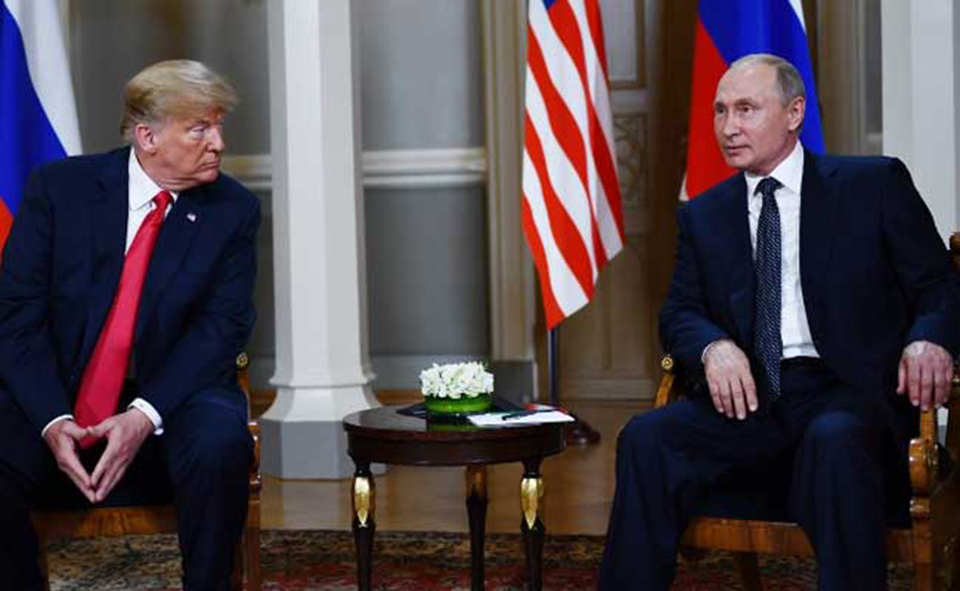 HELSINKI, July 16: U.S. President Donald Trump and Russia’s Vladimir Putin arrived at the presidential palace in Finland for a long-awaited summit on Monday after Trump blamed Washington’s own past “foolishness and stupidity” for bad relations.

The Russian foreign ministry “liked” Trump’s comments on Twitter ahead of the summit, in which Trump denounced the investigation into Russian meddling in American elections as well as previous U.S. policy.

“Our relationship with Russia has NEVER been worse thanks to many years of U.S. foolishness and stupidity and now, the Rigged Witch Hunt!” wrote Trump.

The two leaders were due to start their summit in the Finland capital Helsinki with no one else in the room apart from interpreters. They were scheduled to hold a working lunch accompanied by aides later on Monday before speaking to media.

The Kremlin said it did not expect much from the meeting but hoped it would be a “first step” to resolving a crisis in ties.

“Presidents Trump and Putin respect each other and they get along well,” Kremlin spokesman Dmitry Peskov said. “There is no clear agenda. It will be determined by the heads of state themselves as they go along.”

The summit comes at a time when relations between the two superpowers are widely seen on both sides to be at their lowest point since the Cold War. Trump has repeatedly said it would be in the U.S. interest to improve those ties.

Critics and Trump’s own advisers have urged Trump to use the summit to press Putin hard about “malign” activities, from annexing Ukraine’s Crimea peninsula to interfering in Western elections, to poisoning a spy in England, which Moscow denies.

During a breakfast meeting with Finland’s president before the meeting with Putin in the Finnish capital, Trump appeared upbeat. Asked what he would say to Putin, Trump said: “We’ll do just fine, thank you.”

While Trump has been abroad since last week, the special prosecutor investigating allegations that Russia interfered to help him win the 2016 presidential election indicted 12 Russians on Friday for stealing Democratic Party documents.

“WHICH TEAM DO YOU PLAY FOR?”

Trump’s foes at home have been scathing about his apparent refusal to criticise Putin. His 2016 opponent Hillary Clinton tweeted: “Great World Cup. Question for President Trump as he meets Putin: Do you know which team you play for?”

Trump has said he will raise the election meddling but does not expect to get anywhere. He has repeatedly noted that Putin denies it, while also saying that it is alleged to have taken place before he became president.

For Putin, that the summit is even happening despite Russia’s semi-pariah status among some Americans and U.S. allies is a geopolitical win.

The countries are expected to discuss the prospect of extending a nuclear disarmament treaty, and the war in Syria, where Russian-backed forces of President Bashar al-Assad have advanced in the south of the country in recent weeks despite a ceasefire brokered by Moscow and Washington under Trump.

The summit caps a trip abroad during which Trump sternly criticised NATO allies for failing to spend enough on their militaries and embarrassed British Prime Minister Theresa May by saying she refused to take his advice about how to negotiate Britain’s exit from the EU. He referred to the European Union itself as a “foe” in trade, and repeatedly criticised it.

In some of the strongest words yet reflecting the unease of Washington’s traditional allies, Germany’s foreign minister said on Monday Europe could not rely on Trump.

“We can no longer completely rely on the White House,” Heiko Maas told the Funke newspaper group. “To maintain our partnership with the USA we must readjust it. The first clear consequence can only be that we need to align ourselves even more closely in Europe.”

Trump has predicted he will be accused of being too soft on Putin no matter how the summit goes.

“If I was given the great city of Moscow as retribution for all of the sins and evils committed by Russia...I would return to criticism that it wasn’t good enough – that I should have gotten Saint Petersburg in addition!” he tweeted on Sunday.

KREMLIN, July 31: Thousands in Russia protested pending pension reforms over the weekend that would raise the retirement age to... Read More...