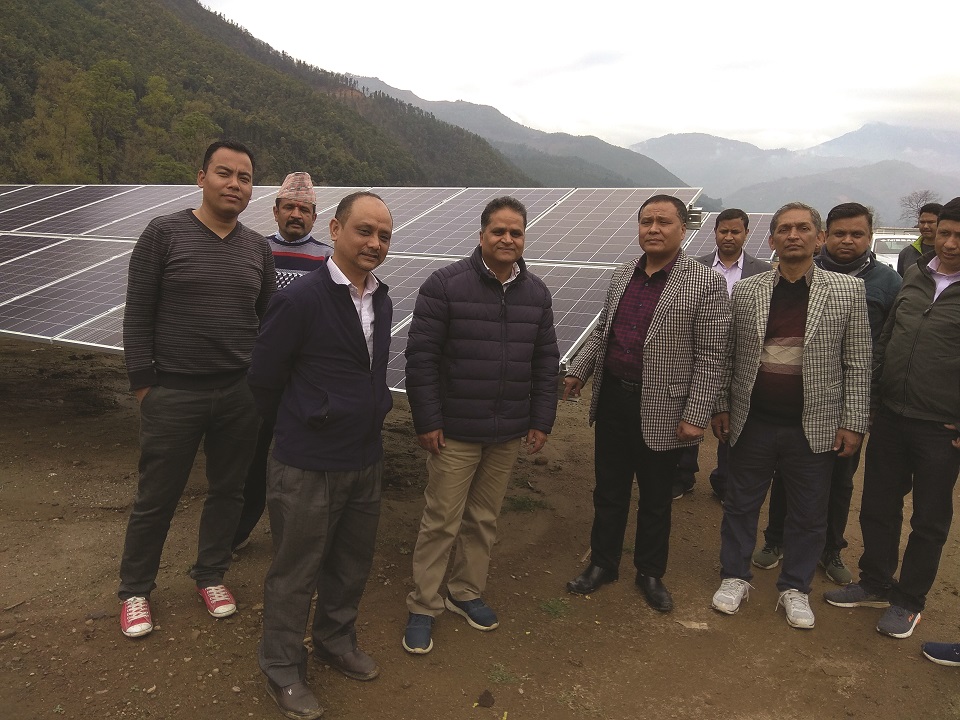 According to project officials, the project having capacity of 25 MW has set a target of generating 15 MW of by April. The project has targeted to generate 10 MW from March-end itself.

The project office has already finalized the site to install solar panels for the remaining 10 MW, they added.

The solar panels have been installed in land owned by Devighat Electricity Center under Nepal Electricity Authority (NEA). Energy generated by the project will be directly connected to the transmission line. It will generate energy only during daytime.

The project is also building a 66 kV substation near the center to evacuate electricity generated by the project.

During a recent inspection visit to the project site, NEA Managing Director Kulman Ghising directed project officials to see if energy generated by the project can be evacuated through the existing 33 kV transmission line. "As the project is expected to start power generation by April, make necessary arrangement for power evacuation even if the substation is not ready. Energy should not go to waste," he added.

“The project is key to manage demand and supply for at least three months before the wet season begins. That is why 15 MW of energy generated by the project should be connected to the grid. NEA will extend all possible help," he told the project officials.

Meanwhile, the contractor company has assured Ghising that 15 MW can be generated by April-end as all equipment have already been brought to the project site.

Minister for Energy, Water Resources and Irrigation, Barshaman Pun, had laid the foundation stone for the project in 2018.

Though the project was supposed to be completed within a year, it suffered delays due to delay in getting design approval, forest clearance and other necessary procedures, according to Ghising.
World Bank has provided a soft loan of US$ 8 million to build the project. Risen Energy, a Chinese company, has won the contract to install the plant. The Chinese company is responsible for design, supply, construction, operation and maintenance of the plant for five years. It will hand over the plant to the NEA after five years.

No sight yet, of proposed permanent dumping site at Bancharedanda

DHADING, June 11: Ten years have gone by since the government announced to construct a permanent dumping site at Bancharedanda for... Read More...

NUWAKOT, April 16: A housing reconstruction project supported by the Indian government has come into force in Nuwakot. The initiation... Read More...

NUWAKOT, May 1 3: An unidentified gang has detonated a gas cylinder bomb at Dhikure of Likhu Rural Municipality- on... Read More...

Why Trump is necessary
23 hours ago