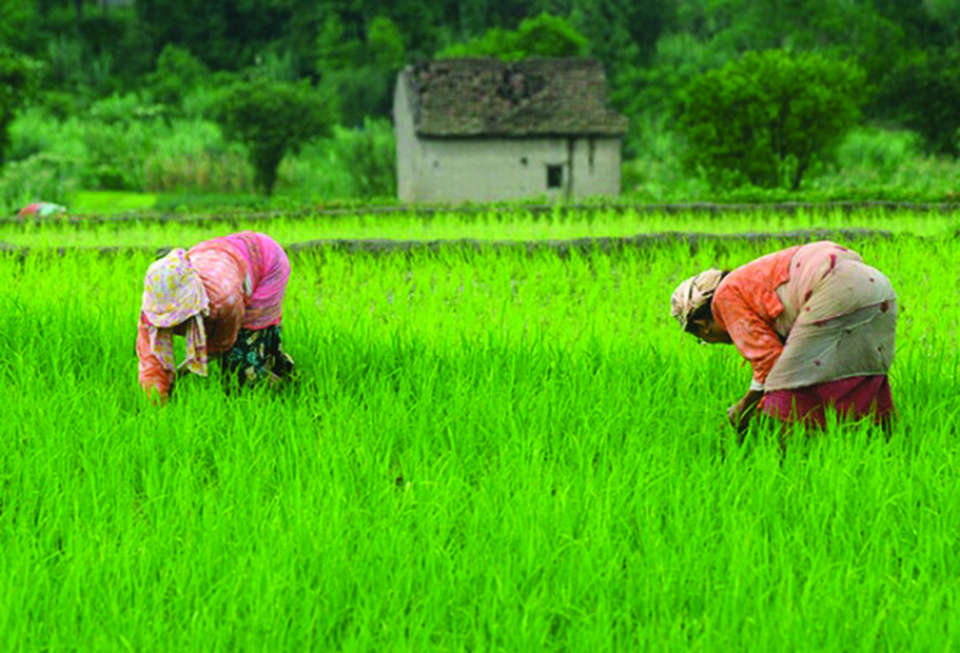 Nepal aims to achieve a double digit growth in the next five years. But this won’t be possible without agricultural revolution

The Third Agricultural Revolution (1930s–1960s) occurred in the developing world with an increase in agricultural production and it is known as the Green Revolution. It involved the introduction of new varieties of crops/commodities, improvement in cultivation practices and better use of production inputs.

Nepal aims to achieve a double digit growth in the next five years. But this won’t be possible without agricultural revolution.

The government should have appropriate programs, and strong commitments for their implementation. We developed good policies like National Agriculture Policy (2004) and Agricultural Perspective Plan (APP) in the past. But they were not properly accommodated in periodic plans. Though most of the periodic plans gave priority to agriculture, the allocation of resources did not always reflect these priorities. For example, one of the six strategies of APP was a technology-based green revolution in agriculture as the initial engine of accelerated growth. But this was forgotten during its implementation.

To commercialize agriculture, we need to consolidate land into a field system which could be more economically and efficiently farmed. Consolidation greatly improves the agricultural productivity of farms by bringing more land into effective agricultural use. Realizing this fact, the APP had recommended adoption of four policy priorities and one of them was land consolidation and land tenure reform, particularly in Tarai. This was not implemented either.

Soil fertility is another important factor to increase production. Therefore special programs should be launched to maintain or improve it.  Soil fertility provides a suitable balance to the crops. Nepal is grappling with a number of soil fertility related problems. Imbalanced use of fertilizers, cropping intensifications, deforestation, landslides and land degradation are some of them. To solve these problems, we need to incorporate organic matter into the soil, improve the quality of farm yard manure, reduce soil erosion and effectively implement land use policy.

In the present context of labor shortage, mechanization of farming is a must to commercialize agriculture. Powered machinery can replace many farm jobs formerly carried out by manual laborers or by working animals such as oxen, horses and mules. It increases farm worker productivity through speed of work with which farming operations can be performed. Mechanization can be partial or complete depending on the local situation and the crops.

Irrigation is the engine of agriculture revolution. Irrigation is one of the major inputs of agriculture which plays an important role in crop production. Nepal’s Tarai plains have huge potential for crop production. With proper irrigation system in place, Tarai can become Nepal’s bread basket in a true sense. The government has set an ambitious goal of offering round-the-year irrigation facility in Tarai in the next five years. We must meet this goal. Currently, only 18 percent of the total agriculture land has round-the-year irrigation.

Fertilizer and seed are other major inputs for agricultural production. According to APP, about half of the incremental output can be attributable to increased fertilizer use while the National Seed Vision (2013-2025) states that improved seed can contribute 20 to 30 percent increment in crop yield.

Unavailability of quality seeds and fertilizers has contributed to low productivity of crops. The government aims to achieve food security by increasing agricultural productivity through assured supply of quality inputs. It is implementing fertilizer and seed subsidy program with special focus on small and marginal farmers. But it is not enough. The government should maintain the buffer stock of fertilizer as envisaged by National Fertilizer Policy (2002) to ensure supply. The seed subsidy program should cover pulses and oilseed crops as well.

Nepal’s topography is agriculture-friendly. Cereal crops can be grown extensively in Tarai plains. As we go higher we have mid-hills where different types of crops can be grown. This is the region where different climates are available. This region is very suitable for crop diversification and horticulture. High hills give us potatoes, temperate fruits and livestock (sheep and goats).

Ecology creates a lot of differences in temperature and commodity and these create a possibility for crop diversification. The Ten-Year Agricultural Development Plan (1975-1985) adopted a regional specialization as cereal in Tarai, horticulture in mid-hills and animal husbandry in the mountains. This specialization was based on the above mentioned ecological conditions. If specialization model was given continuity and modern technologies were used in production, Nepal would have witnessed its agriculture revolution by now and our economy would have been in much better shape.

Nepal has been called an agricultural country for the past several centuries. However, this seems to be limited only to... Read More...

Consumer price inflation remained stable at 7.26 percent as of mid-January: NRB
28 minutes ago