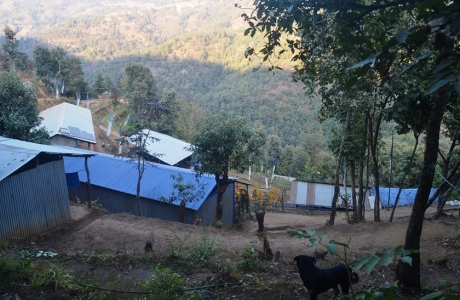 SINDHUPALCHOWK, Jan 10: Police have started a fresh investigation into the alleged killing of a disciple at Bandegaun aashram of Ram Bahadur Bamjam, a self-proclaimed hermit, in the district on Thursday.

A special squad of Central Investigation Bureau (CIB) of Nepal Police has reached Bamjam’s aashram with six sniffer dogs. They have cordoned the aashram and are now carrying out investigation.

Disciple Sanchalal Tamang of Makawanpur had gone missing in the aashram itself. Acting on an FIR field by Tamang’s son Mahendra, police started investigation on the speculations that Sanchalal was buried after murder inside the aashram.

Mahendra filed an FIR at the District Police Office, Sindhupalchowk last Thursday alleging that his father Sanchalal went missing from Bandegaun aashram itself.

A CIB team had raided Bandegaun aashram and investigated the case for two days – last Friday and Saturday.

Mahendra, in the FIR, claimed that his father Sanchalal was murdered and buried along with 20 packets of salt to fast decompose his body.

The CIB team said they found a five feet deep pit filled with loose mud while they were digging the suspicious area inside the aasharm.

Following speculations that the remains must have been removed from the pit and burnt out to destroy evidences, sniffer dogs have been used, said police sources.

There have been accusations that a total of five disciples including Sanchalal have gone missing from Bamjam’s various aashrams.

In the course of searching evidences, a police team from Sindhupalchowk District Police Office led by DSP Bimal Raj Kandel has fanned out to Sindhuli-based Bamjan's aashram. They have taken disciple Indra Bahadur Syangtan of Makawanpur under control for investigation.

Prohibitory orders in Valley extended by a week
10 hours ago

Prohibitory orders in Valley likely to be extended by a week, CDOs to take final call later today
14 hours ago

In scary scene at Euro 2020, Eriksen collapses on the field
18 hours ago

As Lumbini Province Assembly endorses govt’s policies and programs, CM claims to have support of 45 lawmakers
12 hours ago

Province 2 governor’s memorandum to chief minister: Cabinet is not inclusive
12 hours ago

One killed, three injured in road accident
17 hours ago

Rs 100,000 each given to families of five children drowned in pond
20 hours ago