Oxen rest in sheds as tractors do the job 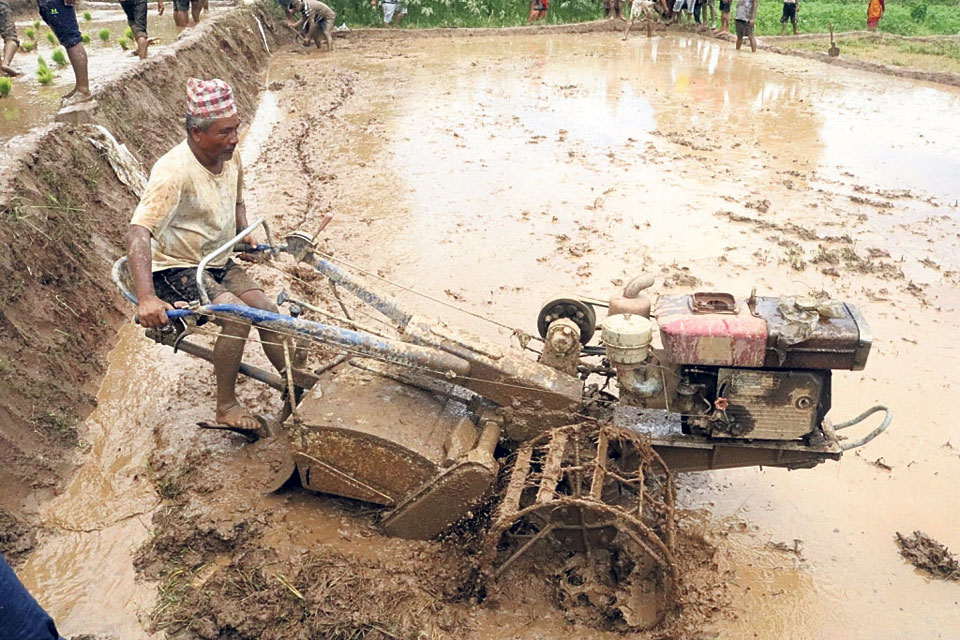 Purnaraj Shrestha, a farmer of Siddhalek using a tractor on his field.

DHADING, Aug 1: Until two years ago, Purnaraj Shrestha of Siddhalek Rural Municipality-6 used to plough his field with a pair of oxen. Now he has replaced the age-old tradition with a tractor. Shrestha says it is more convenient to use tractors instead of oxen. Earlier, it used to take more than a month to plough his fields but now that he has a tractor, it's done in two days. "I think it's good to adopt modern technology," said Shrestha, adding,

"Technology has saved our time and energy." These days he ploughs his fields by riding a comfortable tractor. He uses the tractor to sow paddy, maize, wheat and even vegetables.With the growing use of tractors, farming has become much easier for the farmers. In the beginning, it seemed like a wonderful magic for farmers who were used to struggling with oxen in the fields. However, the effectiveness of tractors has elated and attracted more farmers of late. In the past, managing workers and pairs of oxen during the season would be challenging. Shrestha's family often had to wander from places to places searching for workers and sometimes had to do the fieldwork themselves. As they could not manage to do all the work, they had to leave half of their fields fallow. Fortunately, they no longer have to go through that ordeal.

Shrestha is happy that he no more has to leave his fertile land fallow due to the lack of workers. "It's good that we don't have to search for oxen or workers anymore," said Shrestha. This has left his oxen useless in the sheds. In fact, only few farmers are raising oxen these days.

Modernization and foreign employment has introduced technology to farmers replacing animal and human labor. Modern equipment like tractors, hand tractors, Mini tiller plough have replaced the traditional machines in farming. "As most of the males go abroad for employment, there used to be a shortage of labor. But that isn't a problem now," said Sanjit Tamang, a local farmer. Availability of tractors has offered a respite to the locals.

Ploughing long fields with traditional plough was a backbreaking task for the farmers. It used to consume a lot of time and farmers would often get tired and exhausted by the end of the day. Tractors, on the other hand, are quick and comfortable.

The District Agriculture Development Office has been distributing hand tractors to farmers with reasonable discounts. While some of the farmers have bought tractors on their own, some have sought help from various organizations.

First impression is important, so how can you improve your chances of making a great one when you’re starting a... Read More...

Handling job and education at the same time

One of the most frequent questions students ask themselves when considering working while studying is: ‘Will I be able to... Read More...

Each province to have two medical colleges
21 minutes ago

Kathmandu Metropolitan City: Balen maintains his lead, Sthapit behind by 20,000 votes
2 hours ago