KATHMANDU, June 6: As the hearing on the writ petitions associated with the House dissolution cases resumed on Sunday afternoon at the revised Constitutional Bench, the lawyers pleading on behalf of the government and Prime Minister KP Sharma Oli demanded Chief Justice Cholendra Shumsher JB Rana again review the composition of the five-member bench.

Submitting a petition  to the bench, advocate Raja Ram Ghimire insisted that 11 justices of the apex court not be on the bench to hear the House dissolution case as their presence could ‘impact’ the verdict due to their involvement in various benches prior to this case.

The Supreme Court comprises of 21 justices including Chief Justice Rana.

According to Ghimire, Justice Dipak Karki should not bench the House dissolution hearing as he was involved in issuing orders against the government on a case (077-WO-1118) related to the latter's ‘insufficient efforts’ to combat COVID-19. Similarly, he also ruled in favor of the President’s Office in the 072-Wo-0015 case.

Justice Mira Khadka should not be included in the bench, according to Ghimire, as she issued a verdict in favor of CPN (Maoist Center) and Nepali Congress in the 073-WF-0023 and 073-FN-0597 cases. Khada’s verdict on 072-WO-0015 also does not allow her to be on the bench, Ghimire said in his petition.

Similarly, Justice Hari Krishna Karki’s verdict on the 072-WO-0015 case and Justice Bishwambhar Shrestha’s involvement in 0077-WC-0028 may impact the ongoing hearing if they are included in the bench, advocate Ghimire argued.

Ghimire, while tabling his petition, argued that Justice Ishwar Khatiwada, passing a verdict in favor of Maoist Chairman Pushpa Kamal Dahal in the 073-WO-1184 case and another Justice Anada Mohan Bhattarai, who ruled the government to bring back its citizens from abroad amid the COVID-19 pandemic, should also not be seated on the bench.

As Justice Anil Sinha was involved in three other benches (077-WC-0028 and 76-WO-966/0974) and Justice Prakash Man Singh Raut in the bench hearing 073-WF-0023 and 073-FN-0597 cases, their inclusion in the Constitutional Bench would also create controversy, said Ghimire, who himself filed a writ petition at the Supreme Court demanding that CPM-UML Chairman KP Sharma Oli be appointed as the prime minister as per Article 76 (5).

President Bidya Devi Bhandari, on May 21, dismissed the claim made by Oli to form a new government. Oli claimed that he had the support of 153 lawmakers of the lower House of parliament --- 121 from UML and 32 from Janata Samajbadi Party (JSP) -- while staking claim to the government. Nepali Congress (NC) President Sher Bahadur Deuba also laid his claim with the support of ‘149’ lawmakers. His claim, too, was rejected.

Advocate Ghimire said that Justices duo Sapana Pradhan Malla and Tej Bahadur should not be included in the bench as both of them were a part of a bench which was formed to hear the House dissolution case when parliament was dissolved on December 20 earlier last year. The bench termed the dissolution unconstitutional and reinstated the House on February 23.

Similarly, Ghimire also raised questions over Justice Bam Kumar Shrestha as the latter had invalidated the merger deal between the UML and Maoist Center to form the Nepal Communsit Party (NCP), on March 7.

It is to be noted that CJ Rana, on Sunday, reconstituted the bench including justices Dipak Kumar Karki, Dr Anand Mohan Bhattarai, Mira Dhungana, Ishwar Prasad Khatiwada and the chief justice himself after a controversy erupted when a lawyer of Nepali Congress (NC) President Sher Bahadur Deuba raised questions over two justices picked as members of the Constitutional Bench in view of their previous decisions on the case of reviewing the CPN unity and registration.

After lawyers raised questions over the justices on Sunday, CJ Rana asked them to have trust in the bench. He was of the view that none of the justices can be on the bench to hear any case if such a series of questions continues. “I ask you either to withdraw the petition or face a contempt of court charge,” CJ Rana warned the lawyers. 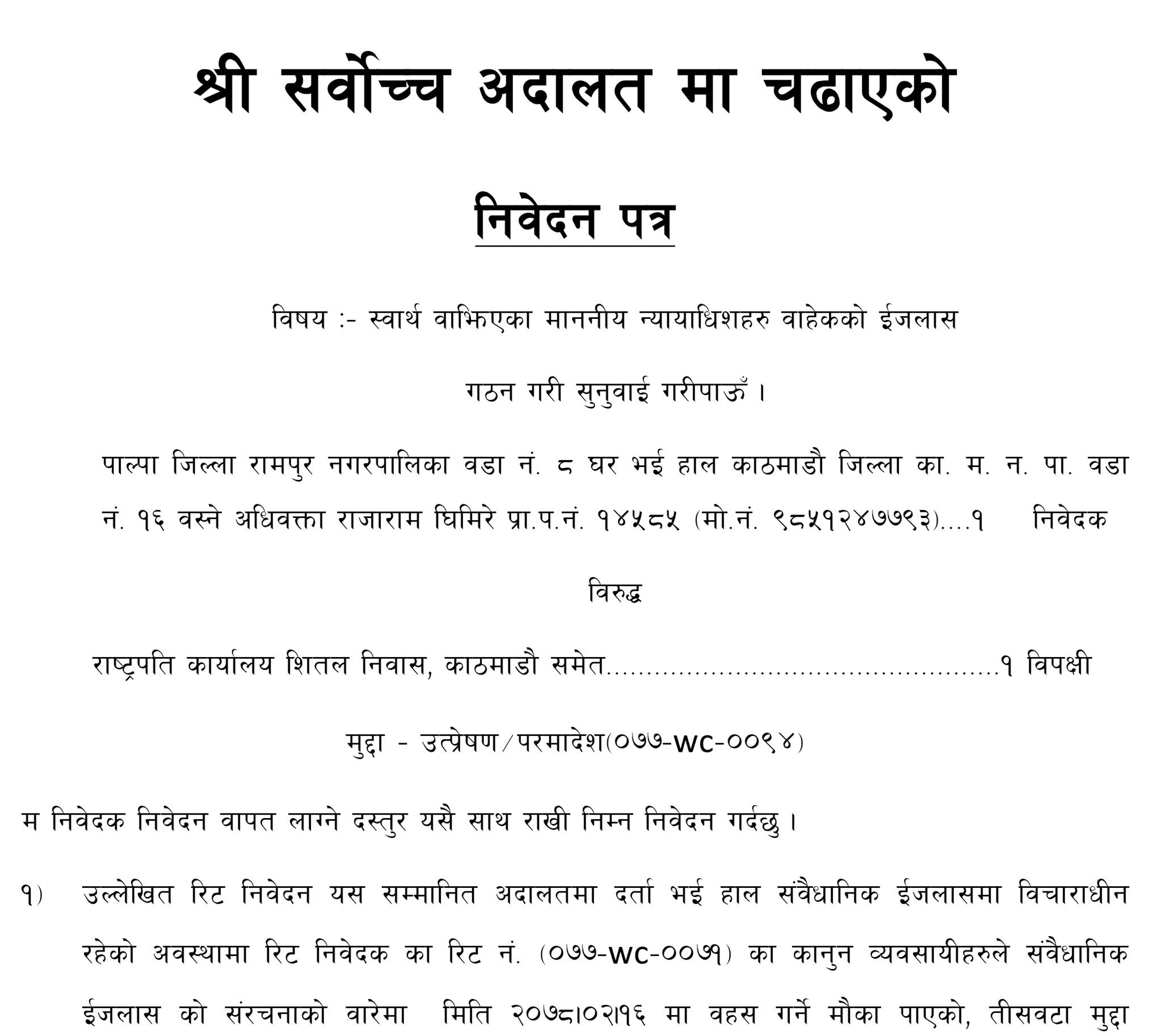 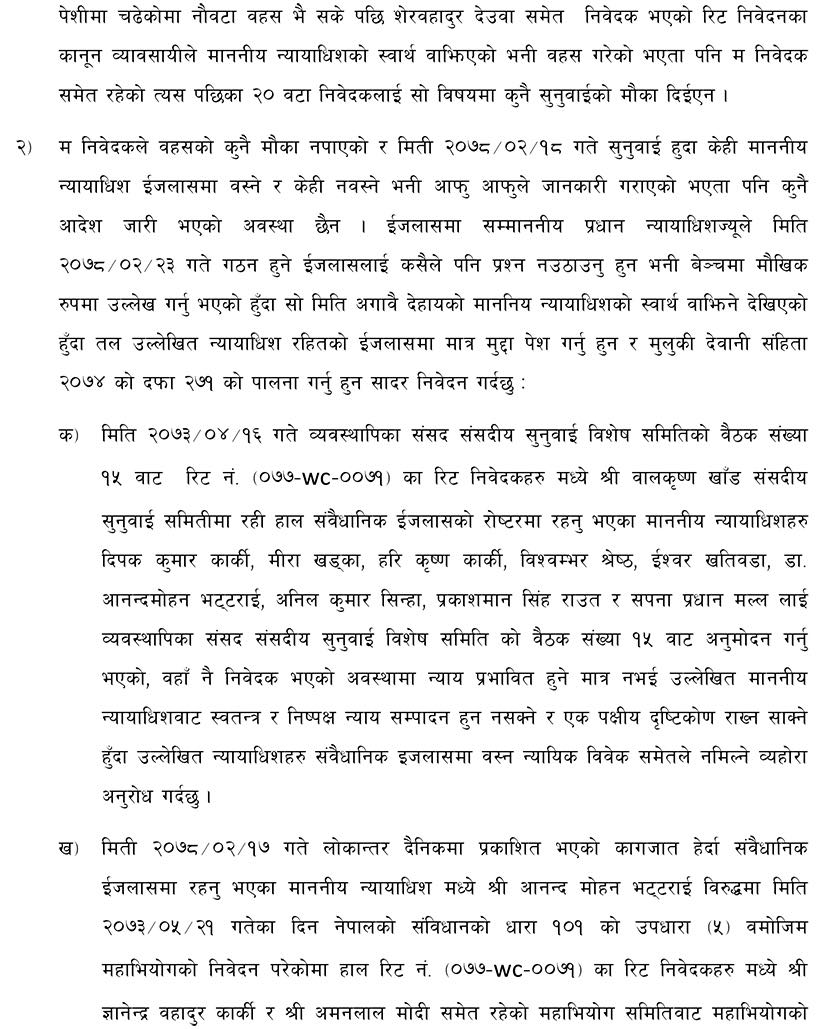 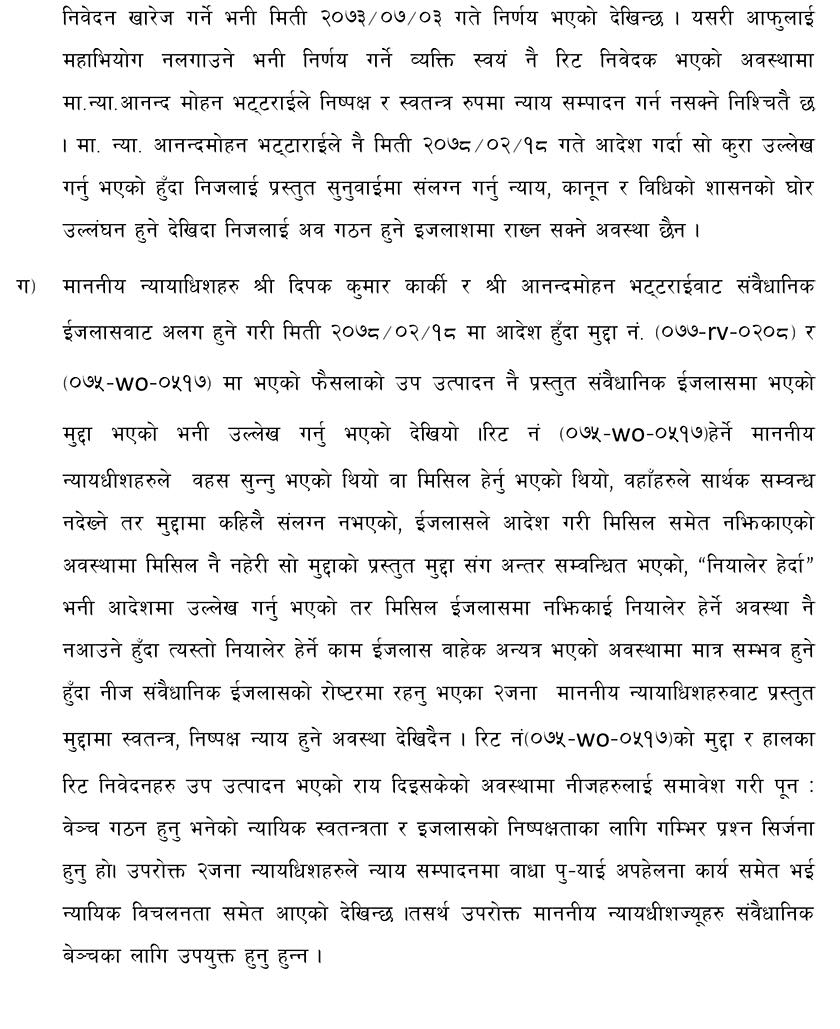 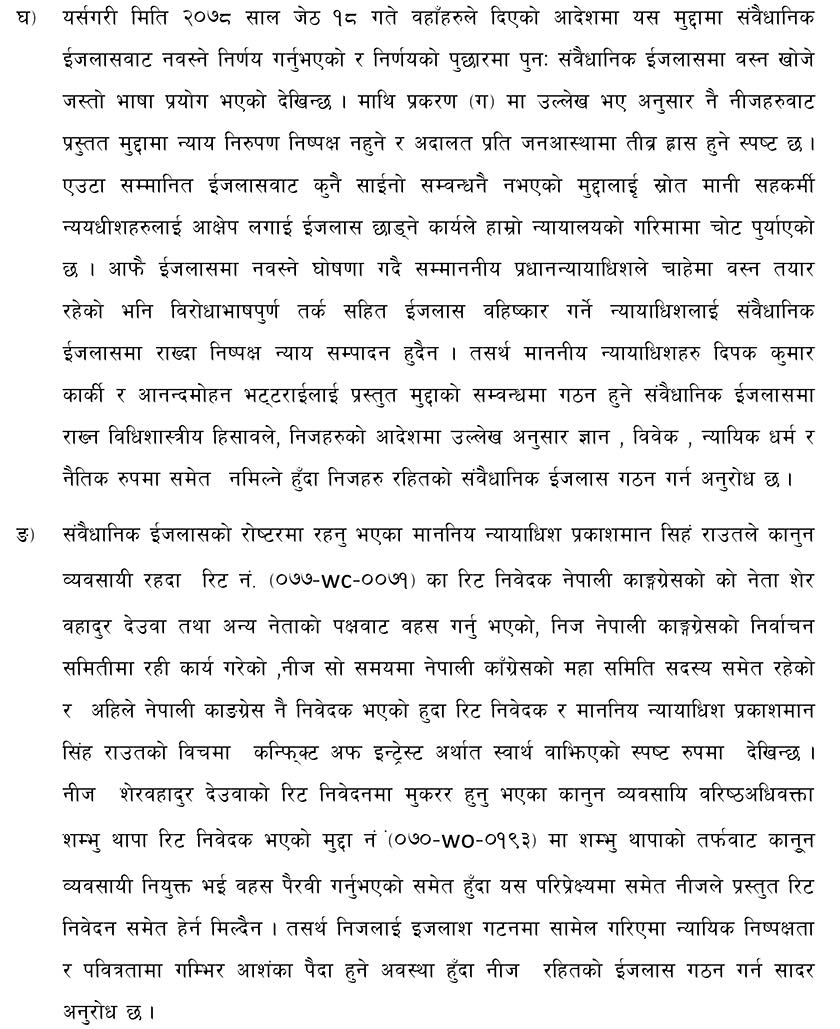 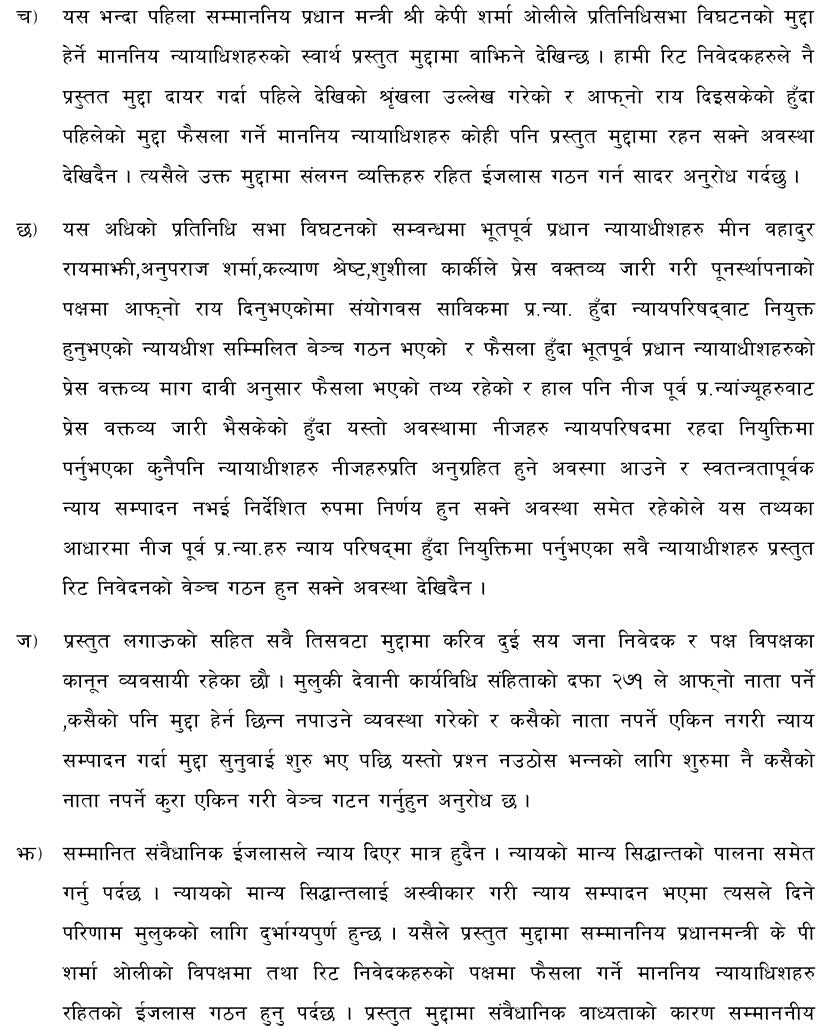 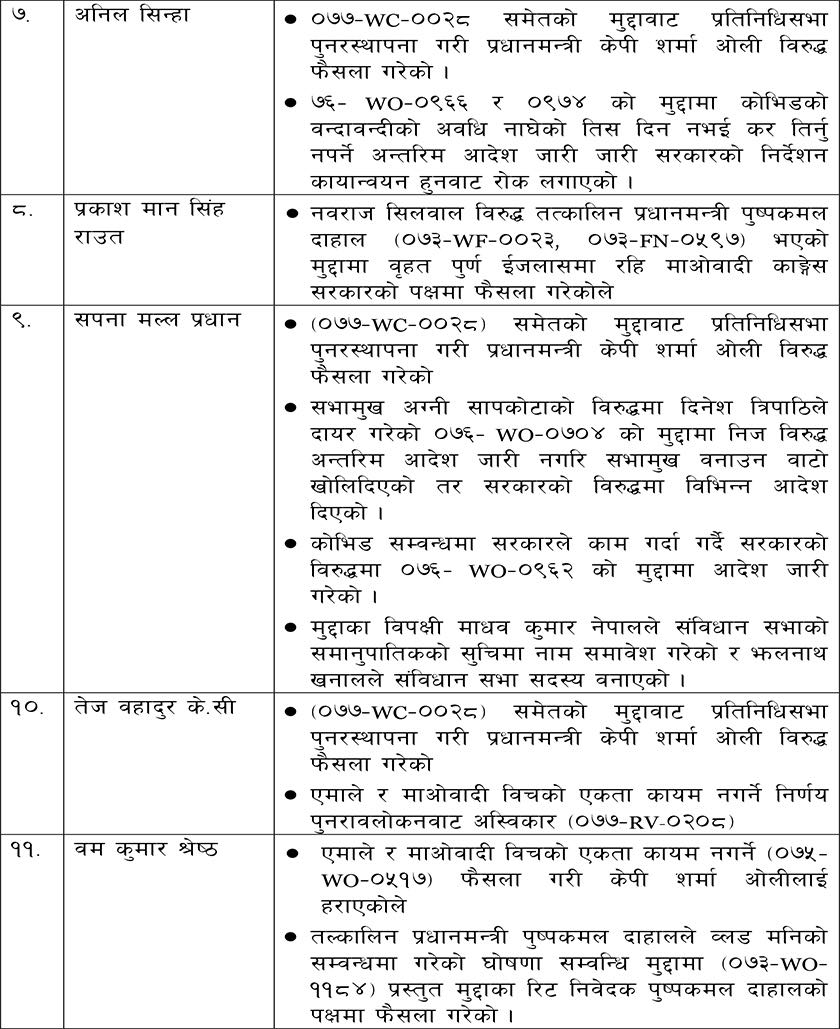 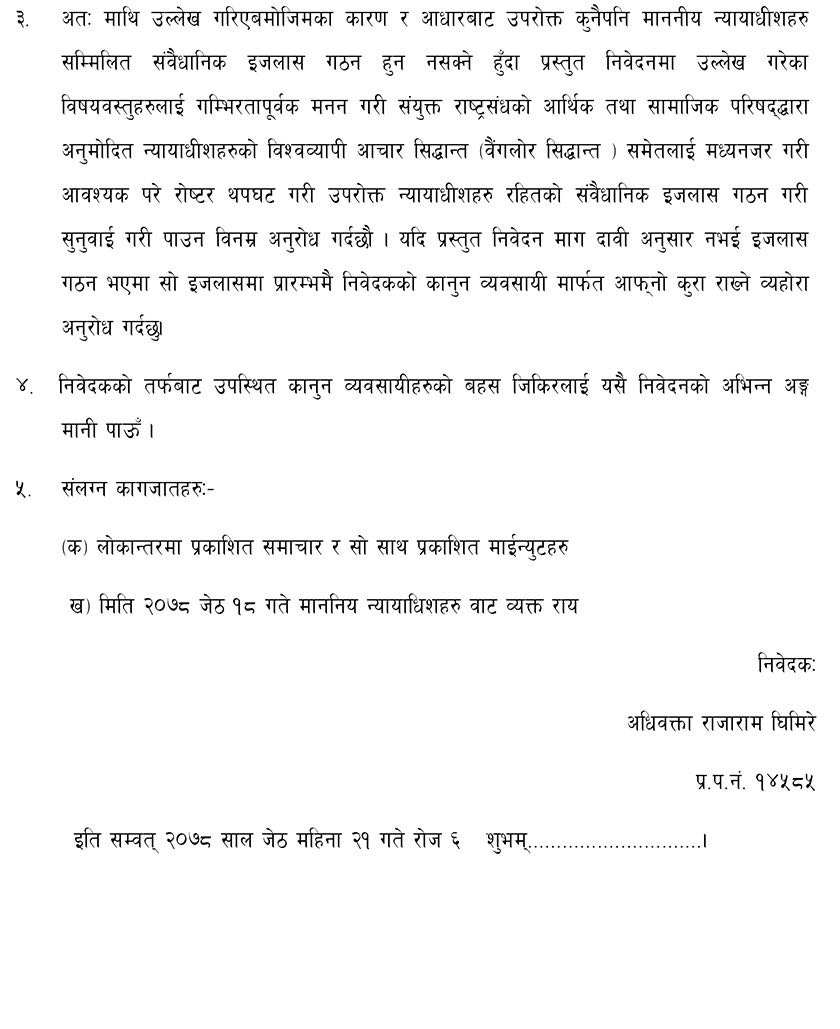 Hearing on writ petitions against House dissolution to continue on Monday