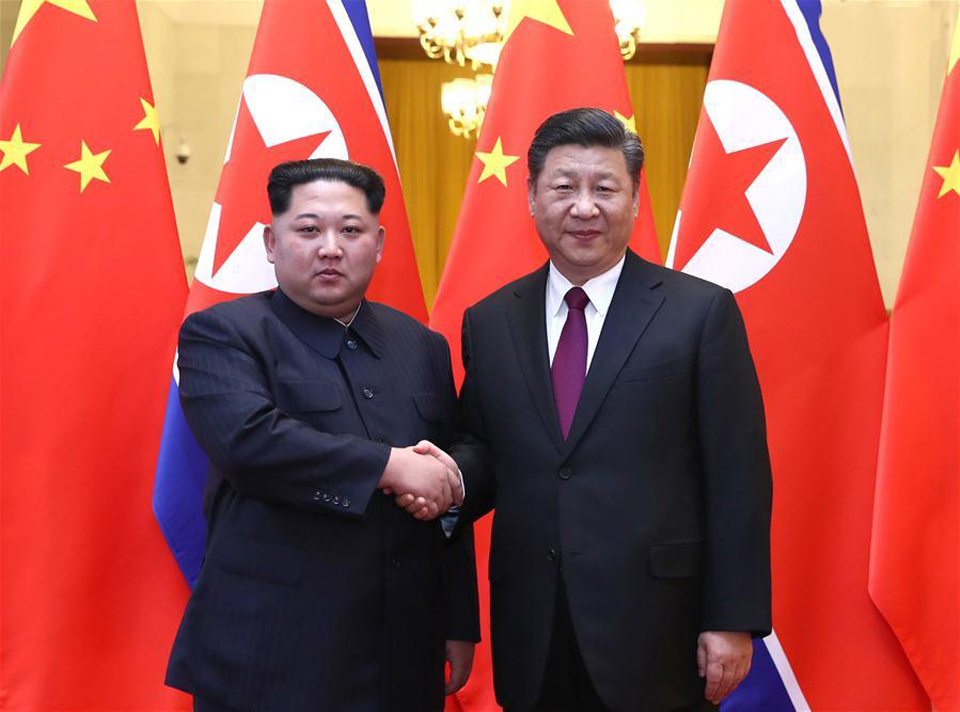 BEIJING, Jan 8: North Korean leader Kim Jong Un arrived in Beijing on Tuesday at the start of a four-day visit, in what’s likely an effort to coordinate with his only major ally ahead of a second summit with U.S. President Donald Trump that could happen early this year.

A long motorcade including motorcycle outriders reserved for state leaders left a Beijing train station shortly after the arrival of an armored train consisting of 20 to 25 cars — most of whose windows were blacked-out — along tracks lined by police and paramilitary troops.

Kim’s trip, announced earlier by both sides, comes after U.S. and North Korean officials are believed to have met in Vietnam to discuss the location of a second summit.

Beijing’s North Railway Station was cocooned in security, with dozens of police and paramilitary troops patrolling outside.

Kim is expected to stay at the highly secure Diaoyutai State Guest House in the capital’s west, with meetings held at the Great Hall of the People, the hulking seat of the legislature that sits next to Tiananmen Square.

The trip marked a further break with past practice in that it was announced in advance of Kim’s arrival, a possible sign of growing confidence on the part of North Korea and China, the North’s most important trading partner and a key buffer against pressure from Washington.

After years of cool relations following Kim’s assumption of power 2011, ties have improved remarkably over the past year as Xi seeks to maintain his influence in the region.

Kim’s trip comes as the U.S. and North Korea look to settle the North’s decades-long pursuit of a nuclear arsenal.

The U.S. and North Korea seemed close to war at points during 2017 as the North staged a series of increasingly powerful weapons tests that brought it closer to its nuclear goal of one day being able to target anywhere on the U.S. mainland.

Possibly fearing the economic effect of crushing outside sanctions imposed over his weapons tests, Kim abruptly turned to diplomacy with Seoul and Washington last year. He also visited China three times, notably without a reciprocal visit from Xi in a break with diplomatic convention.

But even after what was seen as a blockbuster summit between Kim and Trump in Singapore last June — the first ever between the leaders of the war enemies — there’s been little real progress in nuclear disarmament.

Washington is pressing North Korea to offer up a detailed accounting of its nuclear arsenal, while the North says it has already done enough and it’s time for the U.S. to ease the harsh international sanctions that hold back the North Korean economy.

Chinese foreign ministry spokesman Lu Kang gave no details about China’s role as an intermediary between the U.S. and North Korea, but said Beijing remained supportive of all efforts toward a solution.

“We always believe that, as key parties to the Korean Peninsula issue, it’s important for the two sides to maintain contact and we always support their dialogue to achieve positive outcomes,” Lu told reporters at a daily briefing.

He said further information about Kim’s activities, the outcome of his meetings and a possible Xi visit to North Korea would be “released in due course.”

Trump has offered assurances that another summit will allow him and Kim to make a grand deal to settle the nuclear standoff and change a relationship marked by decades of animosity and mistrust.

However, outside analysts are highly skeptical that North Korea will easily abandon a nuclear arsenal constructed in the face of deep poverty and likely seen by Kim as his only guarantee of regime survival.

Instead, Kim may be seeking to gauge China’s attitude toward sanctions ahead of the talks, including what North Korea would have to concede in order to win Beijing’s support at the U.N.

China, a veto-wielding permanent member of the U.N. Security Council, has agreed to several rounds of punishing economic sanctions against the North. However, Xi has called on the sides to “meet each other halfway,” and China’s foreign minister in September urged some form of sanctions relief in response to any positive outcomes from the first Kim-Trump summit.

North Korea has held off on additional nuclear weapons and missile tests for more than a year, possibly in response to China’s displeasure, while carrying out its new diplomatic offensive.

“The two leaders will further communicate over the issue of sanctions to further refine their previously general and vague attitudes,” said Cheng Xiaohe, professor at Renmin University’s School of International Studies in Beijing.

“It is impossible to see the cancellation of all sanctions, but what kind of sanctions can be canceled and what are China and North Korea’s views on that will be discussed,” Cheng said.

Trump has pushed heavily for Chinese support in convincing North Korea to give up its weapons programs, suggesting that could win Beijing better terms in a trade deal with Washington.

Kim’s arrival in Beijing coincides with U.S.-China trade talks in Beijing that seek to end the trade dispute between the world’s two largest economies ahead of a March deadline.

Asked whether China was linking the two issues in an interview Monday with CNBC, U.S. Secretary of State Mike Pompeo said, “The Chinese have been very clear to us that these are separate issues.”

“Their behavior has demonstrated that as well and we appreciate that,” Pompeo said. “China has actually been a good partner in our efforts to reduce the risk to the world from North Korea’s nuclear capability. I expect they will continue to do so.”

Lu echoed those sentiments in his response to a similar question, saying trade talks and the North Korean issues are “not the same thing.”

“Our positions on the trade talks are very consistent and clear and we don’t need any other techniques to help the U.S. to get our message.”

Nepal feels like home to me: Afridi
8 minutes ago

Grants for unemployed women
13 minutes ago

Child goes missing in a drain in Kathmandu. Who is responsible?
51 minutes ago