NCP bars its leaders, cadres from airing dissent in public 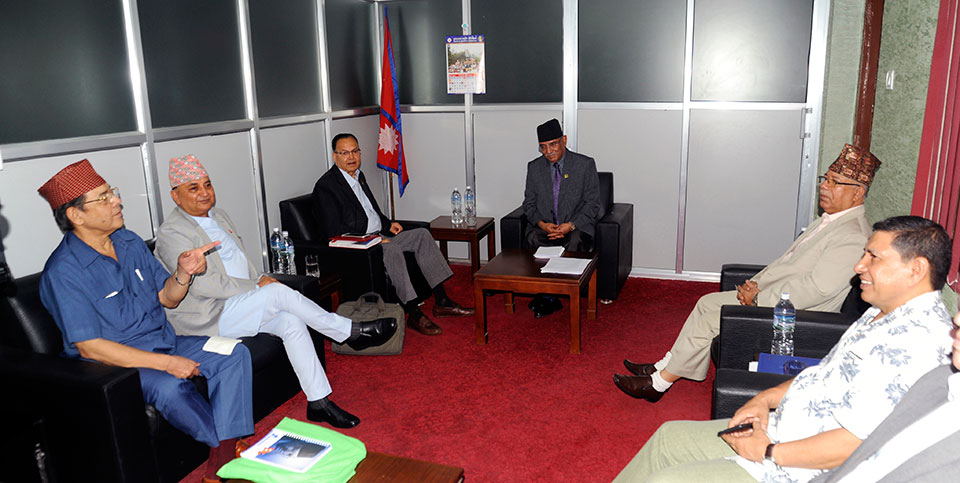 Nepal Communist Party Co-chairman Pushpa Kamal Dahal (center) presides over the party's secretariat meeting at NCP headquarters in Kathmandu on Monday. Dahal chaired the meeting in absence of another co-chairman KP Oli, who is in Singaopre for medical treatment. Photo: Keshab Thoker/Republica

A secretariat meeting of the party held at its headquarters in Dhumbarahi has warned of action against leaders and cadres who violate the new rule. The meeting also instructed its leaders and cadres to use the party’s internal meetings if they have to criticize each other or party’s policies.

Most recently, NCP leaders Surya Thapa and Ram Prasad Sapkota had engaged in a bitter debate in public for days regarding a statement made by party chairman Pushpa Kamal Dahal.

Furthermore, another chairman KP Oli and secretariat member Madhav Kumar Nepal had engaged in an altercation in full view of the media.

“Now onward, any leader or cadre of the party or sister organizations should express their dissent if any only within the party,” said the party’s spokesperson Narayankaji Shrestha.

Monday’s was the first secretariat meeting chaired by Dahal. The meeting decided to induct Kiran Rai, Padam Rai, Devendra Parajuli and Kalpana Dhamala to the party’s central committee. With the new additions, the size of the central committee has reached 442 members.

Dhamala and Parajali were both in the Baburam Bhattarai’s Naya Shakti Party and had defected to the NCP after Bhattarai decided to merge his party with Upendra Yadav’s Federal Socialist Forum Nepal to form Samajbadi Party Nepal.  Likewise Padam and Kiran had recently defected to the NCP from Netra Bkiram Chand’s Communist Party of Nepal.

The meeting has changed the responsibilities of some leaders and appointed a few deputy chiefs to the party’s various department.

Minister Baskota forced to resign in bribe scandal
3 hours ago

I resigned on moral grounds: Gokul Baskota
20 hours ago