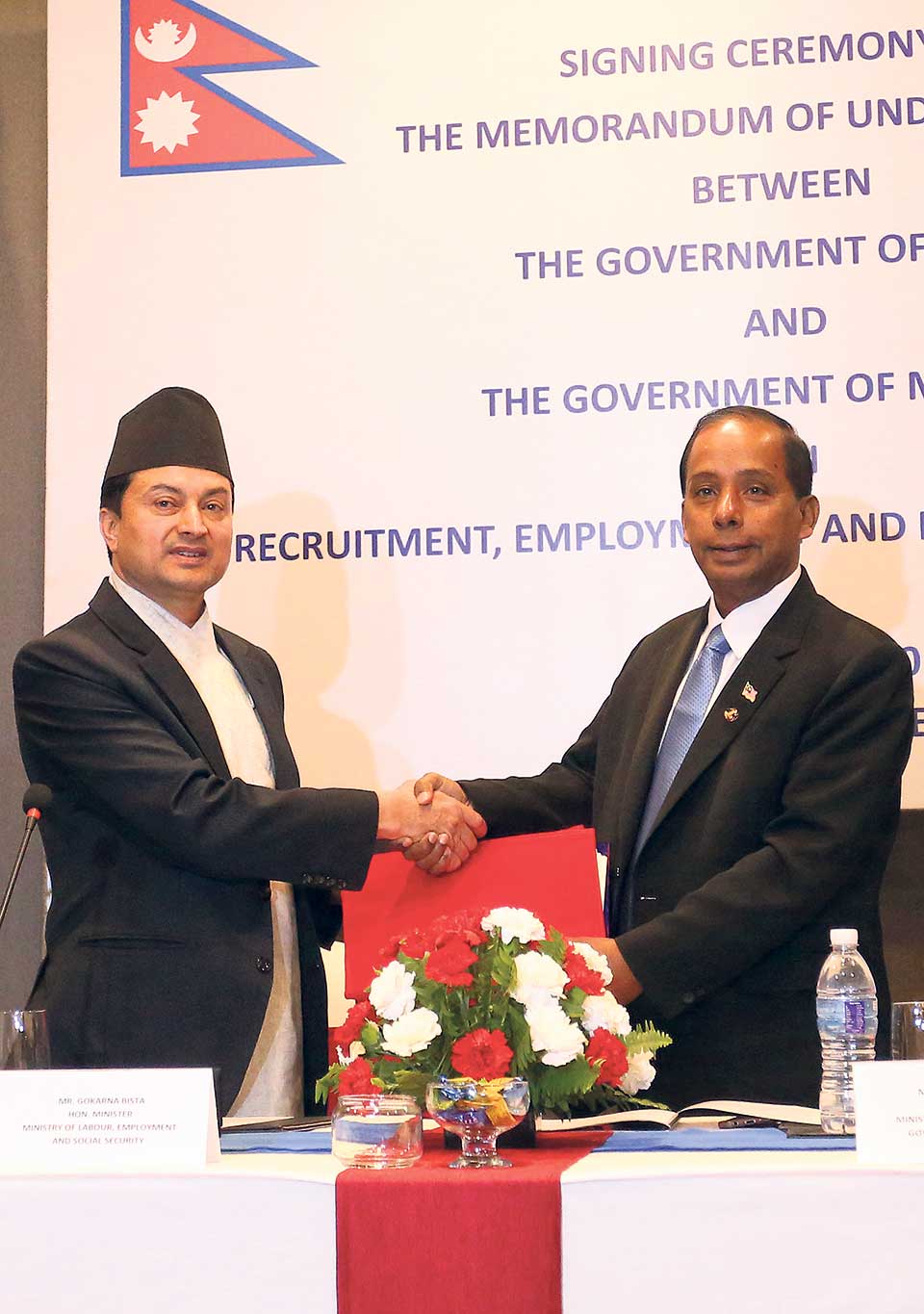 KATHMANDU, Oct 30: The signing of the memorandum of understanding (MoU) between Nepal and Malaysia on Monday has paved the way for resumption of labor exports to Malaysia.

Though officials of both the countries have not disclosed from when Malaysia will resume hiring from Nepal, a joint technical team is working on ‘resolving some issues’ to lift the ban imposed by Nepal for labor exports to the South East Asian nation.

“The technical team to implement the MoU will finalize the modality and decide on it,” Minister for Labour, Employment and Social Security Gokarna Bista said, addressing a press meet following the signing ceremony on Monday.

A source at the ministry told Republica that it will take at least one week to resume the process of sending Nepali workers to Malaysia.

Concerned over rising cases of exploitation of workers and exorbitant charged levied by various agencies commissioned by the government for security and medical check-ups as part of visa procedures, Nepal has barred workers from going to Malaysia for employment since mid-May. Amid impasse over reopening of Malaysia for foreign employment, the Nepal government was also pushing the labor pact through as part of the long-term solution over the past five months. Earlier in September, a Nepali delegation had visited Malaysia to finalize the content of the MoU.

The crackdown on agencies collecting exorbitant fees from Nepali workers launched by Minister Bista had also drawn criticisms from some recruiting firms.

Series of correspondences between the two countries and negotiations following the ban on sending workers to Malaysia culminated into the much-awaited signing of the MoU on Monday.

Nepal has been sending workers to Malaysia for the last two decades even though the two countries have not signed any labor agreement yet.

The signing of the MoU to establish a framework on recruitment, employment and repatriation of workers is aimed at protecting the rights of both workers and employers, according to senior officials of the two countries.

One of the key accomplishments for Nepal through the MoU is to spare worker from shouldering any financial burden to go to Malaysia for employment. All costs, including airfare, visa fee and recruitment service charge, among others, will now be borne by the Malaysian employers.

While government officials have not said anything about the role of agencies, like the Malaysia VLN Nepal Pvt Ltd, in visa processing which were shut down by Nepal, they are likely to be allowed to continue their works even in the changed context.

However, workers will not have to pay any fee to them as employer companies will have to bear all the costs incurred in the recruitment process.

Malaysia was among the top employment destinations for Nepali workers before the ban was imposed by the government. According to the data of Department of Foreign Employment, 29 percent of the total 358,815 work permits, or 104,207 permits, issued in Fiscal Year 2017/18 was for Malaysia.

KATHMANDU, Nov 13: The new labor agreement between Nepal and Malaysia still falls short of meeting the standards set by the... Read More...

KUALA LUMPUR, Malaysia, Feb 18:  At a hospital morgue in Malaysia's capital, the tightly guarded corpse of a middle-aged man has... Read More...

46 dead, 16 hospitalized after trailer of migrants found
7 minutes ago
Stockbrokers permitted to operate their own TMS for online trading of shares
2 hours ago