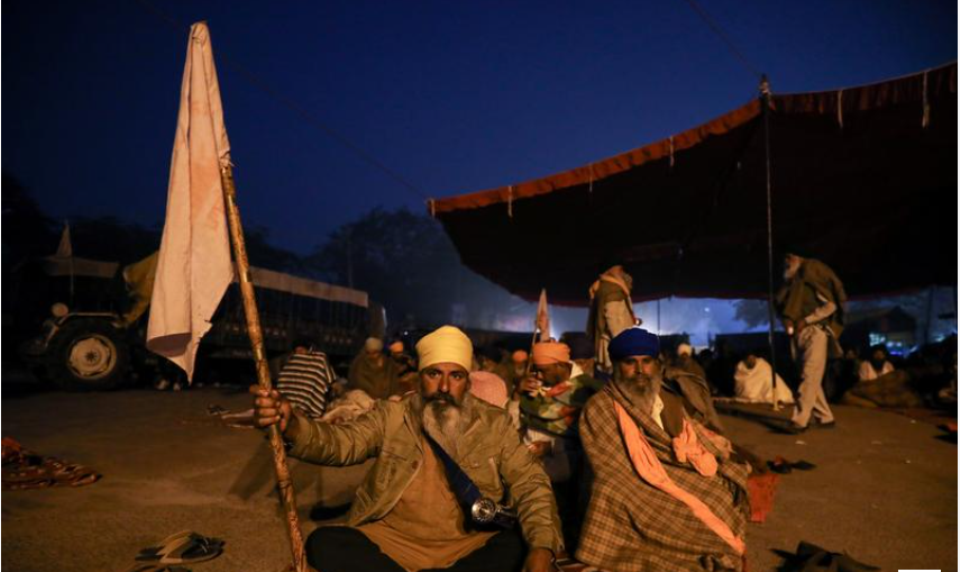 NEW DELHI, Dec 3: Undeterred by the harsh winter of India’s capital, its toxic air and surging coronavirus cases, Sukhbinder Singh is among tens of thousands of farmers camped out in protest on the city’s outskirts, along with tractors, trailers, SUVs and food trucks.

The farmers say they have enough flour, potatoes and other provisions to stay put for six months if Prime Minister Narendra Modi does not meet their demand: a repeal of new laws that he has described as the biggest farm reforms in the country in decades and trade analysts have hailed as a booster shot for the world food market.

The sea of unmasked people at the heavily barricaded protest site on the main highway into northern Delhi is the biggest challenge Modi has faced from India’s politically powerful farmers since he took office six years ago, and is a chink in his otherwise immense personal popularity.

But more than 60 rice, wheat and potato growers from the farm states of Punjab and Haryana told Reuters the government was trying to privatise agriculture by eliminating the agents, who are a vital cog of the farm economy and for thousands of farmers, the main line of credit.

The middlemen provide quick funds for seeds and fertilisers, and even for family emergencies, said the farmers. The agents also help grade, weigh, pack and sell harvests to buyers.

While the farmers camped out on the highway are mainly from Haryana and Punjab, they claim to have support from all over the country. The All India Agricultural Workers Union, which claims to represent millions of rural farm hands, has vowed to launch a nationwide blockade this week to support the demands.

The protesters said a move to eliminate middlemen in the eastern state of Bihar had failed to draw new investment and its farmers were worse off as they often had to resort to fire sales in the absence of organised wholesale markets.

“Some landholders from Bihar now work our farms,” said 45-year-old Sukhbinder Singh, who said he grows wheat, potatoes and mustard in his 20-acre farm in Haryana.

By his side, another farmer made tea next to his tarpaulin-covered trailer stuffed with flour, potatoes, mattresses and blankets.

“This is the time for us to grow winter crops back in the village,” Singh said. “But if we don’t protest now, our next generation will curse us for not fighting the fight. The agents and us are interdependent.”

For Punjab’s Jasbir Singh, a 45-year-old who said he owns 12 acres of land, the middlemen are a lifeline for his farm and his family.

Without all the documents that banks insist on, and based only on the likely future yield of his crop, he says commission agents have been lending him money every year. Ten years ago, it was for his sister’s wedding and this year he took on $5,000 more.

“My son is 21 now, I am sure I will again borrow from them for his marriage,” Jasbir Singh, a tall man with a grey turban, said as young men played cards nearby and others soaked in the winter sun.

As the sun set on the blockaded stretch of the highway watched over by hundreds of policemen, many in riot gear, a small group of farmers called out Modi’s name and shouted: “Say no to dictatorship, say no to Hitlerism”.

The government is holding talks with the farmers to persuade them to end their protest and see the longer-term benefit of the reforms.

“If the farmer finds a buyer who takes the produce directly from the farm, who manages everything from transport to logistics and gives better prices, should not the farmers get the freedom,” Modi told a public meeting.

Many economists, including former government adviser Ashok Gulati, say the reforms would bring fresh investments to the sector.

“The new laws are a stepping stone to modernise India’s agriculture, but the result will not come immediately,” Gulati said. “The government should pro-actively communicate with farmers to explain that this bold step will eventually help them and help Indian agriculture.”

“There is a symbiotic relationship between the two, and for most farmers, middlemen are like ATMs,” Sharma said.

The farmers also worry that after initially paying good returns for their produce, corporate buyers could force down prices.

They are upset the government will not commit in writing to continue a decades-old price support policy for staples such as wheat and rice.

“The government thinks the laws are good for farmers, fine, but if the farmers disagree, then scrap them,” said Paramjit Singh Sarna, a businessman who has been feeding the participants even though his utensil-making factory near the highway is struggling to move its goods because of the blockade.

India fails to end deadlock with farmers, talks to resume next week