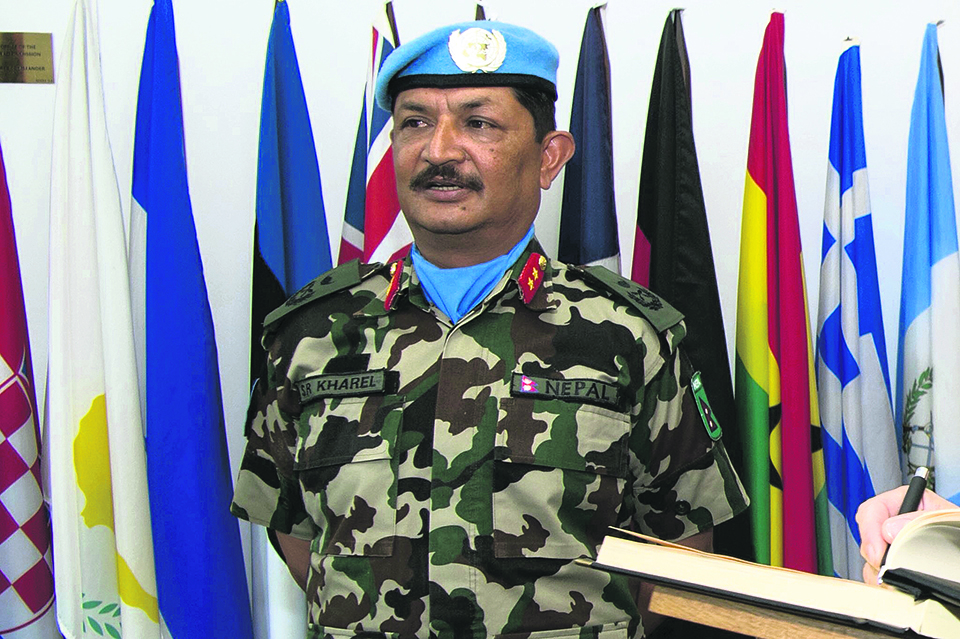 UN Secretary-General Guterres announced the appointment on Wednesday, following an internal selection process from among Deputy Force Commanders serving at various UN peacekeeping missions. The post of Force Commander of UNDOF was laying vacant since the sudden death of Major General Francis Vib-Sanziri of Ghana on April 19, 2019.

During his recent visit to the UN Headquarters in New York, Deputy Prime Minister and Defense Minister Ishwar Pokharel had asked senior UN officials for more representation at the leadership positions from the troops and police contributing countries, both at the headquarters and the fields.

The appointment of Kharel as the acting head of the Mission and Force Commander of UNDOF comes after a senior NA official held the same position nearly four and half years ago. Most recently, the incumbent Chief of Army Staff (CoAS) Purna Chandra Thapa had served as the Head of Mission and Force Commander in the same UN Peacekeeping Mission from 8 February 2015 to 8 February 2016.

According to a press statement issued by the Office of the UN Secretary-General, Major General Kharel has had a distinguished military career at both national and international levels. He recently served as the Deputy Force Commander of the United Nations Interim Force in Lebanon (UNIFIL). Major General Kharel served in a number of high-ranking military positions, including as Director of Staff Duties, Policies and Plans in Nepal Army from 2016 to 2017, Brigade Commander from 2014 to 2016 and Military Assistant to the Chief of the Nepalese Army Staff in 2016.In addition to his peacekeeping experience with UNIFIL, Major General Kharel also served in the United Nations Mission for the Referendum in Western Sahara from 2012 to 2013 and the United Nations Organization Mission in the Democratic Republic of Congo from 2005 to 2006.