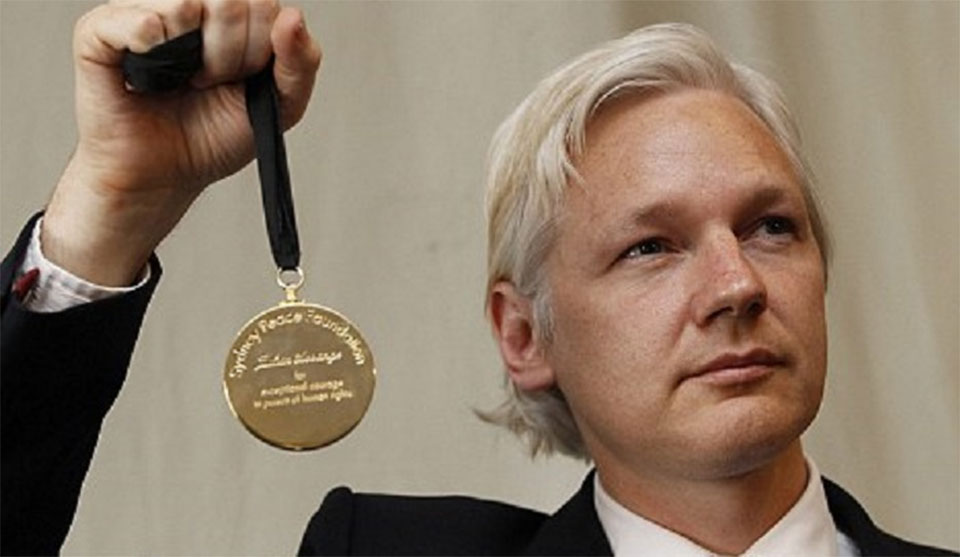 Julian Assange has been nominated for a 2019 Nobel Peace Prize, according to the legal campaign to defend him.

The Defend Assange Campaign tweeted a photo of Assange next to a Nobel coin on the morning of Feb. 18.

Assange was apparently nominated by 1976 Nobel Peace Laureate Mairead Maguire. Former laureates are among the select group who can nominate others for the Peace Prize, which is awarded in Oslo, Norway.

Maguire, who won for her work promoting peace in Northern Ireland during that country’s religious clashes, wrote in the Irish Examiner in January of her decision to nominate Assange.

“Julian Assange meets all criteria for the Nobel peace prize. Through his release of hidden information to the public we are no longer naïve to the atrocities of war, we are no longer oblivious to the connections between big business, the acquisition of resources, and the spoils of war. As his human rights and freedom are in jeopardy the Nobel peace prize would afford Julian much greater protection from government forces.”

An attempt to reach Maguire for comment was unsuccessful.

Nobel Peace Prize nominations are due by Feb. 1, when the Nobel Committee meets to review the nominations. This year, there are 304 candidates nominated for the prize, the fourth-highest number ever.

Assange’s organization, WikiLeaks, was nominated by a Norwegian legislator in 2011, just after WikiLeaks leaked diplomatic cables and logs provided by whisteblower Chelsea Manning.

Assange fears he faces extradition to the U.S. if he leaves the Ecuadorian Embassy in London, where he has been living since 2012. WikiLeaks is reportedly under investigation by Robert Mueller for leaking emails from the Democratic National Committee in 2016, and a court error late last year increased speculation that Assange could be charged separately in U.S. courts, although it is unclear specifically what the charges are.

STOCKHOLM, May 20: The Swedish prosecutor heading an investigation into a rape allegation against WikiLeaks founder Julian Assange filed a... Read More...