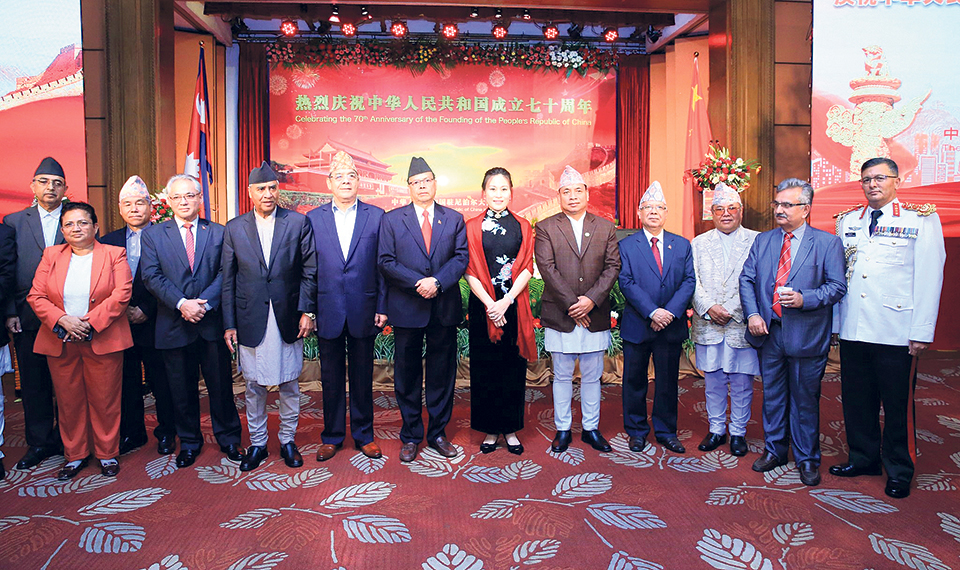 Speaking at a reception organized to mark the 70th anniversary of the founding of the People’s Republic of China in the capital on Saturday, the ambassador said they now look forward to the highest-level visit from China to Nepal. “I believe that more high-level visits will drive bilateral relations between China and Nepal to enter a fresh development stage from a new historic starting-point,” the envoy said.

Hou’s remark comes at a time when the two countries are intensifying preparations for Chinese President Xi’s planned visit to Nepal in mid-October. No Chinese president has visited Nepal since King Birendra in 1996 hosted President Jiang Zemin.

Although date of the visit of President Xi has not been officially announced yet, Xi, according to political leaders and diplomatic sources, will visit Nepal during his visit to India beginning October 11. Sources said President Xi is likely to stay in Kathmandu for a day during his return to China after concluding his India visit.

Ambassador Hou also mentioned that the two countries have reached many important accords on developing traditional friendship between China and Nepal, enhancing Belt and Road cooperation, and developing Trans-Himalayan Multi-Dimensional Connectivity Network during the recent exchanges of high-level visits including President Bidya Bhandari to Beijing in April.

Earlier last month, Deputy Prime Minister and Defense Minister Ishwar Pokharel announced in public that a tunnel connecting Kathmandu’s Tokha with Guruje Bhanjyang of Nuwakot district would be inaugurated during the visit of President Xi. Major deals including those on rail and other infrastructure projects are expected to be signed during Xi’s visit.

While highlighting the socio-economic progress made by her country in the past 70 years, the envoy said “The past 70 years not only witnessed the great development of China, but also China’s achievements to make friends and promote the mutually-beneficial international cooperation.”

For the past 70 years, China continued its efforts to safeguard world peace, contribute to global development, and uphold international order and played an active role in the international arena, she added.