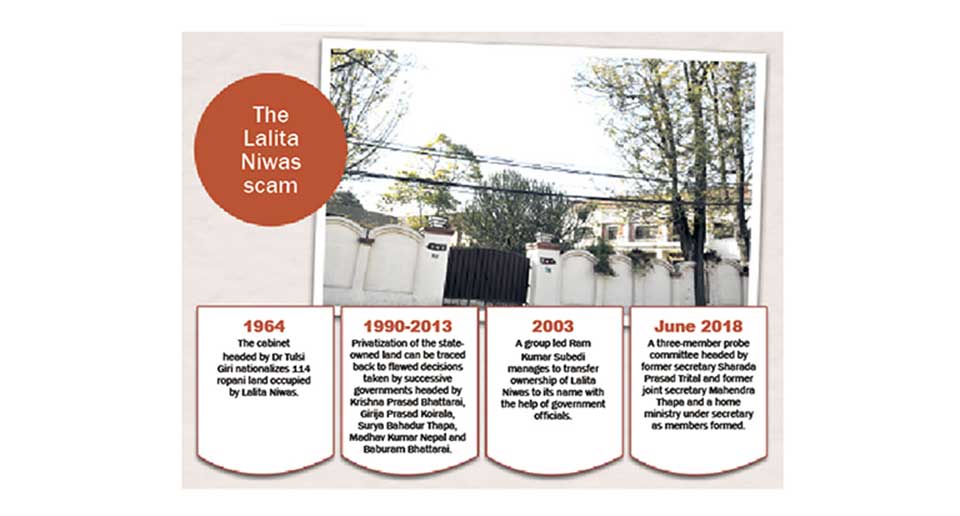 KATHMANDU, April 3: Official records show that the government acquired with due compensation back in 1964 land measuring 114 ropani [5.8 hectares] at Lalita Niwas, Baluwatar, right behind what is now the speaker's residence. Lalita Niwas actually comprised 284 ropani and it was all nationalized back then.

Over the period, the land has been captured by various individuals, including Rukma Shamsher Rana.

The government has now started seriously probing the matter. A special team formed under the Central Investigation Bureau (CIB) of Nepal Police has intensified the documentation process and is seeking out those involved in grabbing the land.

The investigation team 'has already figured out' who are those behind the encroachment and they include Bhim Prasad Gautam, who was land reforms minister in the Baburam Bhattarai government, CIB sources said.

As per a preliminary report, privatization of the state-owned land can be traced back to flawed decisions taken by successive governments headed by Krishna Prasad Bhattarai, Girija Prasad Koirala, Surya Bahadur Thapa, Madhav Kumar Nepal and Baburam Bhattarai.

Acting upon the recommendations of a three-member Lalita Niwas Probe Committee formed by the government, the CIB team is also probing those who served as officers at the Land Revenue Office, Dillibazar between 1985 and 2017.

It was on Dec 2, 1964 that the government had acquired all the Rana palaces with due compensation. Lalita Niwas was also nationalized.

According to Sharada Prasad Trital, a member of the probe committee, embezzlement of national land is not possible without the involvement of the officials concerned.

“The government nationalized Rana palace lands in accordance with the relevant procedures back then. But the 'mafia', middlemen and officials of the land survey and revenue offices gobbled it up .”

According to sources, Subarna Shamsher Rana and his relatives are under close police scrutiny in relation to such lands. The matter has now drawn the attention of the CIAA. The anti-corruption watchdog body is separately carrying out investigations into former officials at the land and revenue office at Dillibazar.

The CIAA had already received a complaint in this connection when Lok Man Singh Karki was its head a few years ago. "But due to political pressure, it couldn't do anything,” a highly-placed source at the institution admitted. The present government wants to recover the land.

According to its spokesperson Pradeep Kumar Koirala, the CIAA has taken the issue seriously. “The statute of limitations does not apply in cases where public or national property has been embezzled,” he said. “Facts are being tallied and evidence collected.”

On 12 March, a cabinet meeting directed the CIB to carry out investigations into the Lilita Niwas case and do the needful. The CIAA was also been notified.

The CIB team has found that then chief of the Land and Revenue Office Dillibazar, Tikaram Ghimire, signed the document transferring the national property to private owners. Then section officer Hupendra Mani KC and non-gazetted staffers Badri Bahadur Karki and Kazi Bista are also under CIB scrutiny. Ghimire retired from the Ministry of Land Management, Cooperatives and Poverty Alleviation three months ago.

The team is collecting detailed information on all those who have any kind of link with the matter.

According to DIG Niraj Bahadur Shahi, the land nationalized by the government in 1964 went into private ownership when Krishna Prasad Bhattarai headed the then interim government.

“We are investigating how the 'land mafia' privatized the land, and we have special means of getting to the root of the matter,” Shahi said. He indicated that many who are prominent in business and industry will feel the heat once the investigations end.

CIB sources also said that 'the masterminds' behind the land grab include Dr Shova Kanta Dhakal, Ram Kumar Subedi and advocate Yuvaraj Koirala. “Koirala, Dhakal and Subedi are under scrutiny,” the sources said. 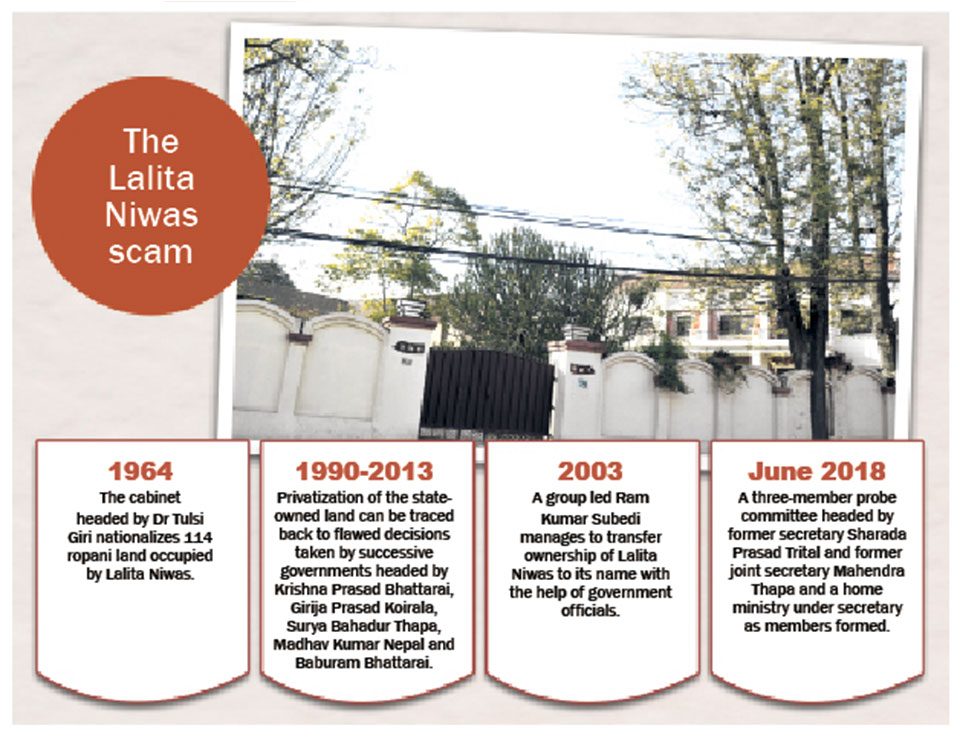