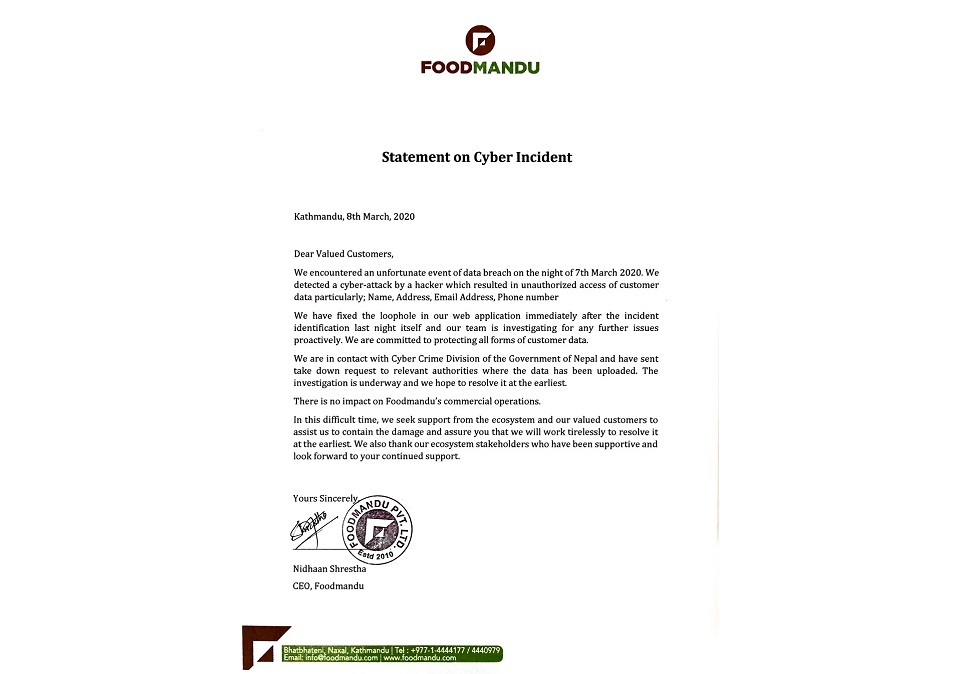 According to a statement released by the company on Sunday, they detected a cyber-attack by a hacker which resulted in unauthorized access of customer data. Names, mailing addresses, email addresses and phone numbers of the users were exposed to cyber attack, according to CEO Nidhaan Shrestha.

A Twitter handle by the name of Mr. Mugger revealed the dump of data of 50 thousand Foodmandu users and also disclosed the link associated with the data.

Foodmandu, on the other hand, informed that they fixed the loophole in their web application immediately after the incident was noticed.

They further stated that they are in regular contact with the Cyber Crime Division and also requested for the security of the dumped data.

Claiming that there is no impact on their commercial operations, Foodmandu in the statement assured to resolve the issue at the earliest.

KATHMANDU, Nov 10: Foodmandu, Nepal's first online food delivery company, which has been in operation since November 11, 2010, has... Read More...

Foodmandu: Quenching the foodie in you!

KATHMANDU, March 8: Anna Khadka of Bhaispati loves the cheese cake from Dhokaima Café in Patandhoka. But she hates travelling all... Read More...

Seven arrested for trying to rob tourist
13 hours ago

Meeting of Maoist Center ends for today, next meeting scheduled for 11AM tomorrow
11 hours ago

Home minister urges industrialists to use indigineous products
11 hours ago