KATHMANDU, June 17: COVID-19 has increased food insecurity by 8 percentage points, a national survey showed. A household-level survey conducted in April has shown that 23 percent of the households had inadequate food consumption, which is higher by 8 percentage points than the Annual Household Survey-(2016/17),  which states that 15 percent of households in Nepal consume inadequate diet.

The Livelihoods, Food Security, and Vulnerability survey covered 4,416 households from all seven provinces. The survey showed that seven percent of households had poor dietary diversity, a rise by 2 percentage points in comparison to the Annual Household Survey(2016/17), which has recorded it about 5 percent.

"Food insecurity across the country has increased slightly compared to estimates taken 3-4 years ago," the report said in its summary.

In line with job loss, a reduction in income was more prevalent for certain livelihood types and households with a migrant worker. Additionally, income reduction was more common among households with a chronic illness and those that are sourcing food through market purchases. 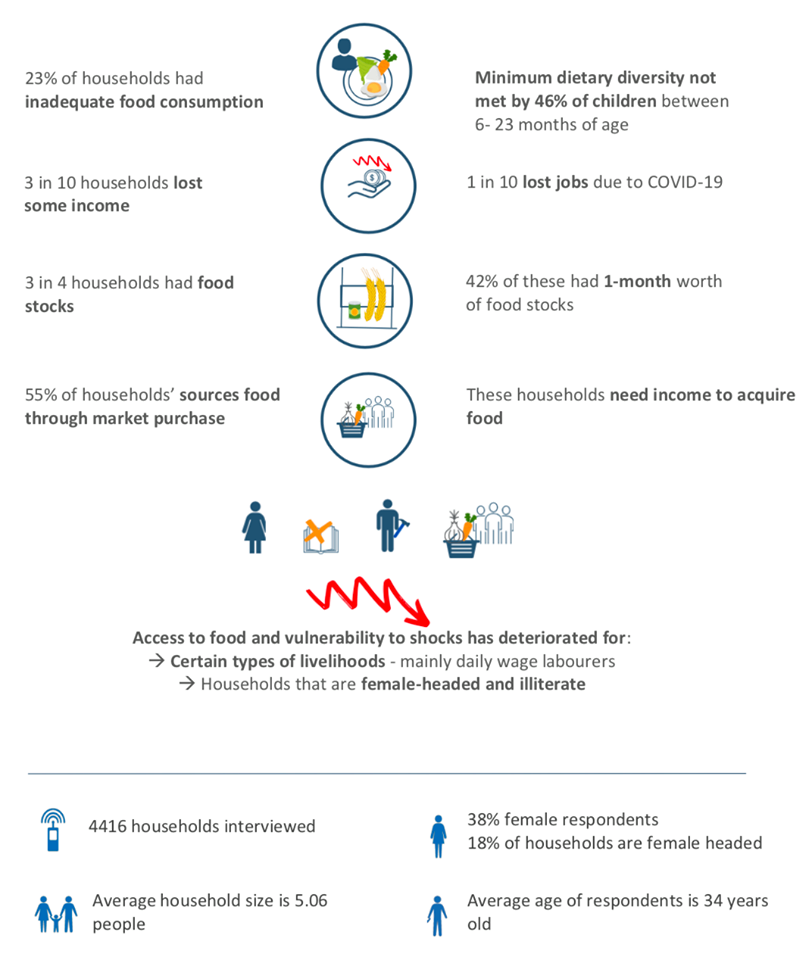 The largest proportion of livelihoods that encountered an income reduction was found among large and medium traders (48%), remittance recipients (46%), followed by daily wage laborers in agriculture and cash crop producers (33%).

Food insecurity was more prevalent among certain types of income sources, namely daily wage laborers and cash crop producers and less diversified livelihoods such as relying on a single source of livelihoods. Higher levels of food insecurity were also observed among households that source food in the market and households that did not have food stocks, the report said.

More than 3 out of 4 respondents reported having food stocks, of which around 42 percent had more than one-month worth of food stock. Meanwhile, about 55 percent of households acquire food through market purchase and around 44 percent consume food from their own production.

Experts say that excessive reliance on the market is risky when the supply chain is broken due to transport constraints. As the survey was conducted after one month of lockdown, the economic implications of COVID-19 pandemic were likely to push a large number of people in a great risk of vulnerability and food insecurity as the lockdown prolonged for a longer period, a senior official at the Ministry of Agriculture and Livestock Development, who was involved in preparing the report said. The 82-days of nationwide lockdown, aimed at containing the spread of coronavirus, was lifted this week.

The household data for the survey were collected from 14 to 24 April 2020 through live telephone interviews using random digit-dialing.

The study was commissioned by World Food Program(WFP) Nepal in cooperation with The Ministry of Agriculture and Livestock Development and with the support from Government of Australia.

Nepal’s Constitution of 2015 provisioned the Right to Food as a fundamental right for its citizens while the Right to Food and Food Sovereignty Act (2018) has detailed out various measures to be taken to ensure the right to food.

BUTWAL, May 21: Nepal has reported the third death due to COVID-19.  A 41-year-old male patient from Madane Rural Municipality-6,... Read More...