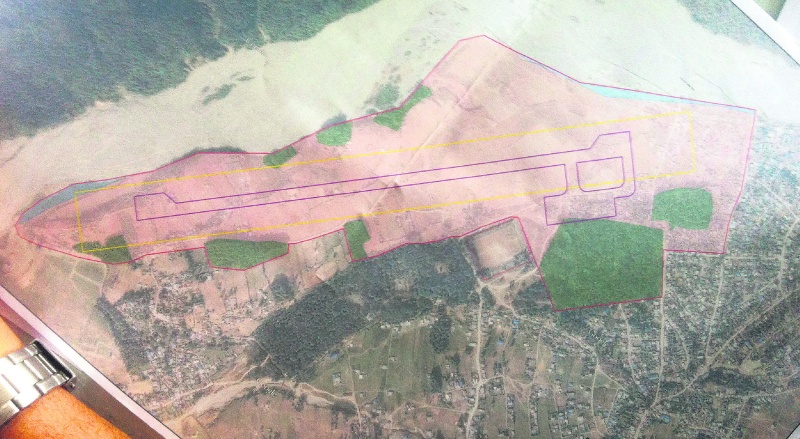 Rs 5.7 billion cost estimated
DHARAN, July 1: The locals of Dharan have been hearing rumors about a new airport for the past 15 years. However, Dharan airport is still limited to reports alone. Recently, a feasibility report of the proposed airport was flashed by Realpath Engineering Consultancy. Instead of the earlier envisioned 700 meters-long runway, now a bigger sized airport is expected to have 1250 meters-long runway. The airport at Dadoghopa now might incur cost of Rs 5.7 billion, the report says.

The consultancy has submitted its report to the Civil Aviation Authority of Nepal (CAAN). Following the proposal in the report, the authority has already asked Dharan Sub-metropolitan City to provide necessary land. As per the report, the airport needs around 60 hectares (93 bigas) of land.

“Now, the feasibility report of a larger airport has been unveiled. It can be viewed as a milestone for the city,” said an official with the aviation authority, Bishnu Prasad Koirala. “Our office has sent letter to the sub metropolis seeking for the required land. If the land is given, there won't be any problem in expediting the construction,” he added.

As per the report, a total of Rs 5.7 billion has been estimated for the construction of the airport. Out of this, Rs 2.2 billion is for compensation to the displaced families. The reports says that 51 hectares of private land has to be claimed. For this, the authority needs to pay Rs 1 to 2 million per kattha of land depending on the location of the land.

“This is an initial report however. It shows that over Rs 2 billion is required just for the compensation of the land. And the rest of the amount is estimated for airport construction,” said Pushparaj Neupane, an engineer with the authority.

According to Neupane, now the first thing to do is to acquire the land. If the government readily provides compensation, acquiring those lands won't be a big issue, he said.

“Now, the first step is to get the land. Since huge area of land is being taken from the people, they need to be paid systematically through smart mechanism of the government. The government should directly pay them off,” he said.

Interestingly, the airport was the main agenda of each and every political party in the local level election. Nepali Congress, CPN-UML, CPN (Maoists Center) and RPP, among others had listed it at the top agenda in their election campaign. As soon as the representatives would be elected, the airport would be in place right away, the parties told the public. This week, the second phase of local elections took place. Locals state that the airport is their dream since long and they expect the local body to give priority to it.

According to the airport project chief Bhaktiraj Sharma, though the airport was a popular agenda among parties, the new report came to surface just now. Now, it has been clear how much land is needed for the airport, he said. “We are clear about the land now. We must move ahead accordingly,” he said.  “In the big area, now there won't be a problem of runway, tower and terminal,” he added.

The consultancy had visited Dharan three months ago and studied about the area with the help of a drone. This had quite escalated the hopes of the locals that the airport construction would start soon.

But the compensation issue does not look that easy. There are squatters in the locality. According to Sharma, the squatters won't be given any compensation but they will be moved to other locations.

“We do have categories of land for which the government would pay compensation. For instance, squatters won't be paid, they will be relocated elsewhere,” he said. “If public support is there, this thing can be solved pretty soon,” he added.

If the airport is constructed as proposed, it can accommodate an aircraft as big as ATR 42.

“We are going to manage everything properly. Be it squatters' issue or others, together we can do it. This is a dream project and actually a long due. If compensation amount is well distributed by the government, it is going to be there within five years,” said CAAN official Koirala.

DHARAN, Jan 5: Construction of an airport in Dharan, which had been halted for more than a decade, has finally resumed. Read More...