A self-proclaimed travel enthusiast, Dongaa reveals that she does all of her vintage clothing shopping during her travel escapades. Till date, she has collected pieces from countries like India, Thailand, Bhutan and Myanmar among others and states that she keeps an eye out for hidden shops that sell old clothing whenever and wherever she’s traveling.

The reason Dongaa named her online store My Ama Wore That was because the kind of clothing she likes, and buys are things that her mother and people her age wear. “I usually get compliments regarding my clothing from people who’re much older than me rather than from people my age,” she says adding that whenever she is unsure about buying a piece, she actually shows it to her mother. If her mother claims that the piece is something she’d wear herself, Dongaa adds the piece to her basket and buys it without a second thought.

Having no intention of even selling these clothes – which she works so hard to find and buy – to people other than her close friends, Dongaa was pushed to open My Ama Wore That by some of her friends. She mentions that she doesn’t really make much profit when she sells vintage clothing online. She says that she only does all this because she genuinely enjoys collecting and wearing vintage clothing and wants to share this joy with other vintage enthusiasts in Nepal.
Even though she was a bit reluctant to start the Instagram store for My Ama Wore That, she’s enjoying running it now. “A few months back, I saw a girl wearing the first shirt I sold from My Ama Wore That. I don’t deliver things myself so I don’t know my customers but because it was an old, one of a kind shirt, I instantly recognized it,” Dongaa recalls adding that seeing other people wear and love the pieces she sells makes her very happy.

But Dongaa also reveals that she has met quite a few people who don’t value vintage apparel and think all of her items are overpriced. She claims that a lot of Nepalis have qualms about buying and wearing clothing that isn’t brand new and think the price of pre-owned clothing should be very cheap. She states that she thinks the current obsession the world has with fast fashion is a huge problem and mentions that most of these products are poorly made and barely last a season.
“I’ve actually seen people sell the same products that a lot of retail houses sell at exorbitant prices in Nepal at footpaths and under the bridges in Thailand. And they come super cheap,” says Dongaa who also believes that a lot of Nepali youths haven’t explored and figured out their personal style and are instantly swayed by any trending style or clothing that they see on social media. She is of the belief that if people were to be sure about their own style and clothing preferences then they wouldn’t be swayed by the trend and end up buying everything they see.

Because she doesn’t know the kind of clothing she will eventually find when she’s traveling, Dongaa mentions that it’s a little tricky to launch collections for My Ama Wore That. If she has a bunch of clothing that have a similar pattern and design, she does put them out as a collective line but more often than not, she only releases single items through My Ama Wore That’s Instagram account.
Dongaa isn’t quite sure what approach she will take to selling vintage clothing in the future. But she does mention that she wants to sell gowns that she designs herself through My Ama Wore That. She’s been wearing a few of these gowns herself for the past few years and reveals that she collects rare buttons with intricate details and adds them onto these gowns to give them the vintage feel.

“I wish today’s influencers would promote vintage clothing the same way they promote fast fashion.
A lot of young people look up to them and if these influencers can show people just how lovely pre-owned pieces of clothing actually are, more people would be interested in them,” she says.

Why wear vintage
Even though a lot of people are skeptical about wearing pieces that have been worn by strangers, here are a few reasons why Dongaa things you should invest in vintage clothing.

They are of really good quality
“Hardly any clothing that gets made today can match the quality of old products,” says Dongaa. She also adds that all of the vintage pieces last years even though they’re pretty old when she buys them herself.

They are environmentally friendly
Dongaa mentions that even though it’s nice that so many eco-friendly brands that support local economy are opening up, she feels if people reused vintage clothing, there wouldn’t be a need for any new brands and products. No resources are needed to wear and modify vintage clothing.
They’re one of a kind If you want to stand out with your clothing or fashion choices among a crowd of people, vintage clothing is the way to go. Because the production of these pieces has already stopped, you won’t find another person wearing the things as you.

How she picks her pieces
Dongaa buys all the vintage pieces thinking she will wear them herself and so she is very conscious about the quality of the products she picks up. She mentions that she always questions the sellers on how long they have been holding onto the pieces themselves and only if the item is in good condition even though it’s decades old, she concludes that it’s of good quality and is durable and buys them.

The shops that sell the kind of clothing Dongaa likes are almost always hidden and only the locals know about them. So, she contacts locals who live in the area she’s traveled to through the CouchSurfing app and locates vintage shops with their help. She also states that if one searches properly, he/she will find priceless vintage clothing in Kathmandu as well. “You just have to be very clear about the fact that you’re looking for really old clothing and accessories when you converse with sellers,” she explains. 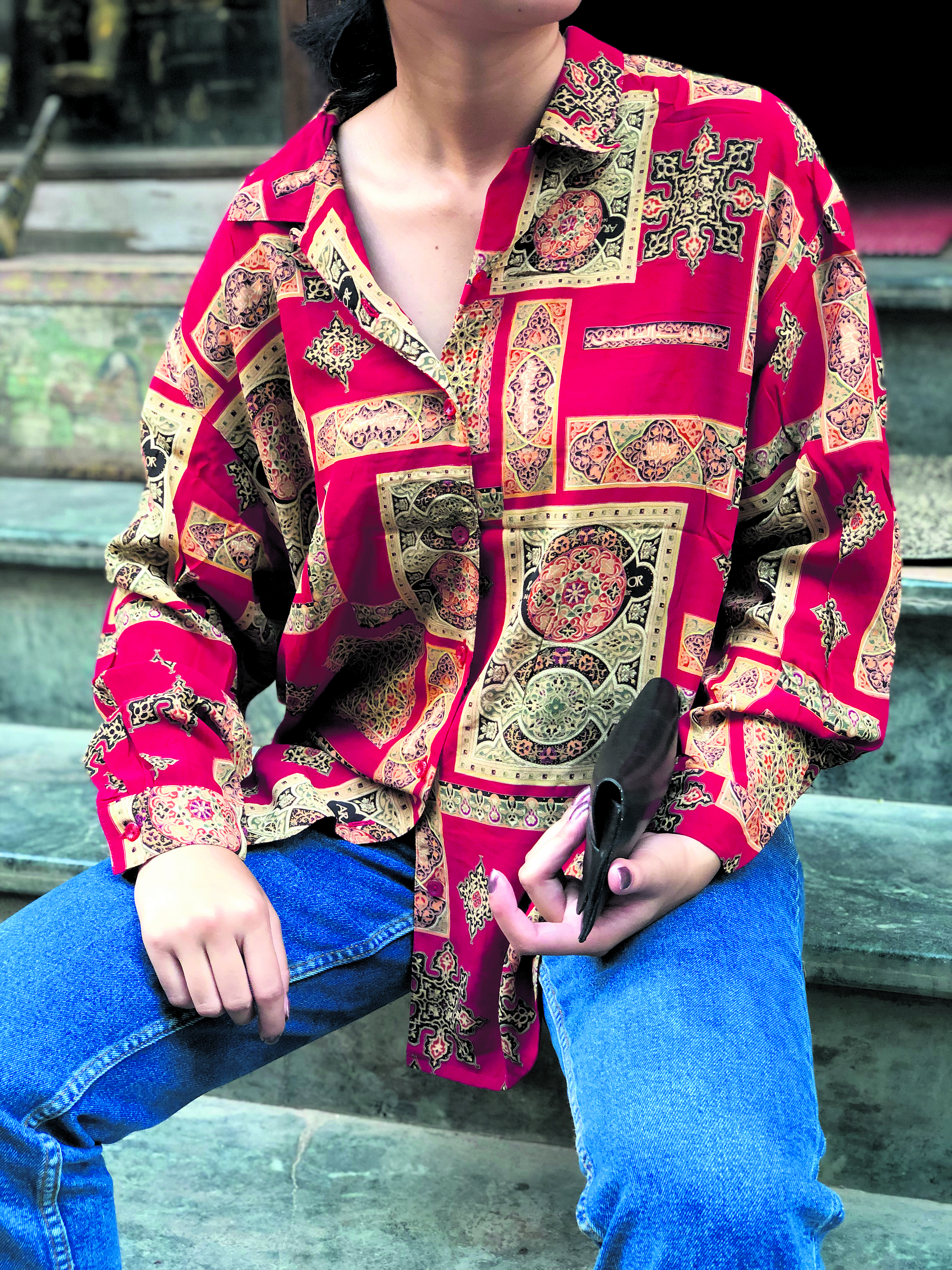 Formal occasions call for dressing up but in Nepal formal wears are limited to elaborate saris and lehengas. Dressing formally... Read More...

It’s very convenient to reach for a pair of jeans and a t-shirt when you are getting ready for the... Read More...