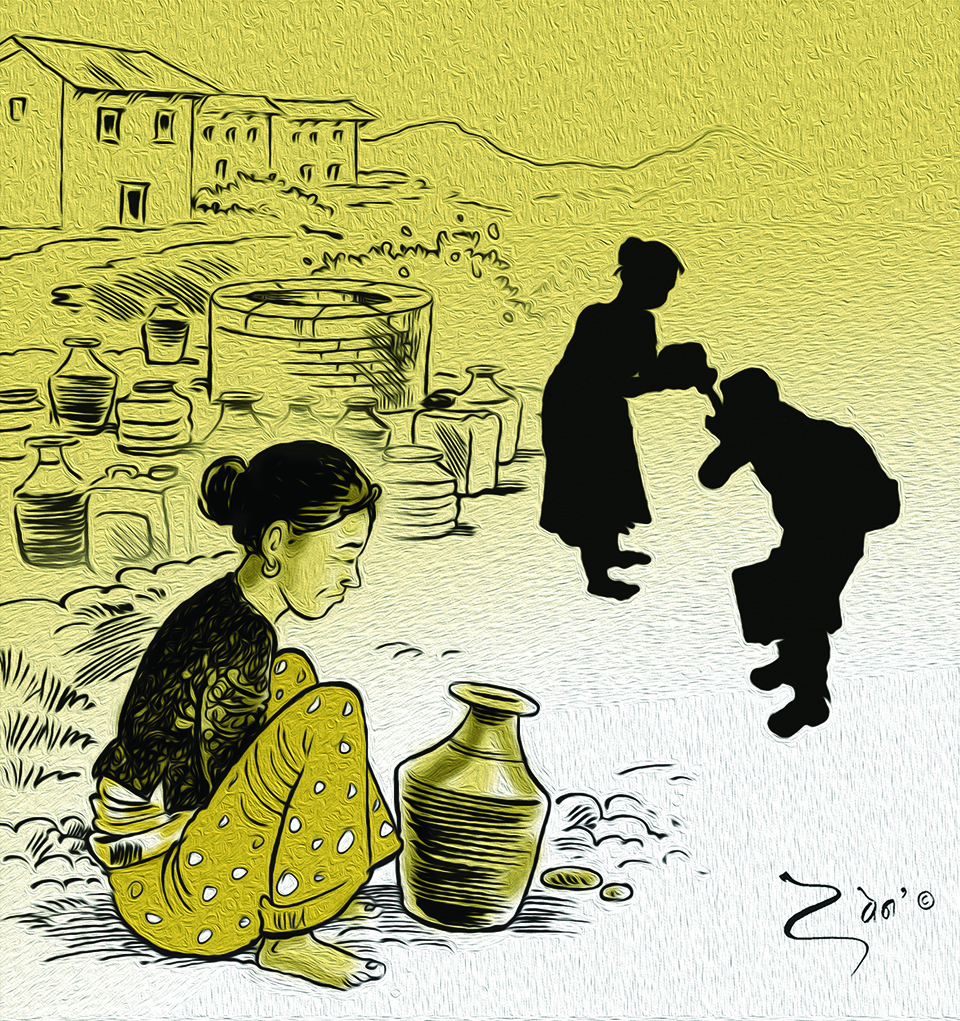 I am Shikhar Gurung, a Nepali-American. I was born into a pleasant community in New Jersey, USA. I play volleyball for my school, Millburn High School in nice furnished indoor gyms that smell like sweat. During my recent stay in Sipaphokhare, a village in Sindhupalchowk, I played volleyball with kids on a court that was made of dirt and had the occasional intruding goat.

I am Logan Hunnicutt and my average day begins with a ride on a smelly New York subway for an hour, fighting for a seat as I try to finish my homework. Just the other day I experienced what it is like for a student in Sindhupalchowk to walk to their coaching class in Sipapokhare after a powerful rainstorm caused small landslides and mud to cover the roads.

We came to Nepal to work with Samata Foundation and teach at a primarily Dalit school in Sipapokhare in order to expand our limited knowledge of caste issues through firsthand experience. This learning experience gave us the opportunity to contribute to the movement for a more equal society in Nepal.

During our stay in Sipapokhare we noticed when walking down to the Dalit village that we stepped into a different world. Their houses were metal boards unlike the multiple stories of concrete we saw in other parts of the village. The area felt a little emptier without the kids playing on the volleyball court or climbing up lychee trees. Digging in deeper, when talking to Khadka Bahadur Tamang we found that the money given out from the village due to the earthquake allowed him to rebuild two houses, but most of the Dalits were barely able to rebuild one house. This has gone unnoticed in the villages with many other representations of discrimination because of the caste-societal separations in the village.

Societal separation is a problem throughout the world. When we walk down the streets of New York it can be seen that most of the areas with most economic prosperity have the least amount of diversity. This is a problem that leads to misconceptions like people of color being viewed by society as though they are not as talented, smart, or capable as white people. But the reason for this economic inequality between white and minority communities is because of the history of marginalization and the stereotypes that still control perspectives of American society today.

We understood the reality of stereotypes in Nepal through our interviews of Dalit families in Sipapokhare. Nara Bahadur Bishwokarma is a 60-year-old blacksmith who makes tools for villagers. He has been working since the third grade when he dropped out of school and started making furniture to support his family. His story, along with many others, disproves the common stereotype that Dalits are lazy and not hardworking.

Those who have control over the knowledge production often define “hard work” as clerical work but the term is much broader than that and includes forms of labor similar to that of Nara Bahadur Bishwokarma.

Next, we spoke to a Dalit woman named Sano Rokka. We learned that her daughter has cognitive disabilities and she is too old to work, so her only income is from her sons who can barely sustain themselves through their own work in Kathmandu. Sano Rokka herself was not the reason for our sadness in the moment, but rather it was the power of discrimination that creates societal separation and crosses the whole world back to our own country.

The social structure of Nepal has caused Sano Rokkas’s Dalit sons to have a hard time creating connections and more sustainable jobs that people of higher caste usually have. In America it is also generally a lot harder for a person of color to get a job just because of their race, causing them to not be able to support their family enough. This causes future generations of minority families to fall into the same situation. In this situation, white people are bystanders, content in their position. In their minds, there is no problem with their actions as long as they are staying silent and not actively oppressing others.

As American founding father Alexander Hamilton once said, “those who stand for nothing fall for anything.” In reality, as long as you are not acting against oppression and speaking up, you are helping it by being passive. In America, white people have more responsibility because of their ability to help minorities with their privilege. Similarly in Nepal, citizens in higher castes also bear the same responsibility.

We live in a world of millions of different cultures, each with problems that need to be addressed. America, for example, has deep racial issues, stemming from centuries of enslavement and general oppression of minority groups. But the caste system can be found all over the world today, not only in Nepal and India. In America, we can see similarities between our society and the caste system in Nepal. According to a 2017 study of 1200 people by Equality Labs, two-thirds of Dalits surveyed in America experience caste-based discrimination in their workplace.

Nepal needs to free itself from social stratification that is largely a product of the reign of the varna system. In order to progress toward change, the focus on young people is significant. The people who have fresh minds not yet clouded by rigid thinking, but open to new ideas for a better society.
As young Americans, this experience helped us gain knowledge about the connection of major problems stemming from different cultures. Gaining knowledge is the basis of activism and change.

This is because gaining knowledge creates awareness which is revolutionary, especially for young people. Nepal needs to emphasize non-discriminatory education that is easily accessible to the youth. If the curriculum and the teachers work together to instill more progressive ideas about caste in the youth of Nepal, then there will be an incentive for the Nepali society to diminish the role of caste in its society.

The streets of the United States of America are swollen with protesters. “I can’t breathe” has become a rallying cry... Read More...

A year before Parasite, an American biographical comedy-drama directed by Peter Farrelly won the Academy awards for best picture. The... Read More...

Caste still a hindrance for Dalits