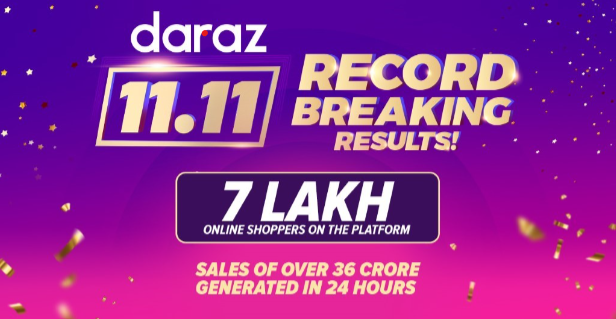 KATHMANDU, Nov 14: Daraz has set a new sales record during the fourth edition of 11.11, serving 0.7 million Nepali online shoppers on the platform within 24 hours. 11.11 generated more than 360 million rupees of sales making it Nepal's biggest one-day shopping event ever.

According to a statement issued by the company, within the first hour of the campaign launch, products worth 60 million were sold, a 130% increase over last year’s first hour achievement. The campaign further witnessed more than 50% of sales through online pre-payment via wallet and bank card, again topping last year’s record.

Similarly, with the first 11.11 order delivered at 8 am of the same day, the company is now fully focused on delivering every single order across 47 cities with more than 1,000 additional delivery riders hired for the campaign along with its seven logistics partners.

Likewise, Daraz has announced that it will bring many of the most popular 11.11 offers and different brand highlights over the next week for shoppers who may have missed out on the biggest one-day sale, following the grand success of 11.11.

KATHMANDU, Nov 11: Daraz, one of the leading online marketplaces of Nepal has officially kicked off its biggest one-day sale... Read More...

Kanchi Maya Koju has represented Nepal in more than 19 international sports competitions as a runner. She created her personal... Read More...

KATHMANDU, August 28: Government-operated fair price market has decided to provide discount of Rs 10 on a kilogram of ghee or... Read More...