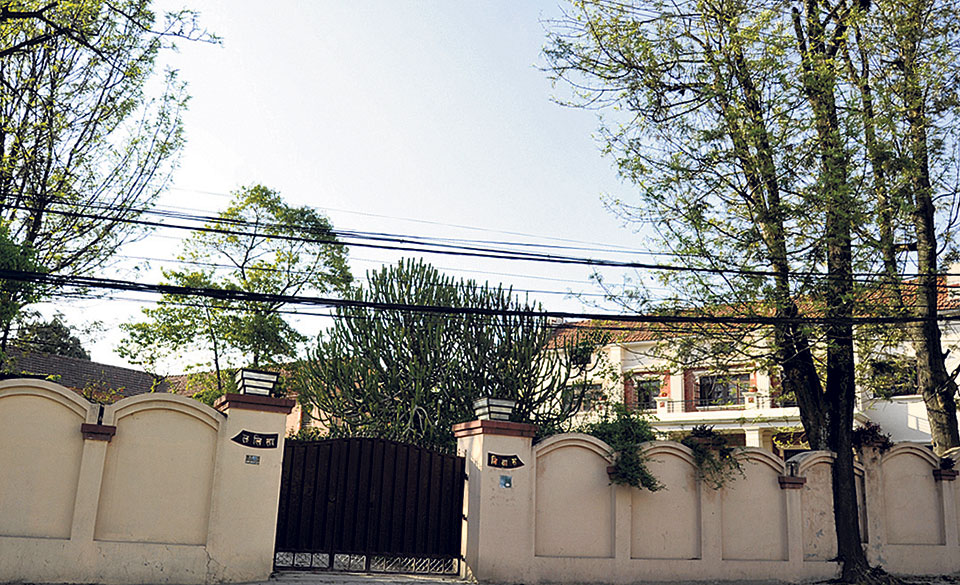 KATHMANDU, Feb 1: The Central Investigation Bureau (CIB) of Nepal Police submitted an investigation report on the Lalita Niwas land scam to the government on Friday, recommending action against bureaucrats and middlemen but exonerating the political leadership, said a highly-placed source.

The report has recommended charging some 40 individuals involved in the scam with forgery, fraud and doctoring of official documents.

About 114 ropani [5.8 hectares] of public land at Lalita Niwas, which adjoins the prime minister’s official residence at Baluwatar, was captured by various individuals over a period of several years.

Although the police have not made public the report submitted to the Ministry of Home Affairs, sources at the CIB said the involvement of the then officials at the land revenue office and middlemen involved in transferring the ownership of the land to private parties are fingered in the report.

“CIB has submitted an investigation report to the Home Ministry today [Friday]. The contents of the report cannot be made public until we file a case in court against those accused in the scam,” CIB spokesperson Bel Bahadur Pandey said on Friday.

Not surprisingly, action has been recommended against none of the politicians implicated in the scam. A government probe committee led by Sharada Prasad Trital had stated in its own report that successive governments headed by Krishna Prasad Bhattarai, Girija Prasad Koirala, Surya Bahadur Thapa, Madhav  Nepal and Baburam Bhattarai had taken policy decisions favoring the land mafia. But the CIB’s investigation report has not recommended action against any politicians, said the source.

Former chief of the Commission for the Investigation of Abuse of Authority Deep Basnyat, former election commissioner Sudhir Kumar Shah and former minister Chhabiraj Panta are among key individuals recommended by the CIB for action. Former land revenue secretary Panta was appointed a minister in the transitional government after the dissolution of the first Constituent Assembly in 2013.

Middlemen Shobhakanta Dhakal and Ram Kumar Subedi, who were the masterminds behind the land scam, have also been recommended for action.

CIB has also named Bhatbhateni Supermarket proprietor Min Bahadur Gurung for his involvement in the scam. According to the report, Gurung, Dhakal and Subedi had transferred all 114 ropani to their own names by setting up fictitious owners and then sold the land to various individuals. Nepal Communist Party General Secretary Bishnu Paudel, who is a former finance minister, was also found to have bought a piece of the land from a middleman, along with as many as 100 other individuals.

The report has recommended action against Rukma Shumsher Rana, Hemadri Rana and others who claimed ownership of the land, using false documents. The land was acquired by the government in 1962 with due compensation, but the Rana family claimed that it was confiscated from them.

Kaladhar Deuba, Hupendra Mani KC, Urmila Shah, Gehanath Bhandari, Tikaram Ghimire and Dineshhari Adhikari are a few other individuals recommended for action for their involvement in the scam, said the source.