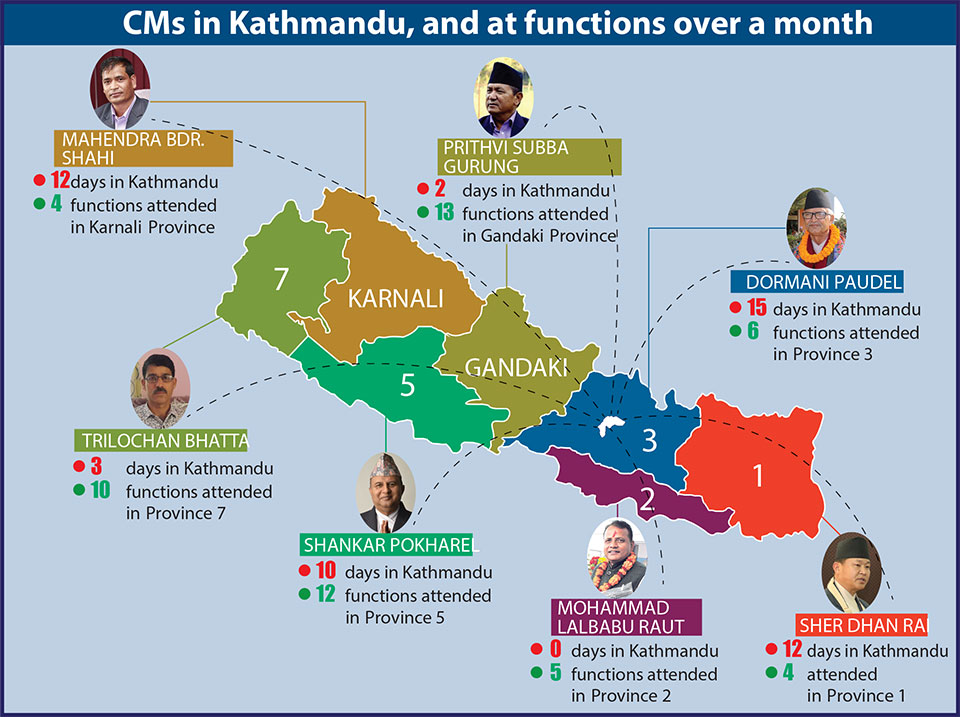 KATHMANDU, July 26: Most of the chief ministers of the provinces do not seem to be taking their jobs seriously. Instead of busying themselves with measures for implementing federalism and executing development work in their provinces, they have been found preoccupied either attending petty funtions or visiting Kathmandu, the federal capital.

A compilation of the records of the daily schedules of all the chief ministers for the last one month by Republica shows that they have kept themselves busy attending various functions and visiting the federal capital, sidelining major administrative and development work such as finalizing the choice of provincial capitals and settling on their names, endorsing necessary laws and setting up the offices required for the full functioning of the provincial governments.

Chief Minister of Province 3 Dormani Poudel went outside Hetauda, the provisional provincial capital, 15 times over the duration of one month, visiting different cities including the federal capital, under various pretexts.

Records of his day-to-day schedules show that he has frequented Kathmandu eight times, spending around 15 days here in all. He has visited the federal capital more than any other chief minister.

“He went to Kathmandu on personal business as well as for participating in various programs organized by various organizations,” said his personal secretary Anup Poudel.

Apart from Kathmandu, Poudel has visited Chitwan three times, Nuwakot twice, and Dhading and Kavre once each. While in Hetauda, he is busy attending formal functions. In the last one month, he participated in six such functions.

After Poudel, Chief Minister of Province 5 Shankar Pokharel has spent the most time visiting the federal capital and attending functions. Records show that he arrived in Kathmandu on June 29 and stayed till July 9.

His secretariat informs that he spent the 10 days in the capital holding talks with federal ministers, including Prime Minister KP Sharma Oli, to seek a go-ahead in principal from the federal government for managing lands, manpower and infrastructure required for the functioning of various provincial bodies.

Similarly, Poudel kept himself busy attending different functions. In the last one month, he participated in altogether 12 formal functions in the province. He attended seven funtions in Butwal, the temporary provincial capital, three in Dang and two in Rupandehi. In the last four months, he participated in over 40 formal functions, according to his personal secretariat. The secretariat claims that attending of functions has not hampered the daily business of the provincial government.

Similarly, Chief Minister of Karnali Province Mahendra Bahadur Sahi spent most of his time last month in Kathmandu. During the month, he visited the federal capital twice, spending altogether 12 days. He had come to Kathmandu on July 5 and stayed till July 13, spending eight days. During his stay, he held talks with federal ministers including Home Minister Ram Bahadur Thapa and Finance Minister Yuba Raj Khatiwada, urging them to allocate a budget for expanding the Kohalpur-Surkhet road to four lanes. Similarly, he also met industrialists, businessmen and representatives of diplomatic missions to urge them to invest in his province. The last time he came Kathmandu was when the federal government sent a team to airlift Dr Govinda KC from Jumla.

He participated in four formal functions in the province in the last one month.

Chief Minister of Province 7 Trilochan Bhatta visited Kathmandu once in the last month, spending three days here. He arrived on June 17 and participated the next day in the first meeting of the National Council of Disaster Mitigation and Management summoned by Prime Minister Oli. On June 19, he met federal ministers and leaders of his party .

Similarly, he participated in 10 different functions organized by various organizations in the province.

Likewise, Chief Minister of Province 4 Prithvi Subba Gurung came to Kathmandu once during the month, spending two days here. He participated in 13 formal functions in the province.

The chief minister of Province 2 Mohammad Lalbabu Raut has not visited Kathmandu in the last one month. He has participated in more than five formal functions in the province.

Gagan Thapa busy in poll campaign in Kathmandu-4 (With photos)

Only essential services to remain open from today
26 minutes ago