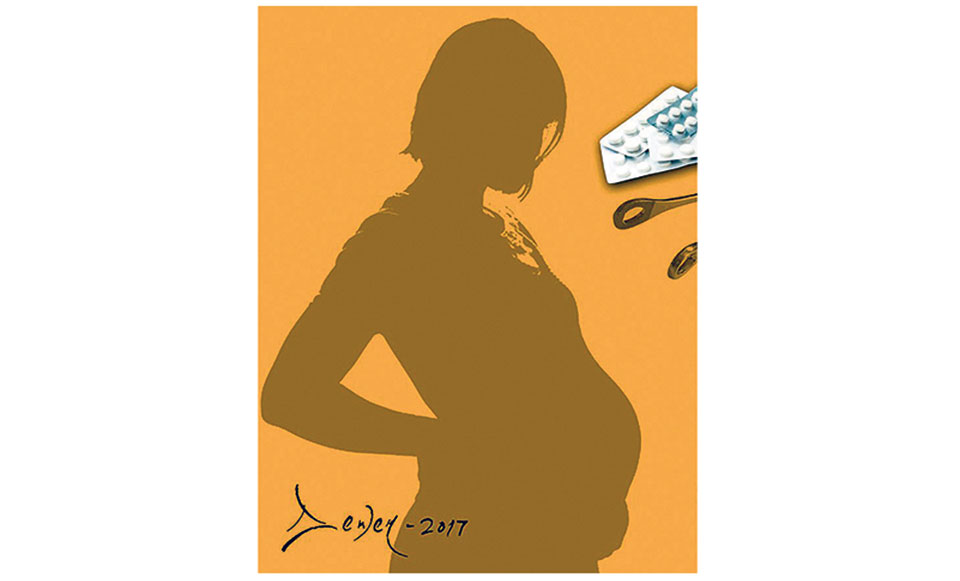 Chief of the District Hospital Bajura, Dr Rupchandra Bishwokarma, finds the scenario encouraging. In the past, women would commonly use unsafe ways to end unwanted pregnancy, but as the safer facilities have been made accessible they have started seeking medical help for abortion, he noted.

“During the last one and a half year, 875 women had safe abortion in different health centers in the district. This is remarkable,” he said. “This is a testimony to increase in women’s accessibility to health centers and their growing level of awareness,” he added.

Dr Bishwokarma stated that the district hospital has ensured that safe motherhood and abortion service is provided at the grassroots levels. For that, local units have been alerted and local health centers are mobilized. “The service is being extended to all local levels, the practice of unsafe abortion has to be curbed,” he said.

Women and girls who used to go to private clinics for abortion have also been found to have opted for government health centers, according to Bishwokarma. “And this is happening because abortion service is cheap as well as safe in health centers operated by the government,” he claimed.

Even though the constitution does not bar women from enjoying the rights of delivering baby or being a mother without getting married, the Nepali society is not comfortable with the concept.

Women and girls are under even stricter scrutiny in rural zones. The patriarchal social structure leaves them with little power to follow their choices. Amid this, a lot of women, who happen to conceive before marriage, seek abortion service. When such services are not within their reach, they try risky ways to terminate pregnancy.

According to Dr Bishwokarma, girls and women in villages still try traditional methods, most of which are extremely unsafe, to end their pregnancy. “But such practices are now becoming rare. Both awareness and empowerment is needed to make women understand and enjoy their rights,” he remarked.

Earlier, only clinical abortion services were available for women. These days, fresh pregnancies can be terminated with the help of medicines. Even in rural areas, such medicines are available, according to Dr Bishwokarma.

“It is however very risky to have such medicines without the supervision of health personals. So, just providing drug is not the solution, there needs to be skilled human resource to handle this,” he stressed.

Until two years ago, only the district hospital and a few primary health posts in the district used to offer abortion service. Later, the service was gradually extended at the local levels. “This has made it easy basically for women from poor backgrounds. They are the ones who cannot go to expensive hospitals for seeking service,” Dr Bishwokarma said.

While minor cases are dealt by health centers, complex cases are referred to the district hospital. “Due to the lack of equipments and sometimes also due to human resource crunch, they send pregnant women to district hospital in case of complications,” said Dr Bishwokarma.

Meanwhile, Hansi Devi Ayadi of Triveni Municipality expressed happiness over ‘unexpectedly low expenses’ for her abortion. “I am so happy that I could fix things so easily. Earlier, I had to spend a lot of time and money. Even my health deteriorated due to excess bleeding,” she said.

She had gone to Martadi town last time to seek abortion. Even after spending hefty amount, she was not satisfied with the service provided by the private clinic she consulted. Recently, her abortion was handled by a skilled doctor at Kailashmandu Health Post and the service was for free.

Another woman, Ramita Nepali of the same municipality has similar experience. Abortion service at local health post is a boon for women she said. “Even after having required number of children women still get pregnant as family planning is not so common. Then they seek abortion service,” she said. “But when such services are not easily available, women feel tortured,” she added.

BAJURA, July 20: Most of the settlements in Bajura district are at high risk of landslides and flooding due to... Read More...

Body of missing Sherpa found in Manaslu
23 hours ago

About 20,000 observers to be deployed to monitor upcoming elections
22 hours ago

Dhulikhel Municipality submits report on SDGs to UN
40 minutes ago