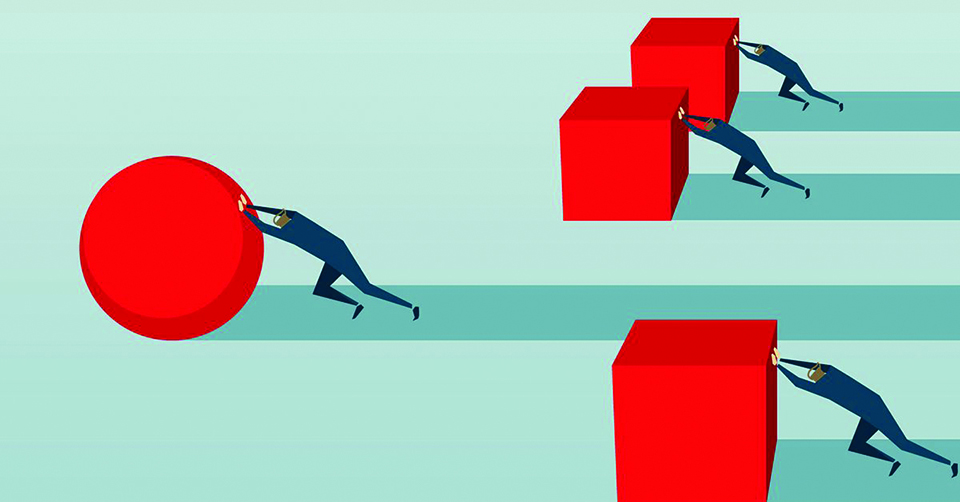 What’s now holding up economic progress? Why do we not yet have a real prospect for improved livelihoods?

Nepal’s private sector businesses have lost their convening power, leadership authority and credibility. Unless they rapidly change course, the state is likely to become a more dominant force in commercial activities, eroding the space for private enterprises. Nepali business leaders must do more to push back against the state and establish private enterprises as a pathway for economic prosperity for all.

Two cases tell the story. First, the case of Pradeep Jung Pandey. In April 2015, Pandey was elected President of Federation of Nepalese Chambers of Commerce and Industry (FNCCI) in a bitter campaign. FNCCI is Nepal’s leading business association with representation across all districts and from 100 sectors.

Shortly after winning the election, Pandey was charged on a corruption case from three decades ago. It was clear that the charge, trial and conviction was a continuation of the bitter FNCCI elections. In a carefully forged compromise that followed the conviction, Pandey was quickly pardoned by the President of Nepal and he resigned from the post of FNCCI President. He has since retreated from public view.

Yet no one in the business community publicly objected. FNCCI as an institution stood by and watched silently. The display of impunity with which different interests pursued the case was blatantly arrogant. It was as if the tallest business leaders were showing the middle finger to the face of Nepal with complete disregard.

The case of Pradeep Jung Pandey further eroded the moral authority of businesses to lead. It reinforced public perception that you couldn’t count on the private sector to act in national interest—they would act in narrow self-interest. Two years hence, the early signs of the fallout became visible.

Durbar Marg is an upscale commercial street in central Kathmandu. In September 2017, the Minister of Supplies at the time, Shiv Kumar Mandal, arrived in Durbar Marg flanked by a posse of reporters and officials from Department of Supply Management and Protection of Consumers. They raided four premium outlets—Nike, Puma, Bentley and Store One and reportedly found that the stores were charging up to 11 times the cost.

The four stores were sealed. In the weeks that followed, many more shops were raided. Their owners taken to jail and asked to provide evidence that they were not generating excessive profits. There was little legal basis for the anti-profiteering drive. But the minister sanctioned, administered and personally oversaw the drive. Media reported the unfolding action with glee.

Durbar Marg Development Board (DMDB), an association representing the interests of shopkeepers and business owners in Durbar Marg, called for an indefinite shutdown. Shops in Durbar Marg closed but the indefinite shutdown lasted only four days.
As the stores opened, DMDB’s president issued a statement: “We have decided to open the market as people have been facing inconvenience on the eve of festivals like Dashain and Tihar.”

No interest group in Nepal has ever withdrawn a strike or protest in view of inconveniences to the public—if inconvenience were a concern, why have the shutdown in the first place? DMDB’s president was bluffing.

The reality was that the protest had failed to resonate. In social media and commentaries, the public remained largely sympathetic and supportive of the raids.

The raids in Durbar Marg (and later New Road) were never intended to have any meaningful economic impact. It was not going to enhance market competition or enforce consumer protection. Shops in Durbar Marg cater to Nepal’s super elite, those with sufficient disposable income who don’t care about being charged 11 times the cost as long as they get what they want.

Even if Durbar Marg shops had remained shut for months in protest, it wouldn’t have had an impact on the economy or altered the state of market competitiveness by a whisker—that’s how meaningless it was.

The raids in Durbar Marg and New Road were largely symbolic. That is exactly where the trouble begins.

The failure to generate public opposition against the anti-profiteering drive reflects the largely held public perception of businesses and private sector as cheats and exploitative. Such perceptions do not apply uniformly to all private enterprises. Small and medium enterprises—the roadside tea shop, the convenience store in the street corner—are held in high esteem as honorable and rendering important services. But large businesses face a perception problem.

Perhaps the anti-profiteering drive in Durbar Marg was no more than a minister trying to establish five minutes of fame. Perhaps it was a mild veiled form of state-sponsored extortion. Whatever the reasons, the case shouldn’t be taken lightly. The perceptions of the private sector and larger businesses as cheats and exploitative describe a deeper growing resentment against the rich, inequality and the concentration of wealth.

It is easy to cast aside the recent communist convergence merely as a political convenience for winning an election. Whatever the political machinations, the undercurrents shouldn’t be understated.

The ground has shifted. The Maoists insurgency has taken down the monarchy, dismantled the state and produced a new federal constitution. But it has not yet yielded meaningful changes on the ground. Prospects for improved livelihood or political actualization remain dim. Hopes are fading. Frustration is mounting. The accumulated unmet expectations and frustrations are now beginning to bubble to the top.

The old targets have been taken down. Monarchy is gone. Religion is gone. What’s now holding up economic progress? Why do we not yet have a real prospect for improved livelihoods?

The concentration of wealth. The persistent inequality. The display of greed. These are now the new targets and large businesses embody these in full measure.
The applause that met the minister as he ordered shops in Durbar Marg to be raided and sealed for profiteering is how an economic revolution might sound in the early days. That applause doesn’t bode well for the future.

Business leaders must not remain deaf to that applause. There must be rapid introspection, an assessment of where they fit in and the role they need to play to address the pent-up demand and accumulated frustrations.

But first, businesses need to recognize that they have squandered considerable moral authority and eroded confidence. They need to engage more positively, bringing coalitions, partnership and a broader sense of shared commitments.

One area is in infrastructure. Large businesses must do more in this area. They must build broader coalitions, partner more effectively with government, shift from competition to collaboration and demonstrate a higher degree of confidence in the country from which they profit.

Shops in flood-hit Rautahat back in business

RAUTAHAT, August 27: Trade and business activities in Rautahat district, which were severely hit by the devastating floods, are coming back... Read More...

KATHMANDU, Jan 26: Leaders of information and communication technology (ICT) business have said that there is a need to effectively implement... Read More...