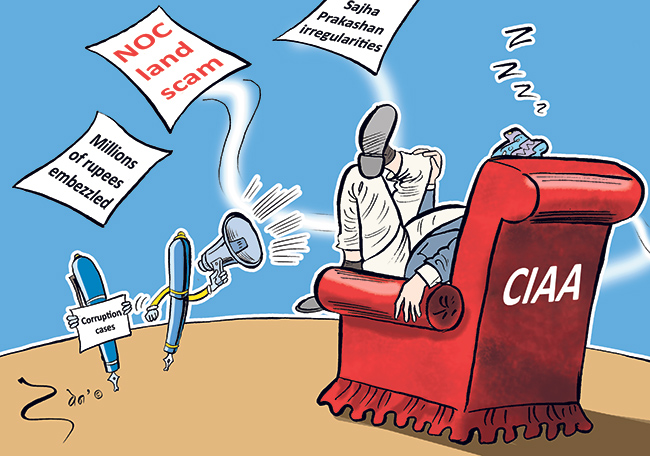 On February 11, Commission for Investigation of the Abuse of Authority (CIAA) celebrated its 27th anniversary. CIAA during the Panchayat days was called Commission for Prevention of Abuse of Authority (CPAA). Unlike present-day CIAA which has a limited power to investigate and prosecute corruption crimes, CPAA had a sweeping power to adjudicate corruption crimes. The agency remained or was made to remain defunct in the latter years.

Historically, CIAA must be one of the oldest anticorruption agencies in Asia. It is pathetic to see this body remaining docile and dormant, dragged into political controversy, and now probably on the verge of collapse at a time when corruption has become a “high growth” industry.

Nepal’s anti-corruption drive is in doldrums, a state of total chaos. This could be evidenced by the remarks of current prime minister K P Oli who, few days ago, had signalled possible legitimization of black money, Apex Court issuing an interim order freeing billions of rupees held by the Central Bank on the ground of suspicious money laundering transactions and a political wing of a Maoist party taking anti-corruption law into their hands by trying to ransack home of a tax officer indicted of corruption charges. Meanwhile, erstwhile premier Sher Bahadur Deuba distributed largesse to his cadres and party supporters.

In the name of left alliance, the sharing of spoils is now back as political agenda. It is not just the publication of Nepal’s ranking on global corruption perception index, scheduled on 21 February, which is expected to signal state of corruption and anti-corruption in Nepal, probably, within a week. The appointment of new Chief Commissioner will also determine the fate of the agency.

In its latest report, CIAA has published number of statistics related to its performance. Among several performance yardsticks that are worth noting is simple data on total number of corruption complaints lodged by the public with the agency and the complaints resolved or settled by the agency. This information is even more significant in our situation where public agencies are reactive, rather than proactive, to public complaints.  We need to look into the number and quality of public complaints because it indicates a degree of people’s trust towards the agency.

Keeping aside quality and reliability of complaints, 75 percent of them are lodged anonymously or under fake names, usually guided by personal vendetta. The widening gap between complaints lodged and resolved indicates a degree of CIAA inefficiency or backlog of corruption complaints. The chart in this article depicts the trend in the total number of corruption complaints lodged at and resolved by CIAA for the last 27 years of its existence. The data reveals an interesting pattern.

Going by the published data, one can observe five distinct phases in CIAA. The first phase (1990/91-2001/2) could be termed as a dormant stage where the agency remained, more or less, docile and defunct. If there is anything noteworthy during this stage it has to be with a slight increase in corruption complaints in 1996/97 triggered, primarily, by Supreme Court verdict re-establishing CIAA as an authoritative anticorruption agency. The case has to do with disputed jurisdiction between the agency and Special Police within Ministry of Home Affairs.

The second phase (2002/3-2006/7) coincided with the arrival of new leadership under Surya Nath Upadhayay and drafting of the new anti-corruption law giving substantial power to CIAA. The high profile actions of CIAA are the distinct features. During this phase, one can observe an abrupt rise as well as fall in corruption complaints. The fall is primarily due to the arrival of an extra-constitutional agency called Royal Commission on Controlling Corruption (RCCC) during the period of “royal regression”.

Currently, the agency is in the state of decline and decay. Obviously, this has to do with LMSK debacle plus clipping one of the wings of the CIAA to investigate “improper conduct” by the new constitution. Personally, LMSK may be a controversial figure but one cannot ignore or discount the hard facts revealed by corruption complaints data in the chart.

It will be a herculean task for new leadership to revert declining trend to an original position. It is not just the decline in corruption complaints but also widening the gap between complaints lodged and resolved by CIAA that should be worrying to the public.
From the data presented in the chart, one can fairly predict the shape of things to come for CIAA. By the way, MPs in Province One have declared their Province “corruption free zone.” I hope they are not joking.

Infographics: HIV infections are on decline

Non-performing loans of banks decline despite surge in lending rates