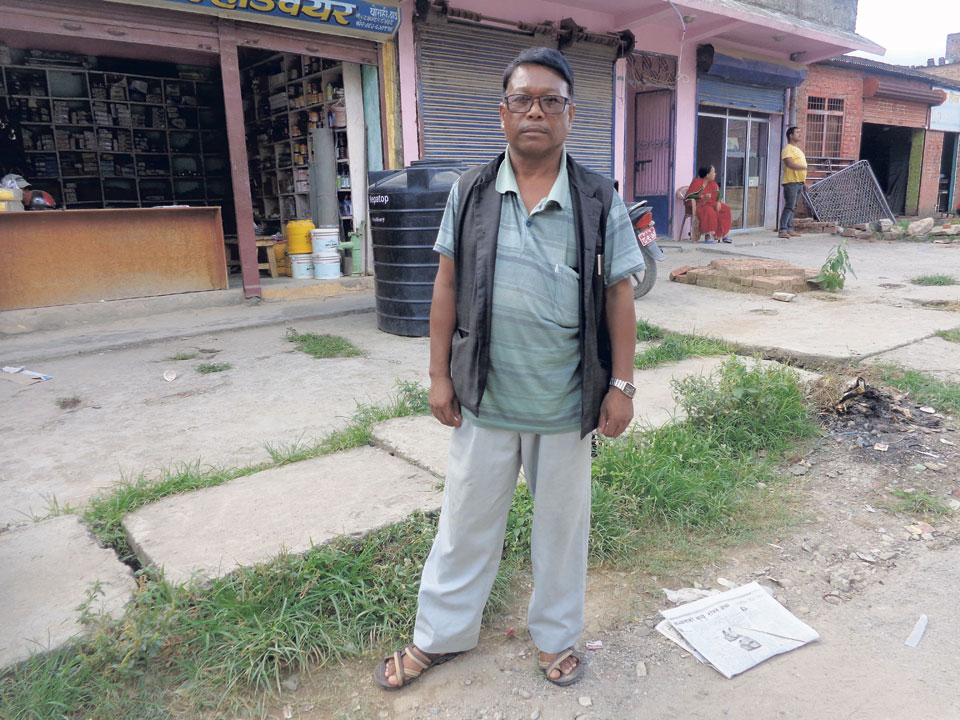 DANG, July 18: An interesting thing happened at the Ghorahi Sub-metropolitan City’s office on Monday and locals present at the scene were delighted to witness it. A member from the Kusunda community was taking oath of office along with other members of the newly sub-metropolis’s executive team. Dhan Bahadur Kusunda was the center of attraction.

“We have always been marginalized and are members of a nearly extinct community,” said Dhan Bahadur. “But luckily, I have become an important person in this sub-metropolis. I am still confused whether it is a reality or a dream,” he grinned.

He actually looked more shocked than he was able to express. He was restless and looking here and there. Talking to Republica, he said that he will be very honest to the public and no matter what he will try his best to deliver the promises he made to them.

He said that people have been telling him of the importance he has gained now in becoming of the decision making body of the local authority. Dhan Bahadur said that “he never imagined that this day would come, even in my wildest dream. Forget being a part of the local government.”

He feels nervous when people tell him that he has now become a parliamentarian of the local government. “I have little knowledge of how government functions. But I am here and it feels awkward to be in an unknown territory. But I will do the best I can,” he said.

Dhan Bahadur, a ward chair person, was one among the eight member team of the municipal executive committee formed by the sub-metropolis. He was picked for the post under the marginalized community category quota.

He shared that because of his upbringing as a member of a marginalized community he always felt that he is not as smart as the people of other communities, but claimed that he has always been a leader for his people. Through out his life, he said, he has met several leaders to plead for the betterment of his community.

“Member of our community are not educated and therefore don’t have access to state resources. I have met many leaders to share our problems and request them for assisting our community,” he said.

The first and only representative of the Kusunda community, who are nomads, now feel that he can address the woes of his people. “This is historical. I am the first and the only person from our community who has reached to this level. So, this is a great matter of pride for all of us,” he said.

“I am confident that I will do something for our community. As we don’t own land, we don’t have land ownership paper. This lack has deprived us of many state facilities. I will try to address this issue,” he added.

Kusundas do not worry that much about not having permanent address. But when they realized that lack of land ownership paper is depriving them of several kinds of government facilities, they have been requesting government for availing it.

“As a member of the community I know the problems we are facing. Even though few in numbers, we are very poor and do not have enough to eat,” he said adding that during his tenure he will try to have an integrated settlement built for the community.

He has been working on the concept of integrated settlement of Kusundas for a long time. He shared this plan in each of his meetings with the leaders or CDO or LDO, or any bureaucrats. “But that was never in their priority. They would give assurances, and forget about it,” he said.

As per the government data, there are only 273 Kusunda across the country. There are 15 families of Kusuanda in Dang district. Others are scattered in parts of Arghakhachi, Kapilbastu, Gorkha, Tanahu, Pyuthan and Surkhet district. Members of this community, who are on the verge of extinction fear that their culture and language would die before them.

“We are scattered here and there. Government says we number over 200 and are living in different districts. But still, government has not done enough to protect our community,” Dhan Bahadur said. “My duty now is to develop an integrated settlement for all of us,” he stressed.

He said that their mother tongue, the Kusunda language, is already near extinction. “Only two members of our community can speak our language. It is a clear sign that our culture, language, art, tradition is on the verge of extinction. We need to conserve it,” he said. “May be joining the local government will turn out to be a great opportunity for doing that,” he added.

Dhan Bahadur is the founder of the Nepal Kusunda Development Society, an organization dedicated to the conservation and welfare of the Kusunda people. It was through this organization, he got into politics. “I came in contact with leaders, parties to share our concerns. During these days, I also came in touch with representatives of the federation of indigenous groups also and became part of it,” he added.

Just like Rautes, Kusundas’ lifestyle some years back fully depended on jungles. But with the formation of community forests and deforestation, their traditional lifestyle and means of livelihood were challenged. This forced most of them to settle down.

Preserving and protecting the past is essential in order to ensure that today’s dangerous zealots do not succeed ... Read More...