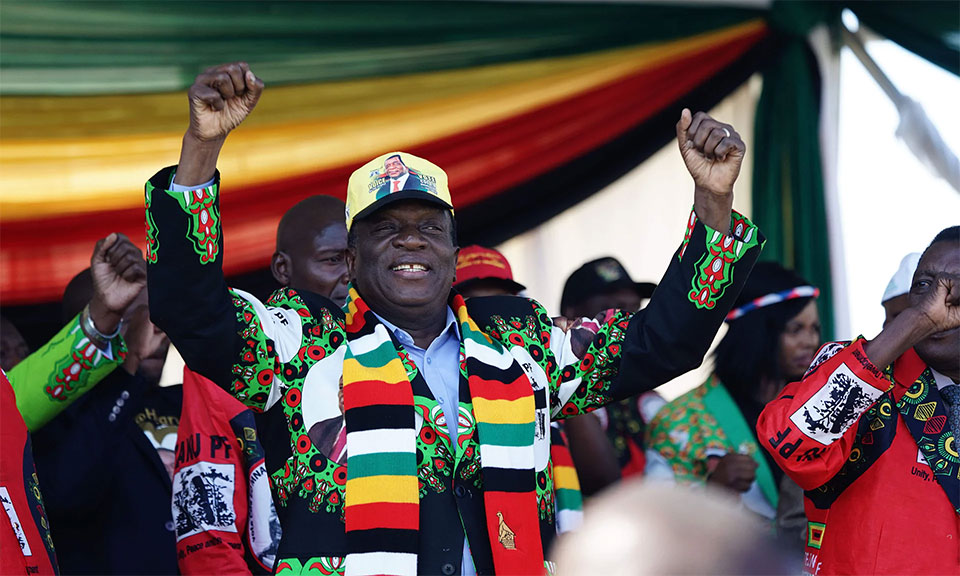 President Emmerson Mnangagwa was not injured in the blast which occurred when he had finished his address. Photograph: Zinyange Auntony/AFP/Getty Images

Several ministers and others hurt in apparent assassination attempt

June 24: Emmerson Mnangagwa, the president of Zimbabwe, called for peace, love and unity in the small southern African state last night, hours after escaping an apparent assassination attempt during an election campaign rally in the southern city of Bulawayo.

At least eight people were injured in the attack at around 2pm,​ the state-runHerald newspaper reported. Footage posted online showed Mnangagwa, 75, waving to the crowd in the White City stadium, turning to step off the podium and walking into the open-sided VIP tent where seconds later the explosion occurred. People ducked and screamed as smoke billowed. State television immediately cut its broadcast.

Images taken by photographers who were at the rally showed several injured people lying on the ground. Local media said the vice-president, Kembo Mohadi, had sustained leg injuries while Constantino Chiwenga, a second vice-president and the former military commander-in-chief, had bruises on his face.

In a statement issued later in the afternoon, Mnangagwa said his thoughts and prayers were with “all those affected by this senseless act of violence”.

The forthcoming election in Zimbabweis the latest turning point in what has proved the most tumultuous few months in almost four decades of Zimbabwe’s political history. In November, Robert Mugabe was forced out of power after 37 years, following a peaceful military takeover supported by the vast majority of the 17 million population.

The poll on 30 July pits the ruling Zanu-PF against the Movement for Democratic Change (MDC), the longstanding opposition. Zanu-PF is led by Mnangagwa, a former vice-president known as “the Crocodile”, who took power when Mugabe was ousted.

Polls indicate a close race, but one that Zanu-PF should win. So fart he hard-fough campaign has seen little of the violence associated with previous elections in Zimbabwe.

Past votes have been marked by systematic intimidation of the opposition and fraud, and the US and others have said a credible vote is key to lifting international sanctions.

There is no indication of who might be responsible for ​Saturday’s attack. There have been frequent allegations of assassination attempts directed at Mnangagwa and other senior politicians, though none of these have involved bombings or firearms.

“Investigations are under way and more details will be given to the public. There have been multiple attempts on the president’s life over the past five years,” said George Charamba, the president’s spokesman.

The consequences of the attack are unclear but could impact on the ability of the opposition to campaign. One opposition official, who did not want to be named, said he feared a “major crackdown” following the bombing.

Why We should All be Feminists
38 minutes ago