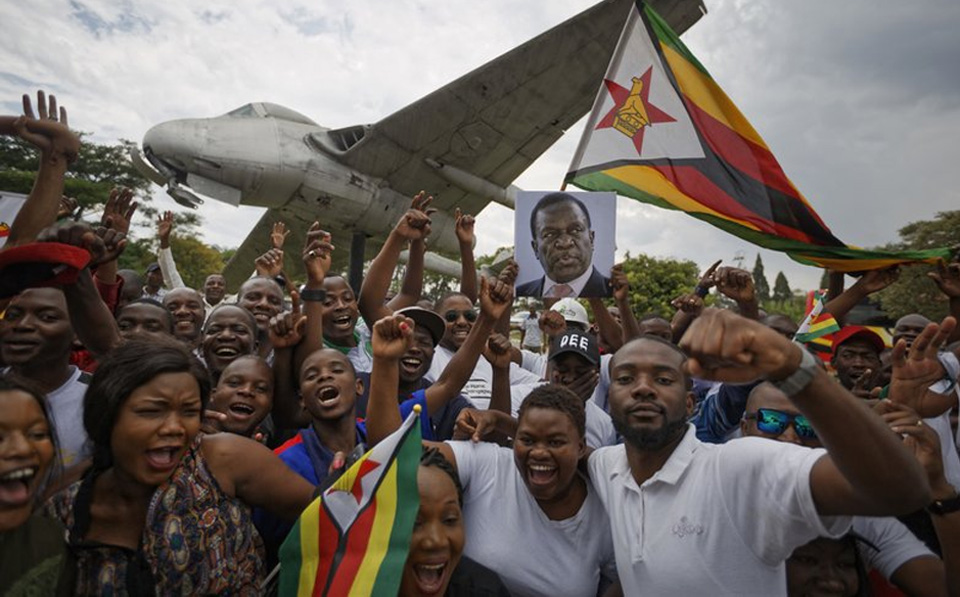 Supporters of Emmerson Mnangagwa, the man expected to become Zimbabwe’s new president, hold a photograph of him and cheer as they arrive to show their support at Manyame Air Force base (AP Photo)

ZIMBABWE, Nov 22: Zimbabwe’s recently fired vice president was set to return on Wednesday to be sworn in as the country’s new leader after Robert Mugabe announced his stunning resignation during impeachment proceedings against him.

The state-run broadcaster reported that Emmerson Mnangagwa would arrive at Manyame Air Base in the capital, Harare, at 6 p.m., and the Parliament speaker said he would be sworn in Friday after the ruling party notified him of its nomination of Mnangagwa to replace Mugabe until the end of the term next year.

Singing and cheering, several hundred people have gathered outside the air force base in anticipation of Mnangagwa’s arrival.

Some carried printed signs with images of Mnangagwa, suggesting a significant level of organization behind the jubilant turnout. Signs read “Welcome back, our hero” and “True to your word, you’re back. Welcome.”

A man in the crowd, Godwin Nyarugwa, said he was “very ecstatic” and that “we need a change in this country, change in everything.”

Zimbabwe has been through “crisis after crisis” and Mnangagwa seems best suited to lead the country forward, said Nyarugwa, who has several university degrees but no job.

“We have to try him and see,” he said. “If he doesn’t come up with something, we need to change him as well.”

The air force base where demonstrators are congregating is adjacent to Harare’s international airport.

Zimbabweans are still reeling from Mugabe’s resignation Tuesday. They cheered and danced in the streets of Harare late into the night, thrilled to be rid of a leader whose early promise after the end of white minority rule in 1980 was overtaken by economic collapse, government dysfunction, and human rights violations.

Now the focus turns to Mnangagwa, Mugabe’s longtime deputy who has pushed aside earlier this month as unpopular first lady Grace Mugabe positioned herself to replace him and succeed her husband. Mnangagwa fled the country, claiming threats against his life.

That led the military to step in a week ago, opening the door for the ruling party and the people to publicly turn against the president.

It was not clear what the 93-year-old Robert Mugabe and his wife would do next. Mugabe, who was the world’s oldest head of state, said in his resignation letter that legal procedures should be followed to install a new president “no later than tomorrow.”

HARARE, Aug 27: Emmerson Mnangagwa was officially sworn in as president of Zimbabwe on Sunday after winning a bitterly contested... Read More...