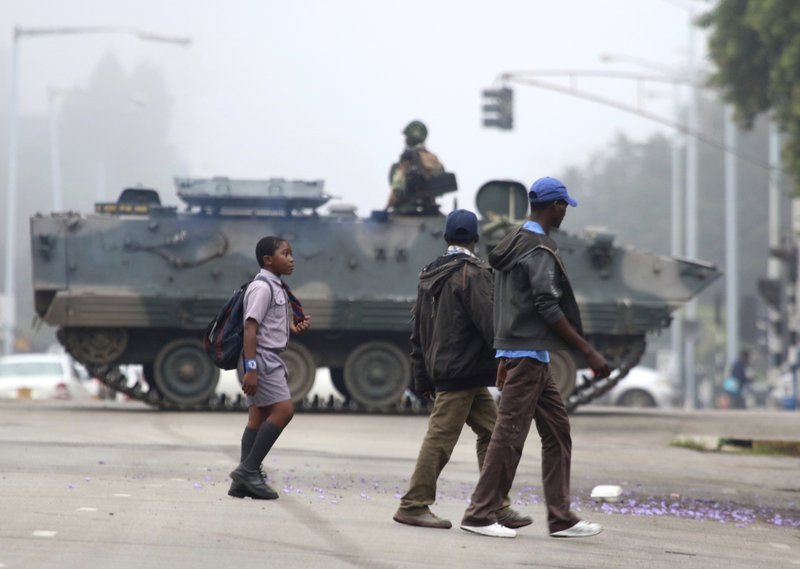 HARARE, Nov 15: Zimbabwe’s army said Wednesday it has President Robert Mugabe and his wife in custody and is securing government offices and patrolling the capital’s streets following a night of unrest that included a military takeover of the state broadcaster.

The night’s action triggered speculation of a coup, but the military’s supporters praised it as a “bloodless correction.”

For the first time, this southern African nation is seeing the military oppose Mugabe, the world’s oldest head of state and one of the longest-serving authoritarian rulers. Mugabe has been in power since Zimbabwe’s independence from white minority rule in 1980.

Armed soldiers in armored personnel carriers stationed themselves at key points in Harare, while Zimbabweans formed long lines at banks in order to draw the limited cash available, a routine chore in the country’s ongoing financial crisis. People looked at their phones to read about the army takeover and others went to work or to shops.

In an address to the nation after taking control of the Zimbabwe Broadcasting Corporation, Major General Sibusiso Moyo said early Wednesday the military is targeting “criminals” around Mugabe, and sought to reassure the country that order will be restored.

It was not clear where Mugabe, 93, and his wife were Wednesday but it seems they are in the custody of the military. “Their security is guaranteed,” Moyo said.

“We wish to make it abundantly clear that this is not a military takeover,” he said. “We are only targeting criminals around (Mugabe) who are committing crimes that are causing social and economic suffering in the country in order to bring them to justice.”

Moyo added, “as soon as we have accomplished our mission, we expect that the situation will return to normalcy.” The army spokesman called on churches to pray for the nation. He urged other security forces to “cooperate for the good of our country,” warning that “any provocation will be met with an appropriate response.”

All troops were ordered to return to barracks immediately, with all leave canceled, said Moyo. The broadcast was sent out from the ZBC headquarters in Pocket’s Hill near Harare’s Borrowdale suburb.

Overnight, at least three explosions were heard in the capital, Harare, and military vehicles were seen in the streets.

The military actions appear to put the army in control of the country. Army commander Constantino Chiwenga had threatened on Monday to “step in” to calm political tensions. Mugabe’s ruling ZANU-PF party responded by accusing the general of “treasonable conduct.” But now Chiwenga appears to be in control.

The army has been praised by the nation’s war veterans for carrying out “a bloodless correction of gross abuse of power.” The military will return Zimbabwe to “genuine democracy” and make the country a “modern model nation,” said Chris Mutsvangwa, chairman of the war veterans’ association, told The Associated Press in Johannesburg.

Mutsvangwa and the war veterans are staunch allies of Emmerson Mnangagwa, who was fired from his post of vice president by Mugabe last week. Mnangagwa fled Zimbabwe last week but said he would return to lead the country.

The U.S. Embassy closed to the public Wednesday and encouraged citizens to shelter in place, citing “the ongoing political uncertainty through the night.” The British Embassy issued a similar warning, citing “reports of unusual military activity.”

For the first time, this southern African nation is seeing an open rift between the military and Mugabe, the world’s oldest head of state who has ruled since independence from white minority rule in 1980. The military has been a key pillar of his power.

Medical supplies including oxygen cylinders and ventilators ready to be delivered to Nepal: China
14 hours ago