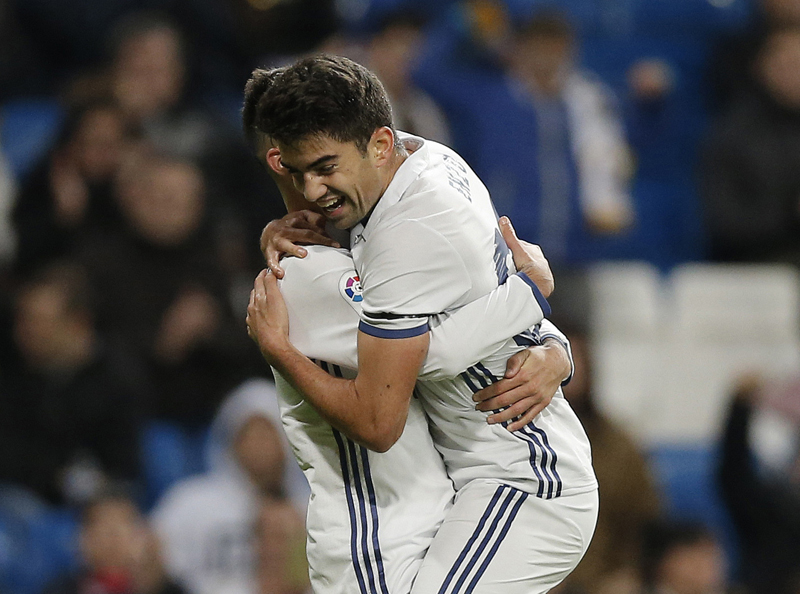 MADRID, Dec 1: Enzo Zidane made his dad proud on Wednesday, scoring a goal on his competitive debut for Real Madrid in the Copa del Rey.

Zinedine Zidane, the coach, gave his 21-year-old son a chance and he took full advantage, finding the net with a nice right-foot shot from the edge of the area to help Madrid rout third-division club Cultural Leonesa 6-1 and secure a spot in the round of 16.

"It's a dream to debut with Real Madrid and score a goal," Enzo Zidane said. "And I'm happy that it happened at the Bernabeu and with a victory."

The crowd at the Santiago Bernabeu Stadium loudly chanted Enzo's name after his goal. The youngster said the game jersey would go to his father for all his support through the years.

Using mostly second-string teams in both matches, Madrid advanced 13-2 on aggregate after a 7-1 win in the first leg.

Young forward Mariano Diaz also made the most of his time with the senior squad by scoring a hat trick at the Bernabeu, with one of the goals coming just 22 seconds into the match.

"This is a dream," Diaz said. "It's incredible to score one goal. To get three, it's indescribable, really. I'm very happy."

Madrid's other goals came from Colombia playmaker James Rodriguez, who got a rare chance in the starting lineup, and an own-goal by Cultural Leonesa defender Cesar Morgado.

It was the first time that former France great Zidane put one of his four sons to play with the first team in a competitive match. Enzo Zidane had already played during a pre-season tour.

The midfielder entered the game at halftime and scored his goal in the 63rd minute.

Another of Zidane's sons is a goalkeeper in the club's youth squads.

"I never expected to score a goal here at the Bernabeu, with all my family watching," Gonzalez said.

Zidane also used the game to give some playing time to defensive midfielder Casemiro and defender Pepe, who had been nursing injuries.

Also among the starters for Zidane was 17-year-old Norwegian midfielder Martin Odegaard.

Before the game, a minute's silence was held in honor of the victims of Monday's plane crash involving Brazilian club Chapecoense.

Madrid had its round-of-32 games played in advance to open up dates for its participation in FIFA's Club World Cup later in December.

It will play the Spanish league "clasico" against Barcelona on Saturday at Camp Nou.

Here's a look at other matches on Wednesday:

Barcelona will have some work to do in the second leg against third-division club Hercules after its second-string team failed to manage more than a draw.

Playing with several youngsters and some players who haven't been starting for the first team, Barcelona needed a 58th-minute goal by 18-year-old Carles Alena to cancel out David Mainz's strike for the hosts in the 52nd.

"We are going to try to advance," Mainz said. "We know it's going to be complicated, they may use some first-team players, but who knows?"

Hercules is 10 points behind Barcelona's "B'' team in its group in the third division.

Yannick Carrasco scored twice in the second half as Atletico comfortably won in the first leg of its round-of-32 matchup against third-division club Guijuelo.

Saul Niguez, Sime Vrsaljko, Angel Correa and Roberto also scored for Atletico to virtually secure a place for Diego Simeone's team in the next round.

Simeone used only a few regular starters in the match.

Sevilla cruised past fourth-division club Formentera 5-1, thanks to a first-half hat trick by youngster Joaquin Correa, while Villarreal won 3-0 at third-division team Toledo.

Second-division Cordoba beat top-flight club Malaga 2-0, while Granada edged Osasuna 1-0 in a game between two teams in the relegation zone of the first division. Celta Vigo defeated second-division side Murcia, 1-0.

All games other than Madrid's are first-leg encounters.