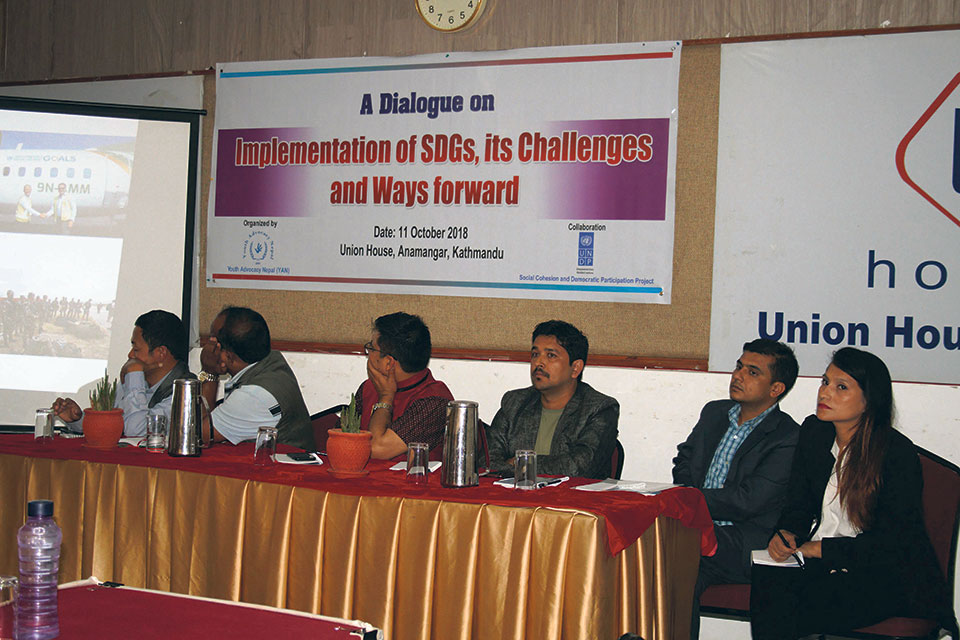 Speaking at a dialogue on ‘Implementation of SDGs, its Challenges and Ways Forward’ organized by Youth Advocacy Nepal in collaboration with United Nations Development Programme (UNDP) in the capital on Thursday, they said that youths can play important role in the implementation of the SDGs.

They also sought transparency and accountability from political parties and the government in the implementations of the programs and strategies to attain the global goals.

The SDGs—which have been adopted after the Millennium Development Goals (MDGs) that expired at in 2015—are 17 goals and 169 targets covering a broad range of sustainable development issues with a deadline to achieve them by 2030.

“The dishonest bureaucracy combined with inefficient political leadership of the country has stymied the development of the country,” said Madhav Dhungel, the executive vice chairperson of the National Youth Council. “Youths can be a partner of the government and other stakeholders in the journey to achieve the SDGs. There should be more investment on them,” he added.

Bhaskar Kafle, National Project Manager at the UNDP, said that those below the poverty line, marginalized and excluded groups should be prioritized while framing policies and programs to achieve the SDGs. He also said that the localization of SDGs was essential to meet those goals.

Though the National Planning Commission (NPC) has already come up with the national report on the SDGs, the country is yet to come up with comprehensive plans on the localization of SDGs at the sub-national levels that is critical for the attainment of the SDGs by 2030.

Similarly, Narendra Khatiwada, President of YAN, said that youths should not be left behind in the journey to meet SDGs. “Youths can play important role of watchdog as well as educators for the SDGs. The government as well as development partners should make sure that they take forward youth as partners and make investment on them,” he added.

Sujita death case: One arrested for ‘abetting’ suicide
6 hours ago

I will fulfill my promise to vaccinate every single citizen against COVID-19: PM Deuba
22 hours ago