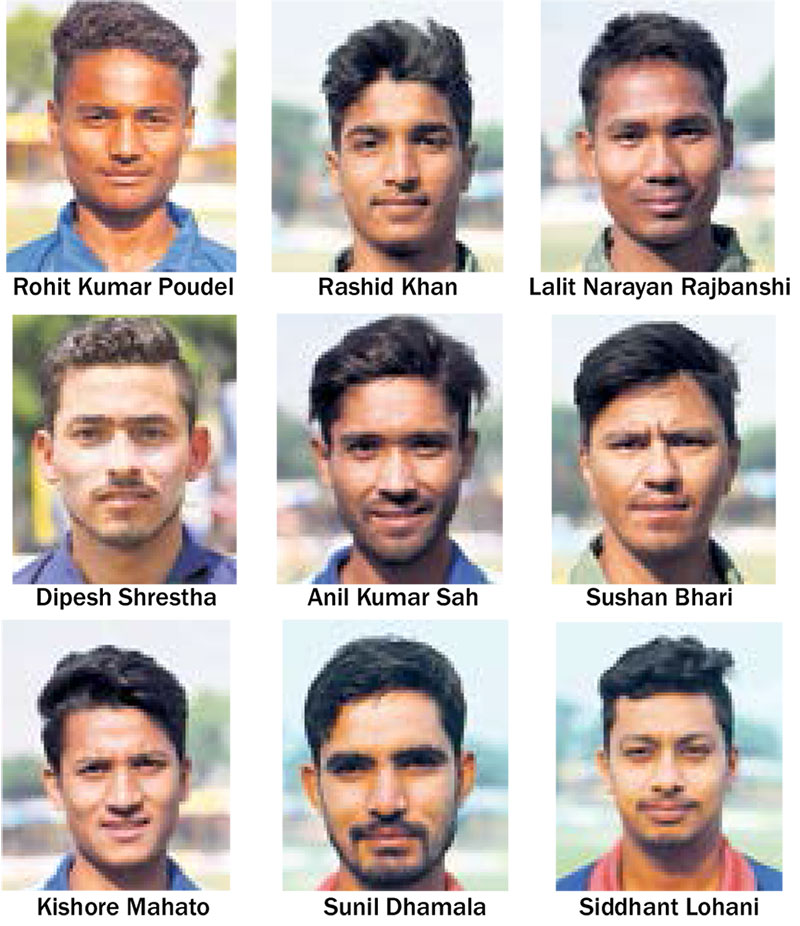 KATHMANDU, Jan 5: Nepal national cricket team’s preliminary squad has been announced for the upcoming ICC World Cricket League Division Two to be held in Namibia from February 6 to 16 this year.

The middle order wicketkeeper-batsman Binod Bhandari and all-rounder Sagar Pun have been dropped from the preliminary squad.

The duo had been featured in all the rounds of ICC World Cricket League Championship (WCLC).
National U-19 players Rashid Khan, Kishore Mahato, Rohit Kumar Paudel, Lalit Narayan Rajbanshi, and Anil Kumar Sah have been included in the 21-man squad for their good form at matches played for national and domestic teams. Anil and Rohit were involved in the previous national team camp as well.

Long time absentee pace bowler Dipesh Shrestha and left-arm spinner Sushan Bhari, who missed the seventh round of WCLC, have also been recalled in the camp for consideration in the national team.

Similarly, right-handed opening batsman Sunil Dhamala and middle-order batsman Sidhhant Lohani have made a comeback in the team after some gap. Dilip Nath remains the only recognized wicketkeeper-batsman in the squad after the omission of Binod Bhandari.

Nepal will compete with the UAE, Canada, Oman, Kenya, and host Namibia for the two spots available in the ODI table for the ICC World Cup Qualifiers 2018.

The Netherlands, Hong Kong, Papua New Guinea, and Scotland have already booked their places for global qualifiers after finishing in top four of the recently concluded WCLC.

The team will spend two weeks in the closed camp in Nepal before leaving for South Africa, where they will play at least three practice matches before heading to Namibia.

Why were Bhandari and Pun dropped?

The hard-hitting batsman Binod Bhandari, who is serving as the provisional wicketkeeper for the national team in recent times, has been dropped from the scheme of things for the final squad. Bhandari featured in all the rounds of ICC WCLC, playing nine matches without registering a single fifty-run in the two-year-long 50 overs league. He collected 129 runs in eight innings he batted for Nepal in the WCLC with the best score of 40 not out against Namibia in home turf, TU Cricket Ground in Kirtipur.

Similarly, Sagar Pun also failed to register a single fifty in the league featuring nine times for Nepal. His top score of 47 came against WCLC winners the Netherlands in opposition’s home turf. He collected 150 runs for Nepal in nine matches with a strike rate of less than 50 runs per 100 deliveries he faced. He has been prolific with the ball, picking up eight wickets but the lean patch with the bat saw him dropped from the squad.

Sudurpaschim Province Assembly meeting postponed to 4PM today
49 minutes ago
One arrested with Rs 900,000 of undisclosed source
51 minutes ago