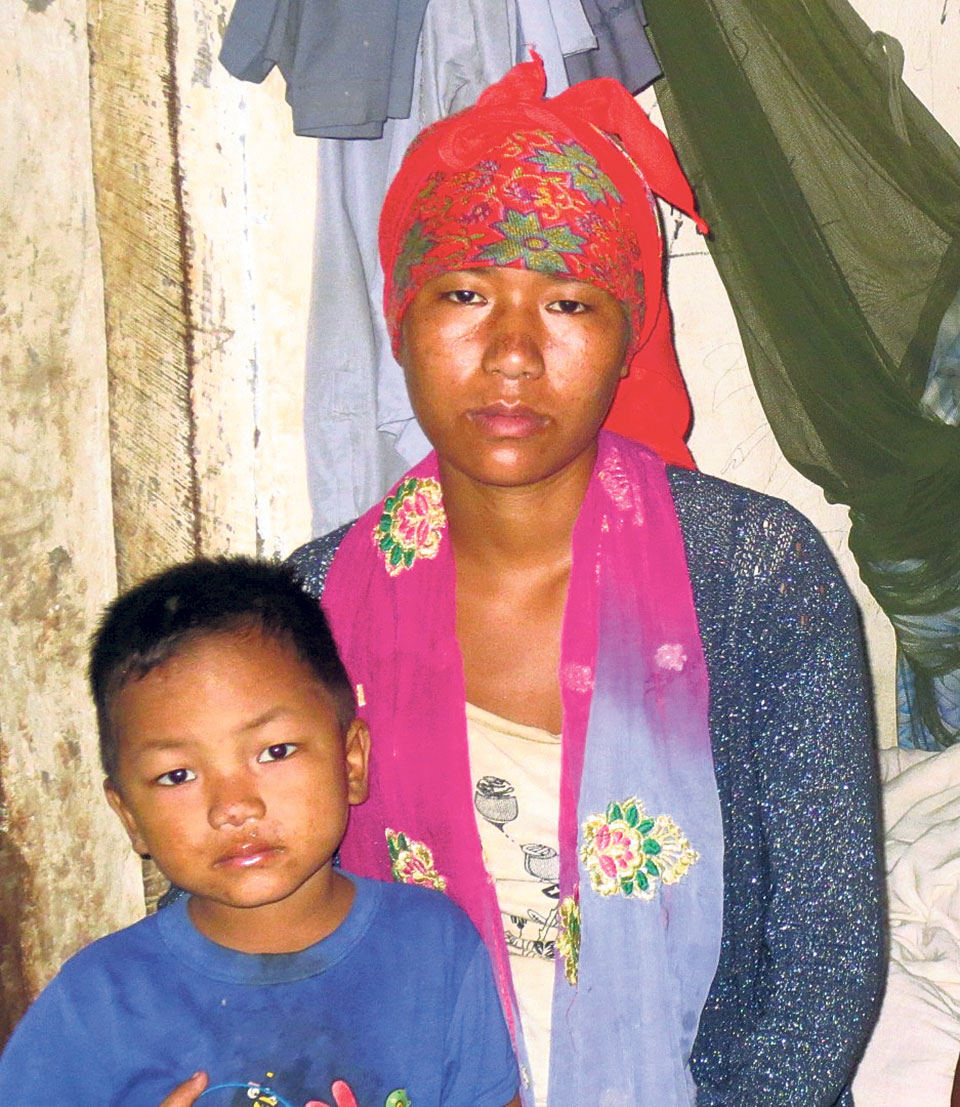 Lila Rokka and her five-year-old son.

ROLPA, July 12: Nobody advised her that she should not marry at a young age. Nor did she see anyone in her village becoming successful upon completing their studies. Like many other young girls, she dropped out of school before completing the secondary level education. There was no one to guide her young restless soul as she wandered off course.

Lila Rokka of Rolpa fell in love, dropped out of eighth grade, and got married at a tender age of 15. Her innocent mind did not question the village's tradition which dictates that people marry young. At that time, she was blissfully ignorant about life's hardships. Now at the age of 21, she is a widow.

Her husband, Rastri, 23, was among one of the causalities of the deadly road accident in Upper Mustang that occurred last Friday. Including him, the tipper accident had claimed the lives of 20 persons, all of whom were construction workers except the driver.

Lila's world has darkened all of a sudden. Her only solace is her five-year-old son but she cannot think how they are going to make a living without the child's father.

After getting married, Rastri had gone to Malaysia for foreign employment. He took some loan to pay the middleman and the agent. He spent three years working in the foreign land, but returned home empty-handed without even being able to clear the debt.

“My husband got sick in Malaysia. When he eventually returned, he wasn't able to save any money at all. Due to the hardship for survival, he had started working as a construction worker there in Mustang,” said Lila as tears rolled down her cheeks.

Her tragedy does not end there. She also lost two brothers-in-law and a sister-in-law in the same accident. Now she has to bear the sole responsibility to take care of her mother-in-law, father-in-law and the child all by herself.

Last April, the family had migrated to Dang district so that they could send their son to a good school. They admitted the son in a kindergarten of a private school. Shortly thereafter, Rastri left for Mustang, promising to earn money to support their child's education.

“Despite our loans, he wanted to see our son study even though he himself had not,” said Lila, now inconsolable. She came to the District Hospital of Rolpa to claim her husband's body and cremated him on Monday on the bank of Lungri River with the help of her parents-in-law.

After the ritual, the surviving members of the family headed to Uwa in Thabang-5 where they would live together amid uncertainties. The government has promised Rs 500,000 relief to the victims' families but it is not certain when the government will hand over the amount to the families which desperately need support.

Lila's five-year-old son, Mausum, safely tucked in his mother's arms as they walked away from the funeral site, is still too young to fully comprehend the gravity of the situation.

7 of a family 'killed' in landslide

HETAUDA, August 13: Two member of a family have died and five members of the family are feared dead after a... Read More...