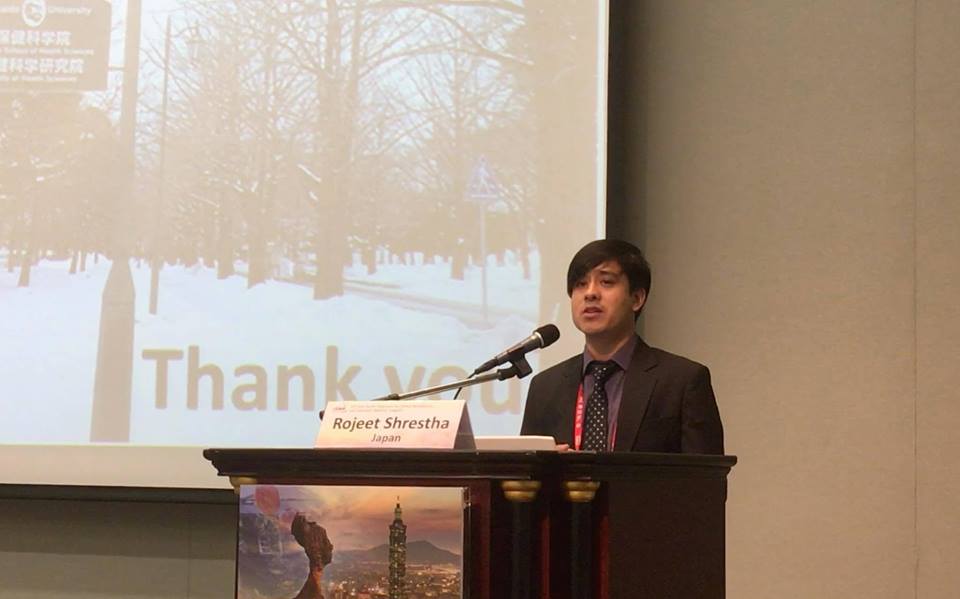 “On October 23, I received IFCC Young Investigator Award from International Federation of Clinical Chemistry and Laboratory Medicine (IFCC), here in Durban, South Africa,” said Dr Shrestha talking online with Republica. “It is a prestigious award and therefore I am proud to represent Nepal in such an international arena,” he added.

The award is one of the renowned awards in the field of laboratory medicine given to one young scientist in every three years for demonstrating outstanding scientific performance selected from worldwide. Dr. Rossa Chui (Hong Kong) in 2011, Dr. Geoffrey Baird (USA) in 2014 and Dr. Rojeet Shrestha (Nepal) in 2017 were rewarded. Dr Shrestha was selected from the candidates of 90 countries.

At the young age of 27, Dr. Shrestha joined Faculty of Health Sciences, Hokkaido University, Sapporo, Japan as an assistant professor and since then he is associated with Hokkaido University with the major interest in lipids and lipoproteins research and clinical mass spectrometry, according to the handbook published by the IFCC. He was nominated by Japanese university.

Dr. Shrestha, who hails from Balaju of Kathmandu, graduated from Rajiv Gandhi University of Health Sciences, Bangalore, India in 2005 with a distinction grade in Bachelor of Medical Laboratory Sciences started his career in laboratory medicine in his early 20’s as a medical technologist at Om Hospital and Research Center and Norvic International Hospital, Kathmandu, Nepal.

He worked in the clinical trials to improve the diagnosis of leprosy collaborating with world-renowned international institutions like Centre for Disease Controls and Prevention (CDC). He also performed independent research to assess the efficiency of micro bacteria phase assay for the rapid diagnosis and drug susceptibility of M. tuberculosis and evaluated the clinical performance of in-vitro assessment of cell-mediated immunity by demonstrating INF-γ in the diagnosis of tuberculosis in the high endemic area and evaluated its cross-reactivity to leprosy.

He was able to publish his findings as a lead author in several journals at his young age. He pursued specialized training in clinical biochemistry from 2007 to 2010 at the Institute of Medicine, Tribhuvan University Teaching Hospital, Kathmandu, Nepal with university topper and distinction grade. During his post-graduate study, he was involved in the research in wide areas of clinical chemistry and able to publish a couple of original articles as a lead author. His graduate thesis comprises robust evaluation of the predictive utility of emerging cardiac risk factors in Nepalese hypertensive subjects.

He has a wide interest in the areas of clinical chemistry that includes lipids and lipoproteins, biomarkers of kidney and liver diseases, diabetes mellitus, prostate cancer, endocrinology, and infertility. He received his doctoral degree in Health Sciences from Faculty of Health Sciences, Hokkaido University, Sapporo, Japan. His Ph.D. thesis at Dr. Chiba’s Laboratory involves the evaluation of lipid hydroperoxides in triglyceride-rich lipoproteins and development of an assay for the measurement of medium-chain fatty acids (MCFA). He exhaustively investigated the hydroperoxides of cholesterol esters and triglycerides in human plasma and lipoproteins. He has reported several cholesterol esters and triglyceride hydroperoxides in human plasma and lipoproteins and developed its assay that can be potentially useful as biomarkers of atherogenesis and oxidative stress.

Till this date, he has more than two-dozens of scientific papers in peer-reviewed journals including leading journals in the field of clinical chemistry and laboratory medicine. He has presented his research works in dozens of national and international scientific conferences.

Currently, Dr. Shrestha is an associate professor at Washington University of Barbados. Previously he was a co-investigator of Japan Triglyceride Deposit Cardiomyovasculopathy (TGCV) project funded by Japan Agency for Medical Research and Development (AMED) studying the prognostic utility of medium-chain triglycerides and fatty acids in the disease.

He is an associate fellow of US National Academy of Clinical Biochemistry (NACB). Now, he is a secretary of Lipoproteins and Vascular Disease Division (LVDD) of AACC and member of Committee for Internet & eLearning of IFCC. He is serving as Social Media Coordinator of IFCC since May 2017. He is also an active member of several other academic and professional societies and editor of several journals.