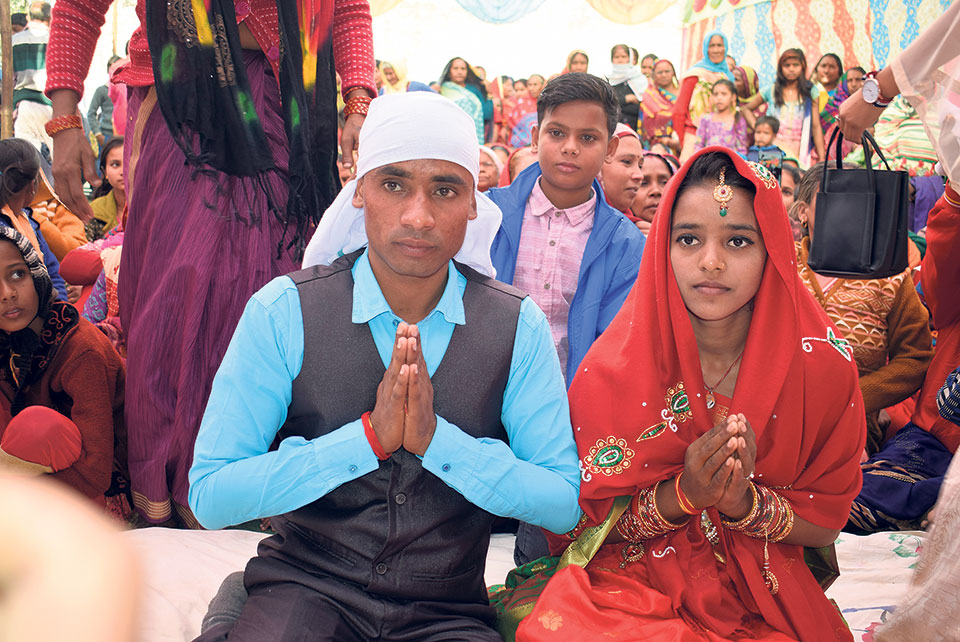 Suraj and Urmila at their wedding.

BHAIRAHAWA, Jan 8: Spending excessively on weddings has been a major problem in the country.  While some spend out of choice, most do it because of compulsion. However, Suraj Yadav, 23, a second year student of Bachelor of Business Studies (BBS) has set an example by wrapping up his wedding ceremony by spending only Rs 4,000. He is a resident of Ramgram Municipality-10 of Nawalparasi district.

Breaking with the ill practice where the family of the bride has to bear the almost entire financial burden of the wedding, even the family of the bride decided not to spend much. Bride Urmila Yadav, 22, a resident of Tilottoma Municipality-11, is a third year student of Bachelor of Education (BEd) at Manigram Rammani Multiple Campus.

In the wedding on Saturday, Urmila was wearing neither expensive jewelry nor a heavy makeup. She was moderately yet decently dressed while she sat for the wedding rituals. Impressed with the notion of simplicity, Suraj and his father had become disciples of the controversial Satguru Saint Rampal Maharaj. Later, Urmila also became one of his disciples after meeting Suraj.

Suraj and Urmila had met each other at a wedding. As they were attracted to each other, they started talking and meeting quite often. They both convinced their families and did a very simple wedding on Saturday.

Their wedding was organized by Purna Brahma Kabir Upasak Samaj Nepal. "Still, a large number of girls in our country are being killed or forced to commit suicide because of the pressure of dowry," said Suraj, adding, "But I had this thing very clear in my mind that I won't be one of those grooms to seek dowry from my in-laws. I am grateful to my parents who supported my decision."

Even today, many parents start collecting money from early so that they could spend on their daughter's wedding. Sometimes, all that they earn in their entire life is spent on their daughters' weddings. Weddings often leave poor people in debt.

Urmila's and Suraj's wedding ceremony was short and sweet as well as it was completed only in 17 minutes. Most of the Rs 4,000 was spent on buying a tent and managing tea and biscuits for the guests.

Of late, many youths have started understanding the fact that spending a large amount of money on weddings is actually useless. Some understand it through religion while most through books and awareness programs. This changing attitude has made poor parents with daughters hopeful that their daughters will not have to be tortured for dowry.