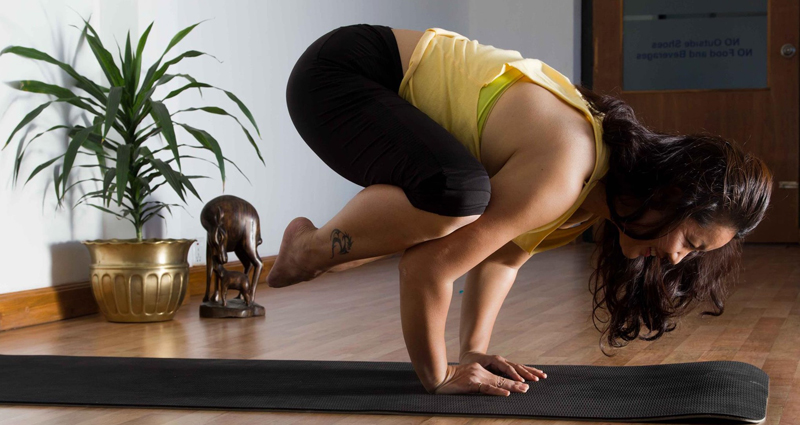 We work too much, party too hard, get little to no sleep, and don’t pay attention to our diet. Our bodies suffer a lot on daily basis and sadly, there might not be much we can do about it. But then, there’s yoga. This age old traditional practice provides a holistic approach to well-being and can be done by anyone, anywhere.

“In the earlier days, yoga was only introduced as meditation. People barely associated it with anything else other than anulomvilom, kapalbhati which was majorly endorsed by Baba Ramdev. But now we are informed about it and have recognized its benefits. That’s why it is so popular as a concentration building exercise and for weight loss as well,” says Rosy Pun, yoga instructor at Niraamayae Fitness Studio and Academy, Maharagunj, Kathmandu.

According to her, the realization of its importance along with its popularity among international figures like pop queen Madonna and actress Gwyneth Paltrow are among the main reasons why the love for yoga is growing in Nepal. The benefits of yoga are aplenty which is why everybody could benefit from it. “If you are in need of boosting your physical, mental and spiritual well-being at once, yoga is the right choice for you,” says Pun.

According to Pun, people these days have sedentary lives mostly because of deskbound jobs and this lifestyle can cause a lot of problems. Backache due to bad posture is one of the many major problems faced by today’s youths. Yoga can help because the increased flexibility that comes with religious practice of yoga prevents muscle injury and strengthens it further.

Besides that, with yoga your concentration improves, you are calmer and since it decreases the levels of cortisol in your system that rises with stress it is effective in stress management as well,” explains Pun. Yoga is also a good way to control your weight and because it doesn’t require rigorous effort like running on a treadmill or Zumba does its good for beginners.

But Pun stresses on the need to do it right and emphasizes on several things that need to be considered by beginners. Here’s what she has to say:

For a beginner, it’s best to research about what kind of class suits you and be mentally prepared for it. Generally, it’s good to start with Hatha yoga or even Bikram yoga due to their slower pace and predictable sequence. However, if you like a challenging yet orderly approach, try Ashtanga. You can later upgrade to more stimulating forms.

Make sure to bring a bottle of water and a towel. Some studios provide mats but it’s better to bring your own as it’s more hygienic.

There’s no such thing as age barrier for yoga. However, certain asanas may not be feasible for some people. Body flexibility decreases with age which might cause difficulty but with time and practice, you can overcome these issues.

If you just underwent surgery, child delivery or have a health issue, consult with your doctor before practicing or resuming yoga and also seek advice on which sequences best fit you. For instance, sarvangasana, halasana and matsyasana are ideal for those with thyroid problems.

Yogis believe in ahimsa, i.e. non-violence. That’s why their simple, nutritious diet reflects their modest way of living. To get the most from yoga, one should refrain from junk food, alcohol, and smoking and rely on natural and incorporate healthy food items in their diets.

Trying out yoga poses by looking at YouTube videos and magazines can be fun but it’s recommended only if you have prior experience. If you are new to yoga, then this tactic might lead to problems because of wrong stretching and postures. Without proper guidance, you will not know if you are doing it right. As in Cobra asana, people often get their hand position wrong, applying pressure in wrong part of the palm and complain about wrist pain. To avoid any injury, it is safe to learn the basics from a yoga guru first and then do it on your own when you are confident enough.

Research thoroughly about instructors and choose certified ones for quality training.

Learning from uncertified and self-trained people can have consequences you really wouldn’t want to face.

Yoga classes are affordable and there are many packages you can choose from if you are serious about your health. Personal training for those with tighter schedules can cost a bit more though.

KATHMANDU, June 17: The Embassy of India, Kathmandu, organized a Yoga Event at Namche Bazaar — the gateway to the world's... Read More...

Instagram is one of the hottest social networks right now. It's visual, it's quick, it's mobile and it's pretty simple... Read More...

Bhaktapur to be declared first ever Yoga district of Nepal

BHAKTAPUR, Sept 23: Preparations for declaring Bhaktapur district the first ever Yoga district in the country are over, according to... Read More...