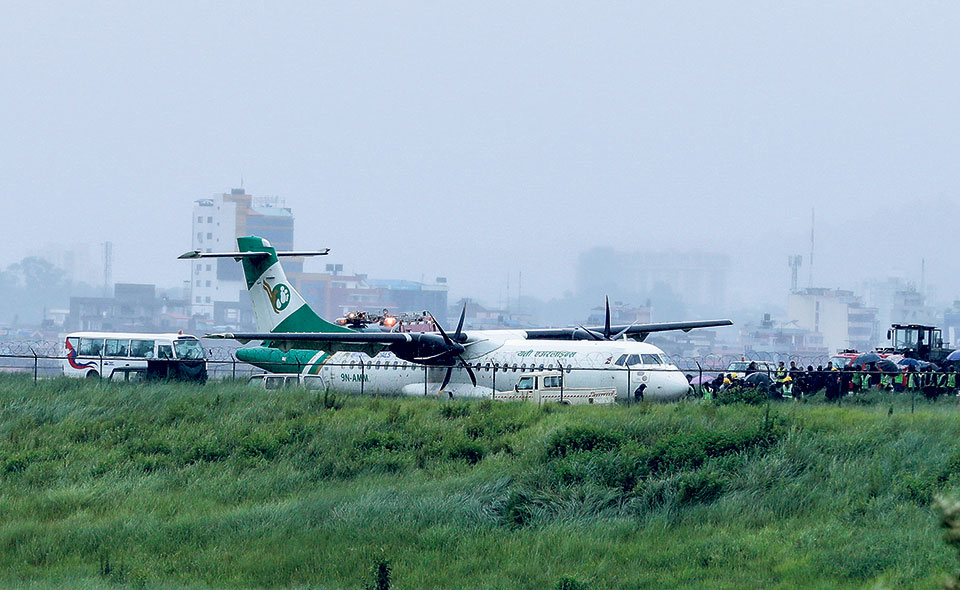 The Yeti Air plane that skidded off the runway while landing at Tribhuvan International Airport on Friday monring was removed after eight hours at 7 pm. All on board the plane are safe. Photo: Prakash Shrestha/Republica

The plane with call sign 9N-AMM was removed at 7 pm after eight hours of efforts. Immediately after the removal of the plane, the airport reopened.

Though the Yeti aircraft coming from Nepalgunj landed at the domestic terminal, all international flights had to be halted as both the domestic and international terminal share the single runway. The plane had skidded 10 meters off the runway and stopped at the nearby grassland.

The TIA had issued a notice stating that the airport would remain closed until 7 pm. The airport shutdown caused chaos at the airport as hundreds of domestic and international passengers were stranded throughout the day.

“As the rain continued throughout the day and the area turned too muddy, removing the aircraft became more difficult,” Raj Kumar Chhetri, the general manager of the Tribhuvan International Airport (TIA), told Republica.

International, as well as domestic flights to and from Kathmandu, were cancelled and most of the flights to Kathmandu were diverted elsewhere.

On Friday, Buddha Air was able to conduct only its first flight whereas it cancelled all other flights scheduled for the day. “Buddha’s first flight from Kathmandu was for Kolkata and while returning to Kathmandu, the plane was diverted to Bhadrapur,” said Binita Thapa, marketing manager at Buddha Air, adding, “We had to keep additional 8 aircraft outside the valley on hold.”

Some people said that Friday’s closure of the airport has further underscored the urgency of building an alternative international airport in the country.

“Flew for 3 hrs from Guangzhou to Kathmandu and diverted back. Shame on us that many domestic and international airlines have to bear loss as Yeti Airlines skipped off the runway while landing on the only international airport in Nepal,” Kriti Bhuju, a PhD student at Communication University in China, wrote on Facebook. “This reminds the authorities that the construction of 2nd international airport should be expedited.”

A similar incident involving a Turkish Airlines plane in 2015 had brought the airport to standstill for 4 days.

780 foreigners repatriated in a single day

KATHMANDU, April 5: A total of 780 foreigners have been repatriated in four different chartered flights from Kathmandu on Saturday. Read More...

KATHMANDU, March 18: The number international flights to and from Tribhuvan International Airport (TIA) continue to decline with the issuance... Read More...