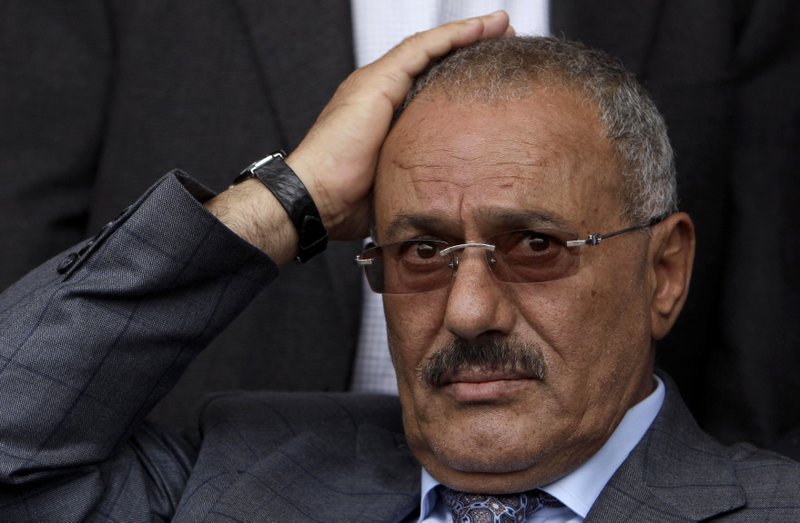 SANAA, Dec 5: The killing of Yemen’s longtime strongman and ex-President Ali Abdullah Saleh by the country’s Shiite rebels as their alliance crumbled amid street clashes in the capital, Sanaa, has thrown the nearly three-year civil war into unpredictable new chaos.

A video circulating online on Monday showed Saleh’s body with a gaping head wound dumped in a pickup truck by rebels — a grisly end recalling that of his contemporary, Libya’s Moammar Gadhafi, in 2011.

Saleh’s slaying likely gives the rebels the upper hand in the days-long fighting for Sanaa while also shattering hopes by Yemen’s Saudi-backed government that the former president’s recent split with the Iranian-backed rebels, known as Houthis, would have weakened them.

That would give Yemen’s internationally recognized government and the Saudi-led coalition backing it and waging war on the Houthis a chance for a turning point in the stalemated conflict that has brought humanitarian disaster.

But with Saleh’s forces seemingly in disarray, it was not immediately clear if the Saudi-led coalition will be able to turn the split to its advantage in the war.

It was a grisly end for Saleh, who ruled Yemen for more than three decades until an Arab Spring uprising forced him to step down in 2012. He later allied with the Houthi rebels hoping to exploit their strength to return to power. That helped propel Yemen into the ruinous civil war that has spread hunger and disease among its 28 million people.

Saleh’s death was announced by the Houthis and confirmed by two Saleh associates and a Yemeni government official. The exact circumstances were unclear: Houthi officials said their fighters killed him as he tried to flee the capital for his nearby hometown of Sanhan. The Houthis’ top leader said Saleh paid the price for his “treason,” accusing him of betraying their alliance to side with the Saudi-backed coalition.

Houthi and Saleh-loyalist forces have been fighting in Sanaa since late last week. The Saudi-led coalition has been hitting Houthi positions with airstrikes, hoping that having Saleh on its side after his split with the rebels could provide a foothold in the capital for the forces of the Saudi-backed president, Abed Rabbo Mansour Hadi.

But by Monday evening, hours after Saleh’s death, witnesses said his forces had abandoned some of their positions in Sanaa and that Houthi fighters had moved into one of the most heavily contested districts, seizing Saleh’s house and those of some of his family members. Saudi airstrikes hit several Houthi positions in the evening, but otherwise the city saw the first easing of fighting in days.

In a televised speech, the Houthis’ top leader, Abdul-Malek al-Houthi, called Saleh’s killing a “dark day for the forces of the coalition.” He said he had known Saleh was communicating with the coalition and had warned him to stop.

Hadi, in turn, gave a televised speech of his own on Monday from the Saudi capital, Riyadh, where he has been in self-imposed exile for most of the war. He tried to rally Saleh’s allies to keep up the fight against the Houthis.

“Let’s put our hands together to end this nightmare,” Hadi said. He said his government forces would support any “uprising” against the Houthis in Sanaa.

An official in Hadi’s government told The Associated Press that members of Saleh’s political party and military forces were cooperating with the coalition and would provide coordinates for airstrikes against the Houthis. He said strikes will intensify so that the closest pro-Hadi ground troops — located at Nihm about 48 kilometers (30 miles) northeast of Sanaa — can push toward the capital.

The hope is that as the forces advance, tribes in the area will be encouraged to rise against the Houthis, he said, speaking on condition of anonymity to discuss the plans.

One of Saleh’s sons, Salah Saleh, posted a call on his Facebook page for his allies to take up the fight against the rebels. He also urged the United Arab Emirates to allow Saleh’s most prominent son, Ahmed Saleh, who headed the elite Republican Guard under his father’s rule, to return to Yemen and lead forces against the Houthis.

When Saleh left power, he stayed in the country and kept the loyalty of many military commanders, splitting the armed forces between himself and Hadi. Saleh’s forces were key to helping the Houthis overrun Sanaa in 2014 and then much of the north and center of the country.

But over the past year, the Houthis appear to have undermined Saleh, wooing away some of his commanders, strengthening their own fighters and reducing their need for him. It appears that pushed Saleh into flirting with the coalition, ultimately leading to the breakdown of the alliance with the Houthis and the recent outbreak of clashes.

The fighting has brought new suffering to Sanaa’s residents.

“No one is safe in Sanaa at the moment. I can hear heavy shelling outside now and know it is too imprecise and too pervasive to guarantee that any of us are safe,” she said.

Residents said the night was shattered by the sounds of gunfire and children screaming.

Witnesses said the bodies of slain civilians and fighters littered the streets as no ambulances were able to reach the area. The ICRC said at least 125 people had been killed and some 240 wounded in Sanaa since the fighting began last week.