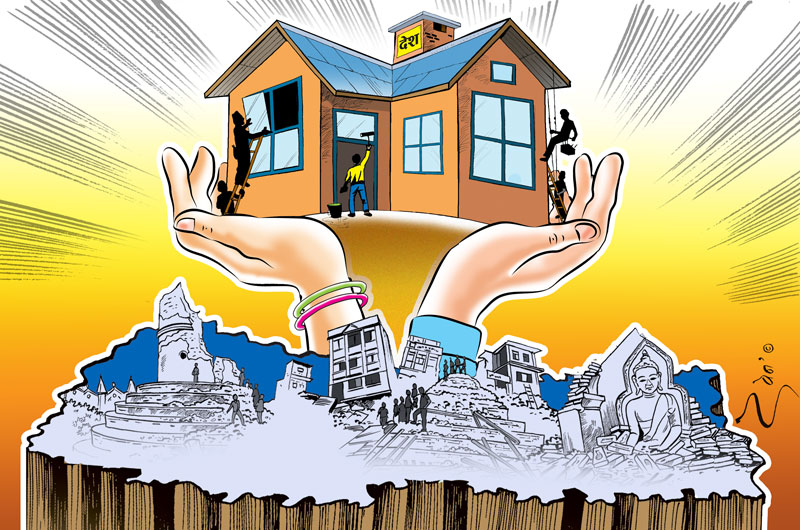 Reconstruction is behind schedule despite good intentions but we are picking up pace
Two years ago, we Nepalis were jolted by the biggest disaster of our lifetime. The impact was devastating. Nearly 9,000 people lost their lives, thousands were injured and millions lost their homes and livelihood.

The impact of the tragedy was compounded by our lack of readiness to cope with a seismic event that we knew was overdue, yet, as a society, we were inadequately prepared to deal with the crisis. Clearly, our infrastructures and institutions were not designed to withstand such a mega earthquake.

Despite the odds, effective rescue and relief efforts were critical in saving thousands of lives in the immediate aftermath of the earthquake. Both the state institutions and the citizens came together in extending a helping hand to the survivors—exemplifying the strength of our social fabric. Neighboring countries and international organizations also played a vital role in bringing in the invaluable expertise and assistance. Unfortunately, subsequent recovery and reconstruction efforts failed to maintain the same degree of coherence and effectiveness. Reasons for the delay are numerous, but the fundamental constraints boil down to political fragility, poorly capacitated and conventional bureaucracy and inadequate and inflexible resources.

The challenges
As we enter the third year of rebuilding since the earthquake on April 25, 2015, many of the same problems continue to stymie our efforts to extend helping hands to thousands of survivors.

Reconstruction is a holistic process that encompasses not only the physical but also the social and economic aspects of reconstruction. We are faced with basically four sets of challenges.

1) Mobilization of competent human resources. We are urging all partners to support us to produce and mobilize adequate human resources. There is a huge need for trained human resources on the ground. This is also the right time to empower women and build capacities of marginalized communities to enhance their livelihood options while engaging them in the reconstruction process.

I urge partners to contribute by providing trainings to them. I have also urged stakeholders working with migrant workers to consider engaging them for two or three months here in Nepal so that they can acquire more knowledge and skills while helping their country.

2) Coordination and cooperation. While the National Reconstruction Authority (NRA) has been adopting a flexible approach, the current level of coordination is far from ideal. We are trying to improve coordination mechanisms and ensure effective cooperation, but they require proactive efforts from all partners and stakeholders, especially the private sector. As the NRA is heavily relying on relevant ministries and partners to implement programs, only close coordination and collaboration can create synergy and enhance the pace of resource optimization and reconstruction.

Communities need to be involved in promoting livelihood options and rebuilding public infrastructure, including heritage sites, to maintain their ownership.

3) Funding gap. The Post Disaster Recovery Framework had identified that US $9.3 billion would be needed for reconstruction. So far, the pledged amount from our international development partners stands at $4.1 billion. Agreements worth nearly $3.2 billion have already been signed. Many international partners, national organizations and individual philanthropists have also contributed significantly.  This effort will have to continue to fill the gap.

4) Systems and processes for a resilient Nepal. In order to prevent another natural calamity from turning into a huge disaster, we need to put in place a set of standard guidelines, operating procedures and systems, including strict implementation of building codes. Social cohesiveness, empowerment of underprivileged groups and vulnerable communities, and a culture of adopting the practice of ensuring easy access for differently-abled people and minority groups to all public infrastructures have to be built. Single women, landless people and vulnerable communities should not be left behind. Revitalizing a culture of restoring our heritage with enhanced resilience while maintaining our traditional values are necessary.

Weakening of NRA
The outpouring of goodwill from our citizens as well as from the international community has been overwhelming. But somewhere down the line, we lost track of our own national commitment. During the International Conference on Nepal’s Reconstruction in June 2015, the government promised the formation of a powerful National Reconstruction Authority (NRA), with the power to fast-track public procurement of goods, services and processes for reconstruction. When the NRA was first formed through an ordinance, it was given considerable authority in line with the commitment.

But that was undone when the NRA was re-established later after the ordinance for the first one was allowed to expire.  What this has done is forced the NRA to become just another government institution tangled in layers of bureaucracy without the ability to fast-track decisions and processes. A culture of delegating power to higher authorities was established. For example, even a simple format of the application required to claim the first housing installment by quake survivors had to be approved by the Cabinet.

Since I was reappointed the NRA’s CEO in January 2017, I have tried to make most out of the current system by simplifying procedures, processes and guidelines for reconstruction, getting the executive committee to take some decisions itself, while trying to ensure utmost cooperation between multiple line ministries, departments, development partners and stakeholders. Recently, we have made a decision to provide an additional grant of Rs 200,000 to buy land for families living in risk prone settlements and landless families affected by the earthquake.

Opportunity
This reconstruction process also needs to be taken as an opportunity to build a modern Nepal—rectifying the flaws in our erstwhile development approach and design—by focusing on social and livelihood needs besides the physical ones. This is also an opportunity to make our society more equal by giving due priority to marginalized groups and women.

Despite good intentions and sincere efforts, we are behind schedule on reconstruction. We have not been able to help quake survivors build their homes in two years as envisaged in the original timeline.

In retrospect, our reconstruction process has become a trial and error endeavor. Such a learning-by-doing approach has taught us valuable lessons. As we mark the second anniversary, I am confident that we are past the error stage, and that we will see reconstruction gathering momentum from here on.

By the time we mark the third anniversary next year, I, as the NRA’s CEO, commit to create a facilitating environment where all willing and participating families will be able to rebuild their homes—by ensuring that all three installments of housing grants are distributed. But the NRA or the government alone cannot come up with innovative and entrepreneurial ideas and modalities to realize our dream of a resilient, inclusive and holistic reconstruction process.

Therefore, I appeal to everyone—both in Nepal and outside—to be part of this national rebuilding goal with your ideas and financial support. My door is open to anyone with good ideas or expertise.

We in the NRA are adopting a flexible approach to doing things. With your help, we can make this third year a year of proper reconstruction.

Pokharel is the CEO of the National Reconstruction Authority

KATHMANDU, Jan 19: January 16 marked the completion of three years since a foundation stone for the reconstruction of famous... Read More...

GORKHA, Feb 21: Work has finally begun to repair and rebuild the police posts that were damaged during the decade-long Maoist... Read More...