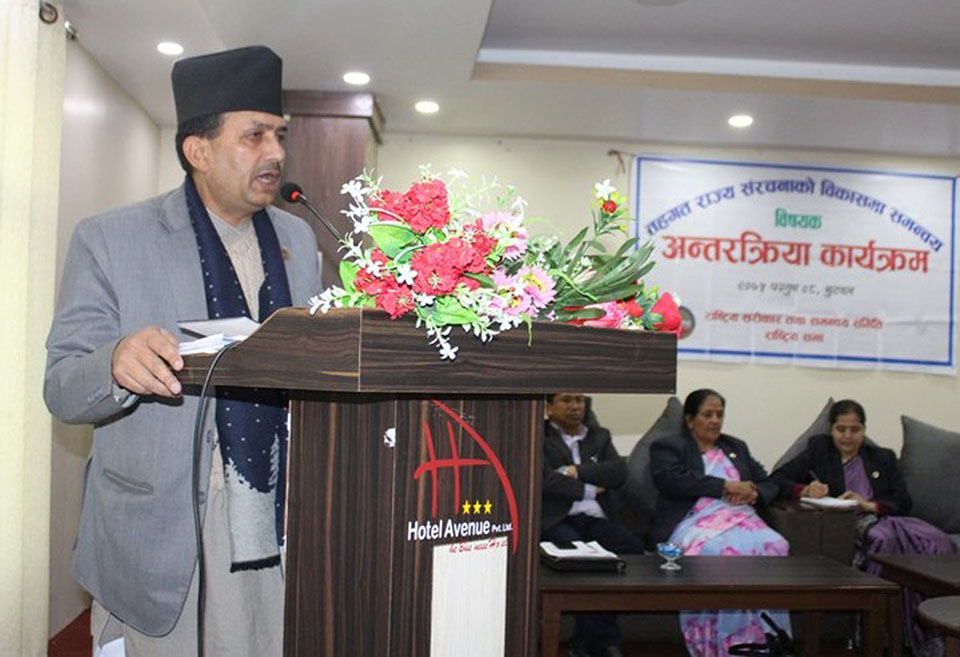 RUPANDEHI, Feb 20: Minister for Law, Justice and Parliamentary Affairs, Bhanubhakta Dhakal, said the Nepali year 2075 BS would be a historic one in terms of formulation of laws.

Speaking at a discussion programme held in Butwal to clear confusions emerged regarding the issues of resource mobilization and its allocations, the Minister said the year 2075 has been significant not only in terms of number but also in view of enactment of exceptionally good laws.

So far 26 new laws demanded by the constitution have been enacted and all bills except the National Medical Education Bill were passed on consensus and 47 bills have been presented before the House of Representatives, he shared.

There is a constitutional mandate to replace the laws in consistence with the constitution by new ones by coming March 5 and the works to that end are going on.

He went on to say that the federal government was working keeping the formulation of new acts and laws at the center as it sought to ensure the effective enforcement of federalism.

Bills relating to province public service Commission, police administration, peace and security, land use and industry and issues of public concerns have been presented in the House, according to him. Also speaking at the programme, National Assembly vice chair Shashikala Dahal underlined the need of formulating the laws in line with the constitution.

NA member Khimlal Bhattarai asserted that all three levels should be clear about their rights in the new federal setup. The province should turn out to be a model in view of the systematization of federalism.

Province State Assembly Speaker, Purna Bahadur Gharti, was of the view that only protection and promotion of people's rights would strengthen republic.

BUTWAL, Nov 4: Truck entrepreneurs of Province 5 have made it clear that they won't allow the government to add... Read More...

RUPANDEHI, July 15: Nepali entrepreneurs have been increasingly interested toward investing into hotels in Rupandehi district in view of the... Read More...

DHANGADI, April 20: With a surprise journey in the tournament, Dhangadi Team Chauraha has placed itself in the final of... Read More...