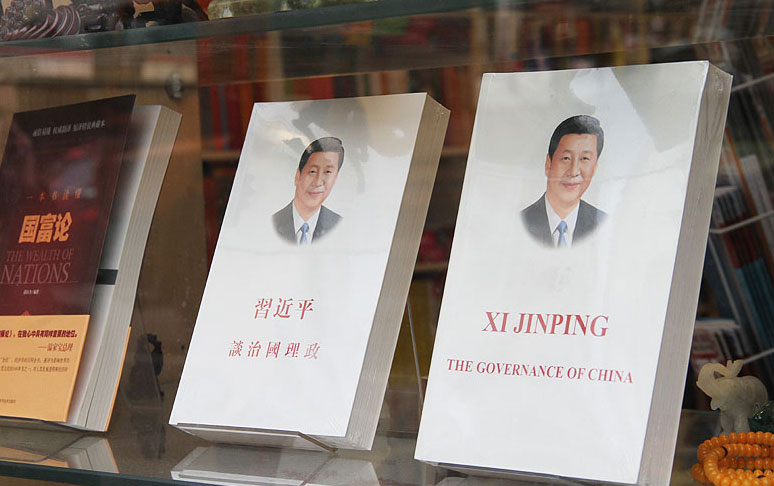 English edition of the book 'Xi Jinping: The Governance of China' was published in 2014. [Agencies)

BEIJING, June 26 : A book on governance written by Chinese President Xi Jinping marked the 1,000-day anniversary of its debut over the weekend, setting a new record in China's publication history in 40 years with over 6.25 million copies in 22 languages already in print worldwide.

Titled "Xi Jinping: The Governance of China," the work has drawn worldwide readers to the mysteries of its popularity and left a profound impact on the world.

A selection of 79 chapters of speeches and notes made by Xi from his election as general secretary of the Communist Party of China (CPC) Central Committee in 2012 to June 2014, the book is known for being a "window" to the Chinese leadership and a "key" to China's development success.

Russian scholar Yuri Tavrovsky introduced Xi's innovative reform measures to Russian readers in a recent book, and Facebook CEO Mark Zuckerberg not only has one for himself but has bought more for his colleagues so that they would "understand Socialism with Chinese Characteristics."

Though nearly three years have passed since the first launch of the book, the demands for local language versions are still growing.

A dozen of the existing 22 language editions were released at the request of foreign countries, and by the end of 2018 another 13 language versions are expected to add to the series, said Xu Bu, president of Foreign Languages Press, the book's publisher.

Speaking of the charm of Xi's book, Seubpong Changboonchu, a teacher at Thailand's Chulalongkorn University and one of the translators of the Thai version, said the Chinese president reminded him of famous Japanese football cartoon "Captain Tsubasa."

"The main character was a resilient person who worked really hard to make his dreams come true," he said, referring to Xi's elaboration on the Chinese dream of great national rejuvenation.

Instead of painting an illusionary picture, Xi drove home his belief that "hard work makes dreams come true." He went to great lengths to address "all-round and deeper-level reform," listing over 330 major measures in 15 fields, including fighting corruption and improving the judicial system.

"Xi's thoughts are focused on the fundamental problems occurring during China's transition from a big country to a strong country, and his governance practice is aimed at accomplishing the historic tasks that come with this period," said Han Qingxiang, a professor of the Party School of the CPC Central Committee.

In the past five years, thanks to its strong determination and effective execution, China has lifted over 60 million people out of poverty, created 64 million new jobs in urban areas, universalized nine-year tuition-free compulsory education, and established the world's biggest healthcare and social security system.

Impressed by the success of the Chinese path, Uzbek President Shavkat Mirziyoyev, in his foreword for the Uzbek edition, said Xi's book offers important inspiration and guidance on governing a country, developing a market economy that fits national features, and protecting public interests.

In about two years, Pakistan issued both the English and the Urdu versions of the book. Chairman Mushahid Hussain of Pakistan's Senate Defense Committee, who attended both publishing ceremonies, told Xinhua that he had learned a lot from Xi's experience of communicating with the people when he worked as party chief in an eastern Chinese province.

With the West haunted by terrorism, refugee waves, financial crises and political deadlocks, more and more countries are joining China's initiatives such as the Belt and Road and the building of a community of shared future for mankind.

French author Sonia Bressler first read the book two years ago and was fascinated by Xi's thoughts on "peaceful development." Having recently reread the work, she commented that China's aim for "mutually beneficial cooperation" is just as relevant to today's world as ever.

"At a time when some countries wrestle over global governance reform, China sticks to a more open and inclusive path forward, which answers the call of history and accords with international public opinion," said Qin Yaqing, president of China Foreign Affairs University.

"It is an important reason both behind the growing global support for Chinese initiatives and behind the lasting global attention on Xi's book," he added.

Major publishing houses from 16 countries have signed memorandums with the Foreign Languages Press (FLP) to translate and publish the... Read More...

In Nepal, when young people respectfully bow down to greet family elders, they receive blessings of good health and long... Read More...