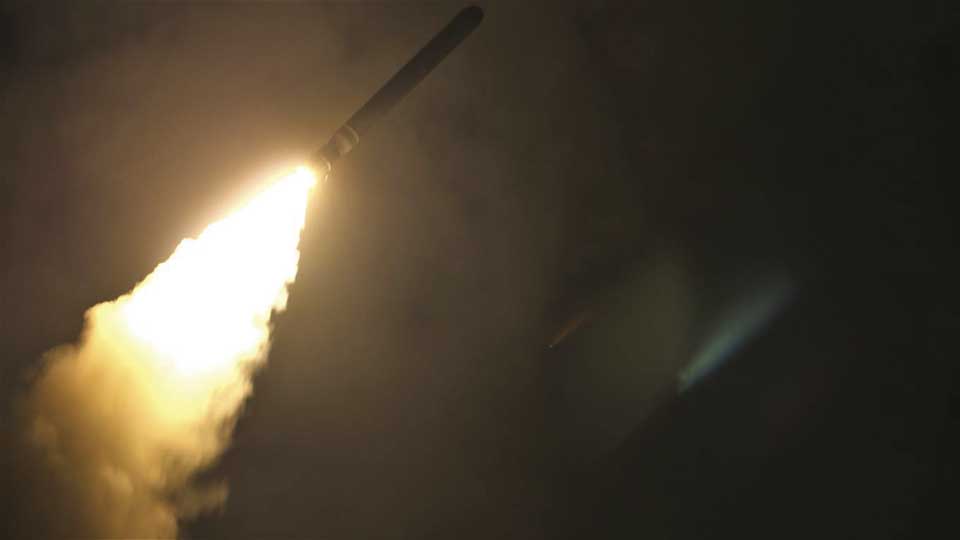 Somewhat smaller strike undertaken a year ago failed to change Syrian behavior, and the latest attack is no more likely to do so.

NEW YORK, April 24: “A perfectly executed strike…Could not have had a better result. Mission Accomplished.” So tweeted US President Donald Trump just hours after more than a hundred American, French, and British cruise missiles hit three sites in Syria believed to be associated with chemical weapons production.

The mission that was “accomplished” was to deliver the message that using chemical weapons would not be cost-free for those responsible. Ideally, punitive strikes such as these would deter Syria’s government, or any other, from ever using chemical weapons again in violation of the Chemical Weapons Convention.

But it is far from clear that Trump has achieved that deterrent effect. The somewhat smaller strike undertaken a year ago failed to change Syrian behavior, and the latest attack is no more likely to do so. What Bashar al-Assad’s government achieved with chemical weapons—gaining control of rebel-held areas in Douma and eastern Ghouta—outweighed the price it paid. And it is a near-certainty that the Syrian government continues to possess chemical weapons, and could produce additional supplies without detection.

Syria is likely to
remain a broken
country for years to come, with an illegitimate government that controls most but not all of
the state’s territory.

Military action to enforce the international norm against the use of chemical weapons is legitimate and welcome, as was the decision to coordinate the response with allies and to threaten additional strikes if chemical weapons were used again. It is important to signal that opposition to the use of any weapon of mass destruction is both deep and broad.
At the same time, the United States appears to have gone to considerable lengths to avoid engaging Russian and Iranian forces. This reduced the risk of escalation, but it also ruled out many potential targets, limiting the price paid by the Syrian government for what it had done. For this and other reasons, what the missile strikes accomplished should not be exaggerated.

The Syrian government could reasonably interpret US policy as follows: “We will stand by and do nothing while you terrorize or kill your own people so long as you do not use chemical weapons.” In fact, this has been the case for the past seven years, as nearly a half-million Syrians have died and more than ten million have been forced from their homes. Trump’s foreign policy is not so much immoral as it is amoral.

It bears emphasizing that the missile strikes were not designed to undermine the Assad regime’s long-term prospects. Thanks in large part to Russian and Iranian support, Assad is firmly in control and will likely remain so for the foreseeable future. This is a bitter pill for many to swallow, but it is the reality.

So where does this leave US policy and, for that matter, the policy of the French, British, and anti-Assad Arab governments? Trump remains committed to ending America’s military presence (now some 2,000 troops) in Syria. He made this clear when he announced the missile strikes: “America does not seek an indefinite presence in Syria under no circumstances,” he said. “As other nations step up their contributions, we look forward to the day when we can bring our warriors home.”

But if the goal is to avoid creating a situation in which the Islamic State (ISIS) or other terrorist groups could reconstitute themselves, that day remains far off. The US is reportedly attempting to persuade Egypt, Saudi Arabia, the United Arab Emirates, and Jordan to create a Sunni force that would maintain order in areas liberated from ISIS. It is far from clear whether such a force will come into being, and even less certain that it could stand on its own, given these countries’ modest capabilities and extensive commitments.

A considerable US military presence and involvement will still be required.
An ongoing US troop presence is also required to maintain coordination with Syrian Kurdish forces, who did most of the fighting against ISIS. But sustaining support for the Kurds without causing additional problems with Turkey, which has introduced forces into the area to weaken Kurdish control, may prove impossible. That fact calls for reducing US military reliance on access to Turkish bases.

Trump has said nothing about the plight of internally displaced Syrians. America, which accepted more than 10,000 Syrian refugees as recently as two years ago, has rolled up its welcome mat, accepting only a trickle last year. And the matter of who should pay, and how much, to support Syrian refugees and the neighboring countries that have taken them in remains unresolved.

A final question involves diplomacy. There is no realistic hope of engineering a political transition in Damascus, but it may be possible to arrange local cease-fires and create areas where Syrian civilians (but not government forces) could live in safety. Such arrangements, however, would likely require Russian involvement and support to keep the Syrian and Iranian governments on board. Russia has acted irresponsibly of late, but there remains the chance it will choose to offer limited help, if only to hold down the costs of its Syria policy.

None of this adds up to a solution; Syria is likely to remain a broken country for years to come, with an illegitimate government that controls most but not all of the state’s territory. But limiting the violence and improving the lot of at least some Syrians might be possible if the US does not rush to leave, if Sunni governments contribute soldiers and money, and if Russia can be persuaded to play a somewhat more constructive role.

Richard N Haass is president of the Council on Foreign Relations and author of
A World in Disarray  © 2018, Project Syndicate www.project-syndicate.org

No amount of triumphant rhetoric can obscure the West’s betrayal of the Syrian people, nor disguise its lack of any... Read More...