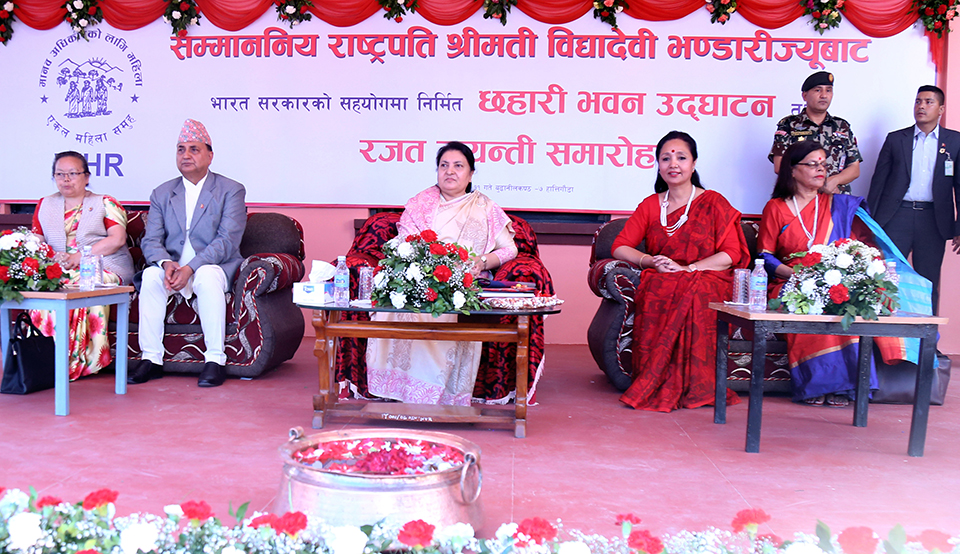 KATHMANDU, May 25: President Bidya Devi Bhandari has said the conscious community should mobilize to take the country ahead towards the journey of a secured social change and prosperity through patience, courage and in a judicious manner. Head-of-the-State Bhandari opined so while inaugurating the newly-constructed Chhahari Bhawan, a shelter home for single women, at Hattigaunda, Budhanilkantha municipality-8 today.

The shelter is constructed by Women for Human Right, Single Women Group. The shelter is constructed through the cooperation provided by the Government of India. The President said that such efforts would make the society, nation and the entire world civilized thereby bringing happiness and prosperity in human life. Stating the effective implementation of the important provisions adopted by the state would contribute to the all-round development of women, she said much bigger efforts were needed to destroy the harmful social and cultural values and traditions that are entrenched in the base of society since centuries.

"It is the state's constitutional responsibility to build society based on social harmony by fostering a healthy and civilized culture. There is provision of social security in the constitution for the helpless and single women in the form of a fundamental right," the President said, adding that the policy of positive discrimination and laws have also been formulated for the uplift of women and their development.

There is also constitutional resolution to wipe out the social and cultural anomalies and evil practices existing in the country, she reiterated.

Deputy Prime Minister and Minister for Defence, Ishwor Pokharel said although discrimination in society has basically ended from the political and constitutional perspective, it, however, remained from the social, cultural and economic aspect. "Our efforts are towards removing the disparities seen in society by means of social awareness and consciousness. We need to initiate a social campaign towards that end," DPM Pokharel said.

Minister for Women, Children and Senior Citizens, Thama Maya Thapa said the campaign for securing the rights and respect for the single women begun 25 years back has become successful in organizing the women from across the country. "Even today, women are becoming victims of domestic violence in Nepali society which carries with it a baggage of feudalistic culture. There is an urgent need of undertaking a social campaign against such anomalies, aberrations and oppression," the Minister insisted.

WHR founding chairperson Lily Thapa said so far 160,000 single women were organized in the Group that was set up with the thinking of implementing a campaign that a single woman should not face any kind of discrimination merely because of her single status. "The code of conduct that women are subjected to in society in the name of religion and culture is a symbol and mindset of a patriarchal society. This needs to be dismantled," she said.

Five hundred representatives from 76 districts are attending the program organized to mark the Silver Jubilee of the establishment of the Group. The Group has been working as an agent of social change. As per the latest census conducted in 2011, the number of widows is 601,000 or 5.8 percent of the country's total population.

Group chairperson Kunta Sharma reiterated the need of banishing all types of social evils and discriminations through the concerted efforts of all sides as these kinds of ill practices tie the single women in the shackles in the name of religion and culture. It was shared on the occasion that there is still discrimination between sons and daughters in society by which the sons are given education while the daughters are married off at small age.

The number of illiterate single women was 86 percent of the total single women population. Ten thousand women were widowed due to the decade-long conflict in the country. The Group has constructed such shelters for single women at 16 various places of the country before this. One hundred and forty-six single women are serving as people's representatives in the federal, state and local level throughout the country.

The case of the cultured daughter-in-law

After I got married, I was asked to make tea the next morning. I had never made tea at home.... Read More...

XIAN, April 24: President Bidya Devi Bhandari, who is on the State Visit to China at the invitation of her... Read More...

Rainfall likely to continue for three more days
30 minutes ago