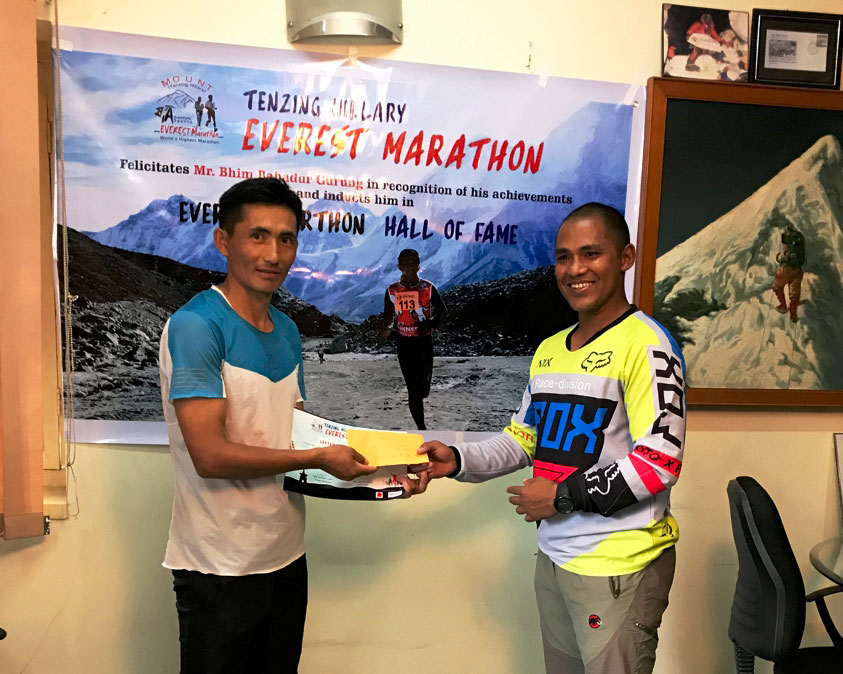 Shikhar Pandey, event manager of the Tenzing Hillary Everest Marathon, presented a letter of felicitation to Gurung and also inducted him to Tenzing Hillary Everest Marathon Hall of Fame. He also provided a cash prize of USD 1,000 to support Gurung’s participation in upcoming Salomon Glen Coe Skyline race – a part of Migu Run Skyruner World Series 2017 – to be held in Scotland on September 17.

Born at Pokhari in Arughat Municipality of Gorkha in 1981, Gurung started participating in long-distance running events from 2009. The Tribhuvan Army Club (TAC) athlete has won numerous long distance marathons at both home and abroad.

Similarly, Gurung was also a part of four-member Nepali team that won three editions of the prestigious Hong Kong Oxfam Trailwalkers – a 100-kilometer run – in 2013, 2014 and 2016.

“Foreign athletes always respect us. They often joke that there is no chance of winning the race when Nepali athletes are participating. It is always good to get such respect,” he said, adding: “I am happy to have been able to make my institution – Nepal Army – and my country proud.”

The untiring runner is happily married and proud father of two sons. He has won eight gold medals and two silver medals in international long-distance running events. I have won more than two dozen gold medals in events organized in Nepal, he adds.

Former athlete Rokaya to be felicitated