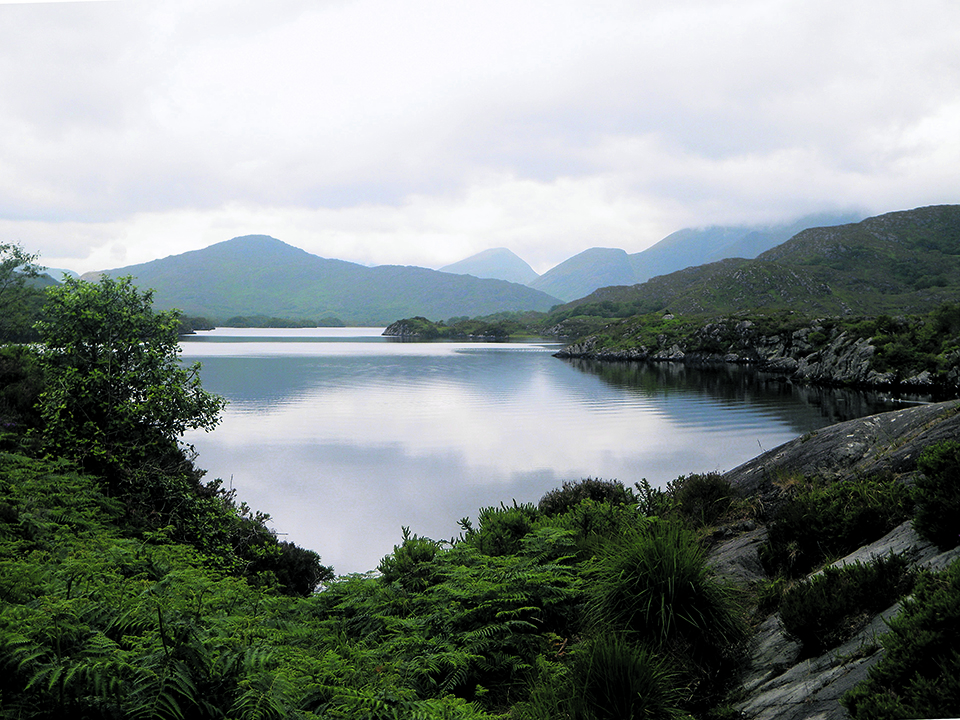 Lakes are perhaps one of the most beautiful water bodies in nature. Lakes have inspired hundreds of landscape artists, poets, and writers alike, thanks to the calming and soothing effect they have on people. Part of what makes lakes so attractive for adventure seekers is also its surroundings – lakes generally have a variety of plants, trees, and animals around it. Another allure of lakes is their location – lakes are generally present high up in the mountains, near a volcano, or somewhere low on a plain. These seven beautiful lakes we have listed here all have their own unique charms but they are all stunningly beautiful and well worth a visit.

Lakes of Killarney
Ireland
For the best experience around the Lakes of Killarney in southwest Ireland, we recommend you to boat, hike, bike, or ride in a horse-drawn carriage to access the Gap of Dunloe, a narrow, four-mile mountain pass formed by enormous glacial rocks. The lakes are located in Killarney National Park near Killarney, County Kerry, in Ireland. There are a total of three lakes – Lough Leane, Muckross Lake (also called Middle Lake) and Upper Lake. As you cruise through the peaceful, tree-lined lakes, you will pass the ruins of Ross Castle, a 15th-century tower house. It all makes for quite a fascinating adventure. When one thinks of Bali, they assume Bali is more about its beaches than its lakes but its volcanic origins mean that amid the terraced rice fields there are plenty of lakes and freshwater beauties. It would be a shame for someone to be in Bali and miss out on Lake Bratan, where the multi-tiered thatched roof of the Pura Ulun Danu temple rests along the shores of the lake, sometimes bathed in sunshine and other times wet with rain. It’s a visually stunning lake and will make for a great Instagram picture.

It’s glacial so of course it’s gorgeous. But what sets Lake Wakatipu apart from other New Zealand lakes is the mountain range stretched out behind it – the jagged peaks are so stunning that they’re named The Remarkables. As the lake spreads far and wide, with a length of 80 kilometers, it’s New Zealand’s longest lake. Therefore, for maximum scenic impact, the guides recommend taking a helicopter flight. You can also enjoy all this beauty from lakeside Queenstown, known as much for its natural assets as for the crazy adventures you can try out here, from bungee jumping to jet-boating. A list for most beautiful lakes in the world would be incomplete without Tilicho in it. The lake is on the Annapurna Circuit that is one of the best and popular trekking routes in Nepal. The lake is formed out of glacial activity at the laps of the Himalayas. The lake usually falls under a reroute while crossing the Thorang La Pass (5416 m) or the Mesokanta La Pass (5100 m), as you can travel a few extra days to view the lake while traveling to these circuits. However, reaching the lake isn’t that easy and depends on the amount of snow at the time of the trek. It’s also important to note that Lake Tilicho is a lake at the highest altitude (4919 m) on earth (for its size). Make sure you take adequate precautions to avoid altitude sickness. Lake Titicaca is a stunningly beautiful body of water with a shoreline divided between South American neighbors Peru and Bolivia. At 8,372 square kilometers, it’s larger than the entire island of Puerto Rico and features a number of islands – some with Inca ruins that are ruins of an underwater temple thought to be between 1,000 and 1,500 years old – and was discovered by archaeologists in 2000. One can plan a day-trip by boat to Taquile Island and climb the 553 stone steps up to the ruins. Lake Kawaguchi has been immortalized in photographs as the place where iconic Mt. Fuji is reflected in perfect stillness. As the area around the lake is a popular tourist destination, there are resorts, many lakeside hotels as well as windsurfing facilities, campsites, and excursion boats available. You might have to beat other tourists in motorboats to truly enjoy the lake in silence but still the shores of this watery expanse – which is about 90 minutes from Tokyo – deliver some of the best views of Fuji-San, especially when the cherry blossoms are in full bloom. The beauty here is not just about the landscape, but also because it has influenced poets and painters throughout Chinese history for its natural beauty and historic relics. Because of this, the UN declared it to be a World Heritage Site in 2011. In addition to all this, the lake also offers stellar photo-ops, from the Tang Dynasty-era Broken Bridge to pretty sidewalks. There are many temples, pagodas, gardens, and artificial islands within the lake so you will have plenty to do and see here.