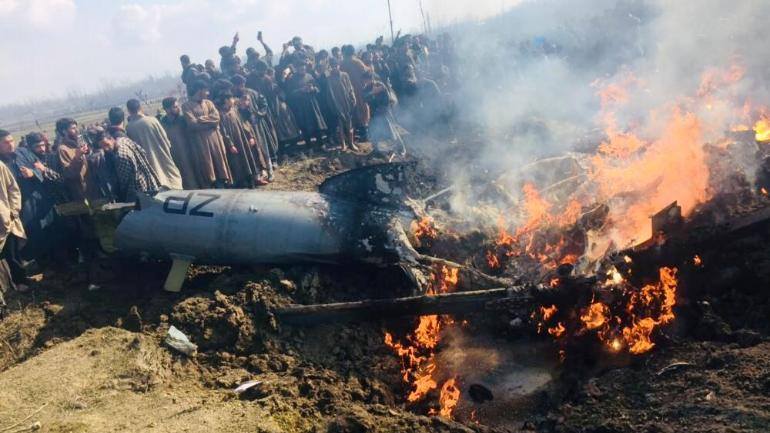 NEW DELHI/SRINAGAR, Feb 28 : Indian and Pakistani troops traded fire briefly along the contested border in Kashmir on Thursday morning, a day after the two nuclear powers both downed enemy jets, with Pakistan capturing an Indian pilot.

The United States, China and other world powers have urged restraint from the two nations as tensions escalate following tit-for-tat airstrikes in the wake of a suicide car bombing that killed at least 40 Indian paramilitary police in Indian-controlled Kashmir on Feb. 14.

“History tells us that wars are full of miscalculation. My question is that, given the weapons we have, can we afford miscalculation,” Khan said during a brief televised broadcast to the nation. “We should sit down and talk.”

Pakistan and India have fought three wars since independence from British colonial rule in 1947, two over Kashmir, and went to the brink of a fourth in 2002 after a Pakistani militant attack on India’s parliament.

Pakistan has shut its airspace, forcing commercial airlines to reroute. Thai Airways International announced on Thursday that it had cancelled flights to Pakistan and Europe, which left thousands of passengers stranded in Bangkok.

On Thursday morning troops from India and Pakistan briefly exchanged fire in Poonch, a district in Indian-occupied Kashmir, according to a statement from the Indian army.

The firing, that India claims was initiated by Pakistan and lasted for a little over an hour beginning at 0600 local time (0030 GMT), was significantly less elevated than the artillery fire exchanged by the two sides on Wednesday.

“The firing continued in intervals throughout the night. It was moderate. Even now it’s continuing,” said Shaukat Yusufzai, an administration official in the Pakistan-controlled part of Poonch.

One man was hospitalized after being hit by shrapnel, he added.

India is building more than 14,000 bunkers for families in Jammu and Kashmir state living close to the border, hoping to keep them safe near their homes rather than evacuate them.

On Wednesday evening India’s foreign ministry handed a dossier to Pakistan that it claimed detailed camps of the Pakistan-based militant group that carried out the Feb 14 attack.

The conflict comes at a critical time for Indian Prime Minster Narendra Modi, who faces a general election in a matter of months.

The latest escalation marks a sudden deterioration in relations between the two countries. As recently as November, Pakistan’s leader Khan spoke of “mending ties” with India.

The White House urged “both sides to take immediate steps to de-escalate the situation.”

U.S. Secretary of State Mike Pompeo said in a statement he had spoken separately with the foreign ministers of India and Pakistan and urged them to “prioritise direct communication and avoid further military activity”.

Pakistan’s envoy to the United States, Asad Majeed Khan, said Islamabad would like to see the Trump administration play a more active role in easing the crisis.

At the same time, he said the lack of U.S. condemnation of India’s strike on Pakistan was “construed and understood as an endorsement of the Indian position, and that is what emboldened them even more”.

China, the European Union and other countries also called for restraint. Japan’s foreign minister said on Thursday the country was concerned about the “deteriorating situation”.

The United States, Britain and France proposed the United Nations Security Council blacklist Azhar Masood, the head of Pakistan-based Jaish-e-Mohammad, the group that claimed responsibility for the Feb. 14 attack. China is likely to be oppose the move.

SRINAGAR, Dec 17: Soldiers and police fanned out across Indian-controlled Kashmir on Monday to enforce a security lockdown for a... Read More...

Nepse up for a fourth straight session
22 hours ago

I resigned on moral grounds: Gokul Baskota
16 hours ago