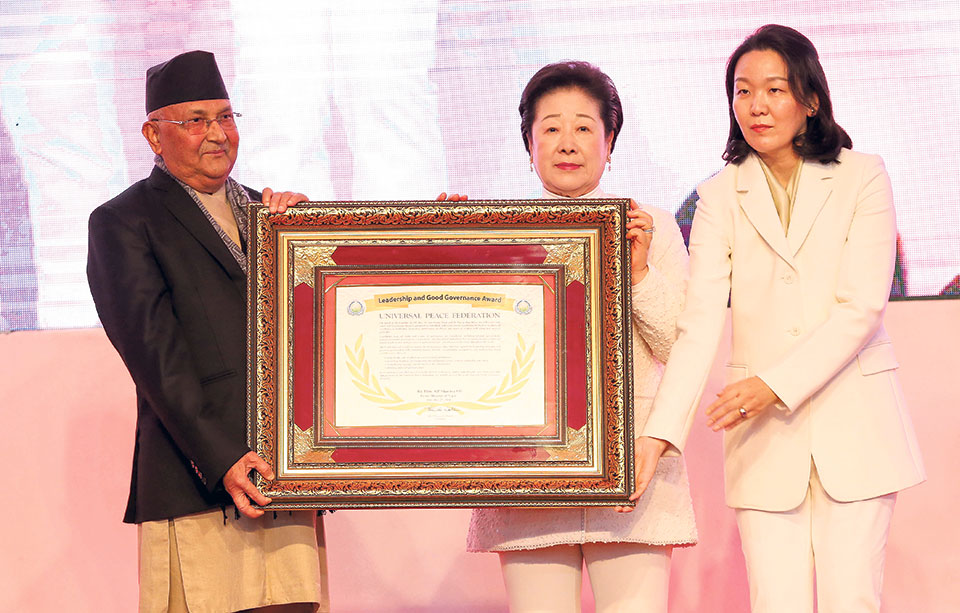 Prime Minister KP Oli receives Leadership and Good Governance Award from Dr Hak Ja Han Moon (center), the founder of the Universal Peace Federation, the organizer of the Asia Pacific Summit 2018, at Hyatt Regency in Kathmandu on Sunday. The award carries a purse of US$ 100,000. Photo: Republica

KATHMANDU, Dec 3: The two-day Asia Pacific Summit 2018 concluded on Sunday by issuing a seven-point Kathmandu Declaration for Peace and Development, appealing to the world community to study Nepal’s peace process as a successful example to resolve armed conflicts elsewhere.

The summit organized under the theme ‘Addressing Critical Challenges of Our Time: Interdependence, Mutual Prosperity and Universal Values’ by the Universal Peace Federation noted with concern the increasing threats to global security due to a variety of social, political, and economic causes and stressed the need for mutual tolerance, understanding, reconciliation and dialogue to resolve conflicts and ensure a more peaceful, equitable and inclusive world order.

“In this regard, the summit appealed to the world community to study Nepal’s peace process where, after a decade of conflict and violence, armed militants handed over their weapons to the United Nations, and together with other democratic parties participated in constituent assembly elections, rewrote the constitution, integrated two armies, restructured the state, formed the federal democratic republic of Nepal—an unprecedented and historic achievement,” read the declaration.

The declaration stated that urgent and effective action must be taken by the world community to address critical issues related to climate change, which threaten the very existence of human race and the planet itself.

“The initial effects of this man-made calamity can be observed in the melting of glaciers in the world’s highest mountains as well as polar ice caps which will ultimately submerge low-lying island nations,” it further read.

The summit called for upgrading the status of women who have endured extreme violence, reduced access to education as well as disenfranchised opportunities and including youth and students in transformational leadership roles.

8 killed, 7 missing in natural disasters in Ilam
10 hours ago