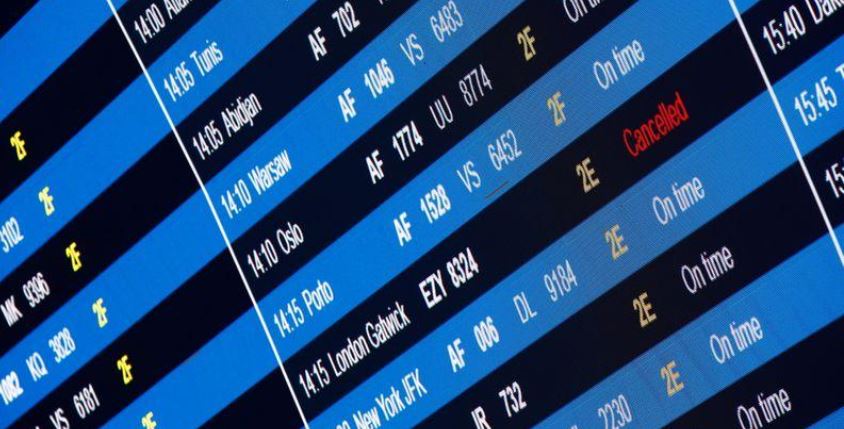 A departures board shows a cancelled flight from Paris to London Gatwick at Paris Charles de Gaulle airport in Roissy near Paris, amid the spread of the coronavirus disease (COVID-19) in France, December 21, 2020. REUTERS/Gonzalo Fuentes

India, Poland, Switzerland, Russia and Hong Kong suspended travel for Britons after Prime Minister Boris Johnson warned that a mutated variant of the virus up to 70% more infectious had been identified in the country, while Japan and South Korea said they were monitoring the situation.

A slew of countries have already suspended travel, including France, Germany, Italy, the Netherlands, Austria, Ireland, Belgium, Israel and Canada.

The discovery of the new strain, just months before vaccines are expected to be widely available, sowed fresh panic in a pandemic that has killed about 1.7 million people worldwide and more than 67,000 in Britain.

Australia said two people who travelled from the United Kingdom to New South Wales state were found to be carrying the mutated virus.

Johnson will chair an emergency response meeting on Monday to discuss international travel, in particular the flow of freight in and out of Britain. EU officials held a meeting on coordinating their response.

France shut its border to arrivals of people and trucks from Britain, closing off one of the most important trade arteries with mainland Europe.

As families and truck drivers tried to navigate the travel bans to get back home in time for Christmas, Britain’s second-largest supermarket chain, Sainsbury’s, said gaps would start to appear on shelves within days if transport ties were not quickly restored with mainland Europe.

“If nothing changes, we will start to see gaps over the coming days on lettuce, some salad leaves, cauliflowers, broccoli and citrus fruit – all of which are imported from the continent at this time of year,” Sainsbury’s said.

Shellfish producers in Scotland said they had tonnes of perishable products stranded on roads as the French border was closed. Disruption in Britain will also snarl supplies to Ireland.

“No driver wants to deliver to the UK now, so the UK is going to see its freight supply dry up,” France’s FNTR national road haulage federation said.

The global alarm was reflected in financial markets.

European shares slumped, with travel and leisure stocks bearing the brunt of the pain; British Airways-owner IAG and easyJet fell about 8%, while Air France KLM lost about 7%.

The British pound tumbled 2.5% against the dollar, and was on course for its biggest one-day drop since March, while the yield on two-year UK government bonds hit a record low.

“Sick Man of Europe”, the Daily Mirror newspaper said on its front page beside a picture of Johnson while the Sun newspaper said “French show no merci”.

Johnson cancelled Christmas plans for millions of British people on Saturday due to the more infectious strain of the coronavirus, though he said there was no evidence that it was either more lethal or caused a more severe illness.

The new variant contains 23 different changes, many of them associated with how it binds to cells and enters them. British Transport Secretary Grant Shapps said Britain had done some of the best global analysis of the mutations of the virus so it was simply seeing what was already at large in other countries.

Shapps said getting the bans lifted as swiftly as possible was his priority but that given British preparations for the end of the Brexit transition period on Dec. 31, the country was well positioned for disruption.

The British government triggered plans it had for stacking up trucks in the southeast county of Kent - part of its plans for potential disruption when the United Kingdom exits the EU’s orbit with - or without - a trade deal at 2300 GMT on Dec. 31.

Talks on a Brexit trade deal were due to continue on Monday.

“This is a serious situation as the stockpiled goods expected here are for Christmas and to help stabilise January,” Jon Swallow, a director of the British logistics group Jordon Freight, told Reuters.

“This shows how fragile the cross-channel route is.”

The new virus strain has been identified in Britain at a time when COVID-19 cases have surged in several Asian countries that had previously successfully contained the pandemic. The spikes have prompted localised lockdowns in some countries and more aggressive testing.

South Korea, which imposes a 14-day quarantine on everyone entering the country, said it was reviewing new measures for flights from Britain, and would test twice those coming in from there before they were released from quarantine.

New cases climbed to over 1,000 a day in South Korea several times last week. It reported on Sunday an outbreak in a Seoul prison where 188 inmates and staff were infected.

Thailand said on Sunday it was testing tens of thousands of people, and extended curbs on movement, following its worst outbreak yet that began at a market in a province that is a centre of the seafood industry and home to thousands of migrant workers.

Australia, where cases in Sydney have flared in recent days, cancelled dozens of domestic flights on Monday. New South Wales, which has reported 86 new local cases since Thursday, ordered more than a 250,000 people into a lockdown, though officials stressed the infections were not the UK strain.

India extends suspension of flights with Britain to Jan. 7

BENGALURU, Dec 30: India has extended until Jan. 7 its suspension of flights with Britain, the civil aviation minister said,... Read More...

Britney Spears fans are hoping for better success in acquiring tickets for her new UK tour after the website crashed during pre-sale yesterday... Read More...

TERATHUN, Jan 21: The victims of the massive fire which struck Sankranti Bazaar on December 16 received support from the... Read More...