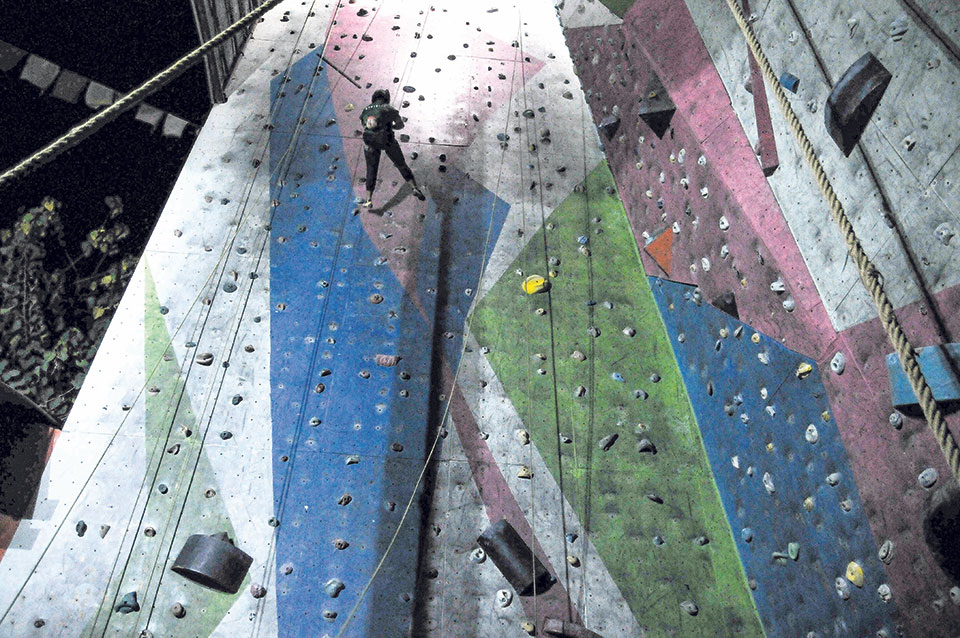 As Astrek Climbing Wall Pvt. Ltd gears to host another series of Nepal’s biggest climbing competition, Climbmandu, along with North Face and Black Diamond, there is a certain buzz about rock climbing. Often touted as a sport for thrill seekers, rock climbing clearly has a huge potential in a mountainous country like Nepal.

However, the fact remains that the trend is only just about taking off. Astrek Climbing Wall Pvt. Ltd, for one, has been a prominent player in ushering in and promoting rock climbing and for the fourth year now, Niraj Karki, manager of Astrek, says they are looking forward to attract and inspire more Nepalis.

“If I had to explain what rock climbing feels like, I’d say it is sort of a mix between dancing and meditation,” says Karki. Whilst being physically challenging, he clearly feels the sport is also a stress relieving exercise just like relaxing meditation. Karki has been with Astrek ever since the launch of the first Climbmandu event but along with that he is also Nepal’s first national wall climbing champion, having won the feat in 2012.

He further continues, “While climbing can be a competitive sport like any other, you will usually find that people climb for themselves. It’s about how well you can climb and how high you can get yourself.”

And it is not only Astrek’s gym walls that he, their team and members train to conquer, Karki shares that they run commercial outdoor climbing trips and, every now and then, even organize teams to open up new routes.

In fact, just last month, Astrek’s Facebook page shared a video of one such trip. Coincidentally it features Saman Shrestha, the Roadies winner who happens to also be an avid climber, as he along with other Astrek climbers and team visit the hills in Kakani. They say the video is to show the wonders of outdoor climbing in Nepal.

Shrestha and the team of other climbers (consisting of both men and women) were apparently tipped off of a likely climbing spot near Ranipauwa so naturally they headed down there with their gears. In the video, you can watch them as they get down to making a route to climb, trying out various positions and techniques. At one point, they even get down with a brush, scrubbing away the moss off the stonewalls of their chosen hill.

Karki informs that new routes for rock climbing open every year. Like Kakani, they have tried out spots in Hattiban near the Pharping side, Shivapuri, Nagarkot and Dumre, Bimal Nagar which fall on the way to Pokhara. “There is so much to explore. I bet as we go higher, there will be more places for us to climb,” he says.

And that brings us back to events like Climbmandu because indoor and outdoor climbing isn’t all that different. Promotion and development of one, work as promotion and development of another. This year, along with local climbers and tourists around Kathmandu, they have also invited some of India’s best climbers. The hope is to give Nepali climbers and climbing enthusiasts the exposure and inspiration they need.

Some popular spots for rock climbing in Nepal (Karki stresses that outdoor rock climbing is obviously more dangerous than indoor climbing so it is necessary for those interested to go with teams. Proper training and gear are also mandatory.)

While it is true that the sport is still in its infancy here in Nepal and that many potential climbing routes still remain unexplored, there are some spots that have become very popular among climbing enthusiasts.

Rock climbing near Kathmandu valley
Two of the oldest spots near Kathmandu that have been used for rock climbing are in Hattiban and Nagarjun. While you will have to travel around 15kms southwest of the capital to reach Hattiban, it only is about three kilometers northwest of Nagarjun.

Nagarjun rock climbing is said to have about 20 well-bolted routes and is often recommended for beginners as well. A handful of routes around Hattiban, on the other hand, is said to be better suited for seasoned climbers. If you wish to test your climbing skills, you shall find suitable challenges here.

Rock climbing outside the capital
Bimal Nagar is a relatively new rock climbing spot. You shall find it on the way to Pokhara. The rock walls around the area were found to be naturally suitable for the sport. Further, it’s said that once you do win the feat and reach the top, you can enjoy the view of Mt. Manaslu as well as the Marshyandi River.

If you wish to make a proper trip out of your rock climbing adventure though, the Khumbu rock climbing might just be what you are looking for. This spot is based in the Everest region and you will indeed have to get to Thame via Lukla and Namche. Needless to say, this will require higher level of expertise. You can seek assistance and guidance from professional rock and mountain guides as well.

I wasn’t ever the sporty kind. I just thought it would be fun to give it a try. But the more I was exposed to rock climbing, the more I enjoyed it and the more dedicated I became. I have been involved in the sport since late 2014.

Rock climbing isn’t like any other sport. There is an adventurous element to it. It is also an individual sport in many ways. Whether I’m climbing the gym walls or some portion of a hill somewhere, I become very focused. It’s like there is nothing else around you, the only thing matters is the next movement. You go in a bit of a trance. And even when you finish, the goal is to go higher. My favorite outdoor experience so far has been Hattiban.

The training is varied as well. From resistant bands exercises to yoga and cross fit, you can use elements of all the disciplines in rock climbing. It’s not like I’m thinking about a career in the sport yet, but it has certainly become a professional hobby.

My favorite thing about rock climbing is thge satisfaction at the end of your climb. i always push myself to try different routes, ones that are more challenging than the previous one. So, when you overcome that and succeed, it is very satisfying.

I train regularly, about fore times a week in the evenings. I also participate in competitions as well and the moments that I have won are memorable indeed. At the moment, I'm a bigger fan of indoor gyms than outdoor rock climbing. The problem is there aren't many climbing spots. It's really expensive to create such routes outdoors. I have tried all the available ones but it's not fun to keep going back. At least, at the gym, there is the option of creating new routes and challenging yourself.

When we compete in international events, we see just how much more effort we have to put in for this sport. We are lagging behind but events like Climbmandu help stimulate the scene.

LAMJUNG, Jan 10: As the products made of natural Allo fiber are gaining good market values, more women in Lamjung are... Read More...

SOLUKHUMBU, June 2: This year's spring climbing season has ended with the total 500 climbers having made it to the... Read More...