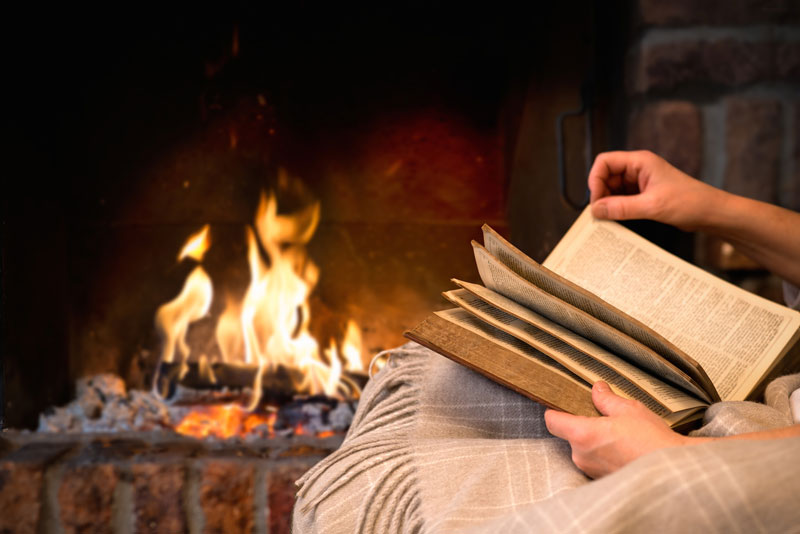 Every winter when the temperature starts to dip, I start thinking of fireplaces. Reading books by the fireplaces is an amazing experience
Fire in itself is very interesting thing and has been around for a long time. It’s just the matter of memories associated with it.  My earliest memory of fireplace is in Kopundole when my father bought a house for us during the fifties.  I remember moving in the house to find that the previous owners had planted potatoes and had taken all the big potatoes with them, but had left the small ones in the land in front of the house. So we built a fire and roasted the small potatoes. I still remember the wonderful taste. The other major memory from my past is from Assam, Banares, Nepal and the US.  Fires have fascinated me since I was a child.  As a child in Assam, fireplace (aghena) was one that was in the corner of the kitchen away from the main cooking area with an iron vessel, full of milk constantly boiling, from morning till night.

We sat around and talked about different things and of course learned to light a fire in the ‘aghena’.  I remember my maternal grandfather cautioning us not to play with the fire. We looked forward sitting by the fire listening to the unique political stories from during the British Raj our grandfather told us.  With these were the formal cooking wood stoves (chulo) that had two openings for cooking meals. Unfortunately children were not allowed to touch the main chulo in the upper part of the kitchen.  Still those were amazing days!
The other chulo that I remember very well is the coal stoves used for cooking in Kolkata during the sixties.  They were odd shaped, a modification of the iron bucket.  Now this was something new for me.  I had never seen fire in a bucket. My main point of curiosity was how the fire was created from everything that was cold.  Regardless of whether it was coal or wood it caught on fire with the help of paper and the magic flaring matchstick.  My knowledge of cooking was further enhanced while living in Banares.

One summer evening I was standing on the verandah in our old house looking towards the empty land in front of our house.  I saw a person crouching on the ground, doing something.  I looked closely and figured out that he was about to make dinner.  His kitchen consisted of a small aluminum thaali, a glass and one knife. Next, he pulled out some cow dung cakes.   I had no idea what he would do next.  I watched as he poured some flour on his thaali, added some water and mixed it to make some small balls.

Soon enough he had a small amount of satu on the thaali, garnished it with cut onion and some green chilies and salt. He stuffed this satu in each of the small balls of flour and rolled them back into balls again ready to cook. He positioned a few cow-dung cakes and placed the dough balls in such a way that the fire would cook it.  He lit the fire and waited for the cake to completely burn out. He then pulled out the roasted semi charred dough balls and started eating them with much relish.  I was amazed. Later I found out these dough balls were called litti and the method of cooking it is called bhasana. This was also a poor man’s means of cooking dinner. Amazing, isn’t it?

Some years later I had the opportunity to accompany my husband to Hawaii.  It so happened that they were going on a field visit to Maui (another island of Hawaii) from their apartment and I had the opportunity to accompany them.  When we landed at the airport in Maui, I found out that we were invited to a Luau (a traditional Hawaiian feast accompanied by entertainment and lots of food). So we headed to the house straight from airport.

When we reached there I saw few men digging a pit in front of the house.  I was told they were preparing a Kālua (a traditional Hawaiian cooking method that utilizes an ‘imu’: a type of underground oven).  I was totally confused. I had never heard of the word. So I asked our host.  I was told the underground oven is in fact a pit usually about six feet long, four feet wide and three feet deep. Rocks were then placed in the pit and a roaring fire built inside the pit.

When the rocks became sparkling red, all the food including a whole pig was placed inside and then sealed to retain cooking heat long after the flames burned down. We were told that it took about six to seven hours to get everything cooked so we left the place and went for sightseeing.  By the time we got back in the evening, the pig was out of the pit.

For me this was amazing.  Never did I even dream of cooking in a pit.  My only experience of outdoor fire was a campfire during training for National Development Service (NDS).

My next experience was participating in a barbeque (BBQ) party.  I had no idea what a BBQ party was all about.  Later I found out barbeque was both a cooking method and an apparatus. I being a vegetarian had no interest on the roasted chicken over the BBQ grill.

This for me was just another way of cooking meat.  I was amazed at the different forms of fire dispensers that were used to cook food.  I realized my knowledge was constantly increasing with all the exposures. My favorite, however, is a nice fireplace.

I had an opportunity to enjoy a proper fireplace in a resort in Saurah, Chitwan few years ago, when we decided to celebrate New Year there.  By the time we reached the resort, a big roaring fire was burning in the fireplace in the middle of the living area. I decided to sit by and enjoy the heat radiating from the fireplace. All that fun and warmth made me think of the different forms of fireplaces and the purposes they served.

Finally, every winter when the temperature starts to dip, I start thinking of fireplaces. I still like to sit by the roaring fire in the fireplace during the winter and read books or watch television. It sure is an amazing experience to roast marshmallows and potatoes and eat them. Try it my way next winter, will you?

PARSA, July 3: A 14-year-old girl died in an incident of fire at Tulasibarwa VDC in the district today morning. Read More...